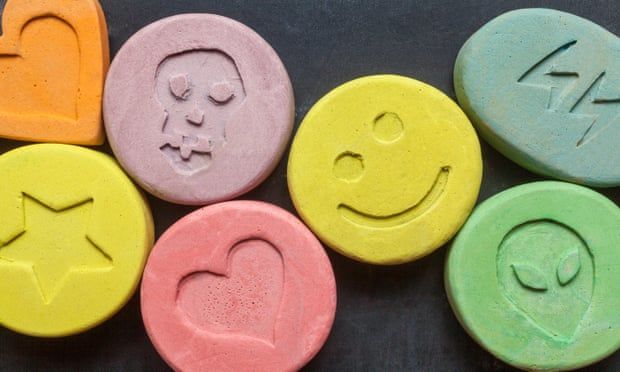 Covid and crackdowns also blamed as researchers find half of pills sold as MDMA at festivals in England contained none of the drug
Summer festivalgoers are being warned that an “unprecedented shift” in the drug market caused by a combination of Brexit, Covid lockdowns and police operations against supply chains has led to a sharp and potentially harmful increase in fake MDMA.

Criminologists and chemists have found that almost half of substances sold as MDMA (ecstasy) at festivals in England last year did not contain any of the drug.

In the first peer-reviewed scientific study of the trend, experts say that many pills bought by party-goers as MDMA were made up of ingredients such as cathinones, a new psychoactive substance (NPS), and caffeine. Some users reported ill-effects such as panic, psychosis and prolonged insomnia.

The scientists warn that with the impact of Brexit still being keenly felt on legal and illegal markets, suppliers may continue to flood festivals and other events with fake MDMA, posing risks to users.

Michael Pascoe, a research associate at Cardiff University and co-lead author of the study, said: “This is the first peer-reviewed article that confirms there was an unprecedented shift in the quality of UK ecstasy following Brexit and the lockdowns. As well as noticing this effect at festivals, the study also presents wider UK data that confirms the same effect was seen across the whole country.”

The main plank of the research is fieldwork carried out by the drug-checking charity The Loop, whose researchers visited three English music festivals last summer and tested hundreds of pills that buyers had believed were MDMA in a mobile laboratory.

The researchers found that 45% of substances sold as MDMA contained none of the drug – and instead were made up of substances including cathinones and caffeine. Each was identified as the primary component in a fifth of the samples. In 2019, when the research was carried out at the same festivals, only 7% of the pills tested did not contain MDMA.

Their report also flags up research from the harm reduction project Wedinos that found about 15% of products sold as MDMA that it tested in 2021 contained only cathinones and 14% only caffeine. Two-thirds of the product sold as MDMA that it analysed did contain the drug.

Pascoe said: “During this unprecedented turbulence in the drug market, substances that look like MDMA were mis-sold to unknowing customers.”

The report, published in the journal Drug Science, Policy and Law, says the findings suggest a “substantial shift in the UK drugs landscape between 2019 and 2021” and adds that “adulteration poses additional unknown risks to the health of people who use illicit drugs”.

It suggests that Covid lockdowns led to MDMA suppliers curtailing or halting production. When in the summer of 2021 nightclubs and festivals began to reopen, there was a sudden, high demand for “party drugs” but MDMA manufacturers, especially in the Netherlands, were slow to increase supply.

The report, led by The Loop, including researchers from Cardiff University and the University of Liverpool, says that dismantling criminal and dark web platforms may also have disrupted the availability of MDMA, and adds that the impact of Brexit, ranging from lorry driver shortages to fluctuations in currencies, probably played an important part.

It concludes: “This study highlights a period of unprecedented turbulence in the UK drug market. We suggest the shortage may be linked to Brexit-related disruptions to legal and illicit supply chains, combined with the stalling of MDMA production.”
#Covid
Add Comment