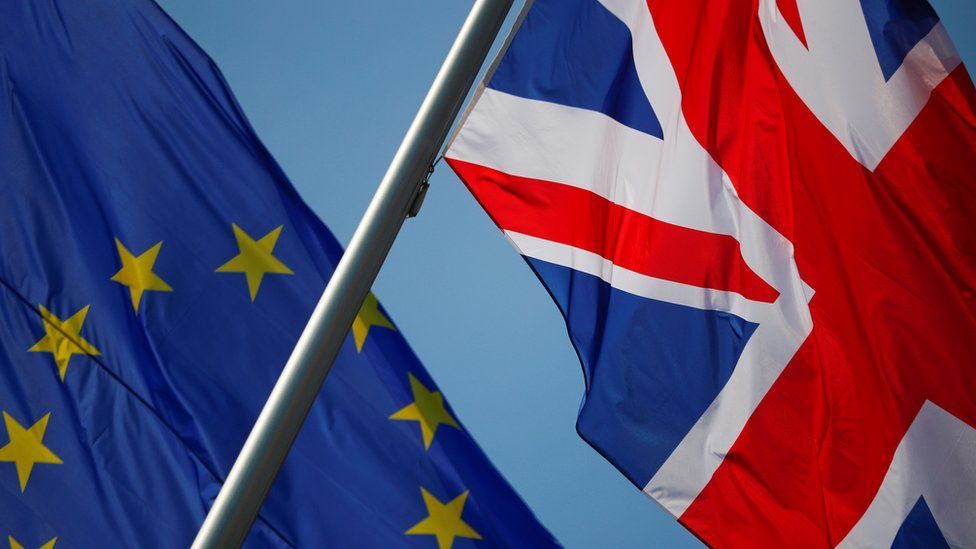 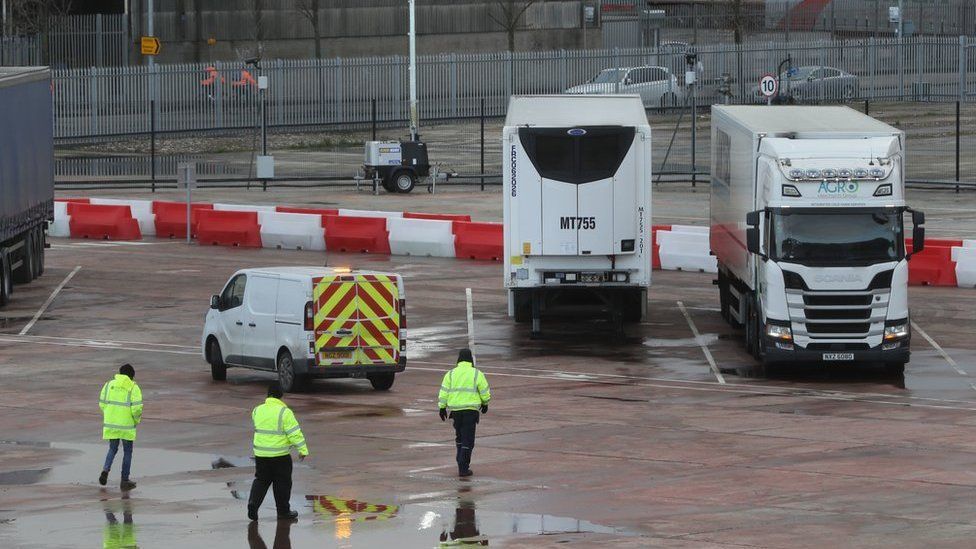 Getting goods across the Irish Sea border involves a range of new processes, checks and documentation

Northern Ireland has remained a part of the EU's single market for goods so products arriving from GB undergo EU import procedures.

The grace periods mean procedures and checks are not yet fully applied.

The first of these periods will expire at the end of March, but the UK has said it will be extended until October.

European Commission Vice President Maroš Šefčovič said the move amounted to "a violation of the relevant substantive provisions" of the Brexit deal on Northern Ireland, known as the NI Protocol.

He said the EU would respond in accordance with the "legal means" established by the protocol and the wider Brexit deal.

Following a call on Wednesday evening between Mr Šefčovič and Lord Frost, the Cabinet Office minister with responsibility for EU relations, a UK government spokesperson said "official-level notification" of the move was made to the commission earlier this week.

The spokesperson said Lord Frost underlined the extension was needed for "operational reasons" and such measures were "well precedented in other international trade arrangements, and that they were entirely consistent with our intention to discharge our obligations under the Protocol in good faith". 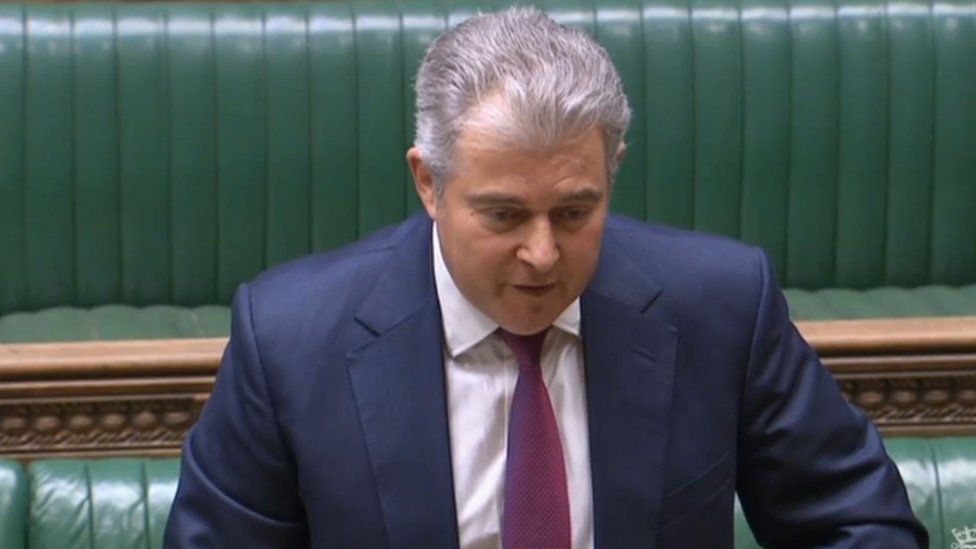 Irish Foreign Affairs Minister Simon Coveney said the UK government's move clearly undermined its commitment to the implementation of the protocol and described the unilateral decision as "deeply unhelpful".

He said he had made his regret over the decision clear to Lord Frost and Northern Ireland Secretary Brandon Lewis.

The grace period affects supermarkets and other retailers, which face having to provide export health certificates for all shipments of animal products.

"For supermarkets and their suppliers, as part of the operational plan the UK committed to at the UK-EU Joint Committee on 24 February, the current Scheme for Temporary Agri-food Movements to Northern Ireland will continue until 1 October," said a government statement.

"Certification requirements will then be introduced in phases alongside the roll out of the Digital Assistance Scheme."

It is understood the government is describing this to the EU as an "operational easement", rather than a formal extension of the grace period.

It is using the example of how the Irish government temporarily relaxed safety and security declarations on products arriving from GB in January.

It does that by keeping Northern Ireland in the EU single market for goods.

That has created a new trade border with Northern Ireland and the rest of the UK.

Unionists oppose the protocol, arguing that it has damaged internal trade from GB to NI and poses a risk to the future of the UK union.

But anti-Brexit parties in NI say that it must be implemented in full, and that issues should be worked out through joint UK-EU processes.

Northern Ireland's First Minister Arlene Foster welcomed the move and said the EU had refused to deal with an issue that "would have caused a huge amount of problems for us at our ports".

The DUP leader added that it showed the UK government "can go further, so we need to see permanent solutions".

However, her deputy first minister, Sinn Fein's Michelle O'Neill, described the government's decision as "another unilateral attempt to override what has been agreed".

"What everyone should be focused on is achieving agreement to find solutions to the issues that are outstanding, but it's very clear the protocol must be made to work."

Simon Hoare, the chairman of Westminster's NI Affairs Select Committee, tweeted that the case for extending the grace periods was "compelling" but that the unilateral move struck him as an "approach most likely to have negative/unhelpful consequences".

The Labour Party's shadow NI Secretary Louise Haigh said the Prime Minister should "show some responsibility and find the lasting solutions with the EU that are the only way to give businesses the certainty they are crying out for". 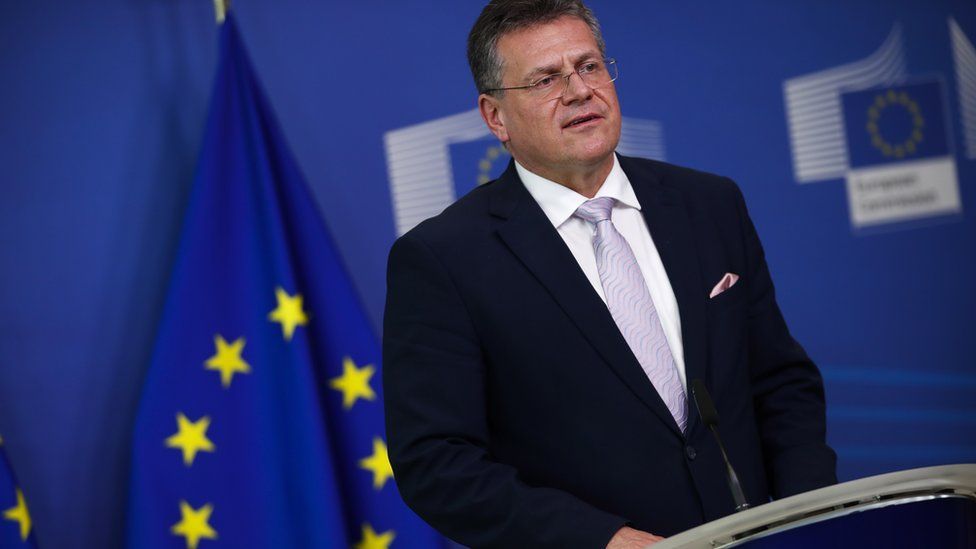 Ulster Unionist Party leader Steve Aiken, meanwhile, described the protocol as "unsalvageable" and criticised the EU and Irish government for reacting in a "dramatic, over-the-top manner to what are minimal changes".

"Simon Coveney and his EU counterparts are showing gravity-defying levels of arrogance and hypocrisy, given their past actions," he added.

The government said further guidance will be provided later this week on a grace period for parcel movements from GB to NI.

It is due to to end on 1 April, meaning all parcels would need customs declarations.

Guidance will also be set out in regard to the issue of soil attached to the movement of plants, seeds, bulbs, vegetables and agricultural machinery.

Under the terms of the Brexit deal, soil from Great Britain is not permitted to enter Northern Ireland as it conflicts with EU plant regulations.