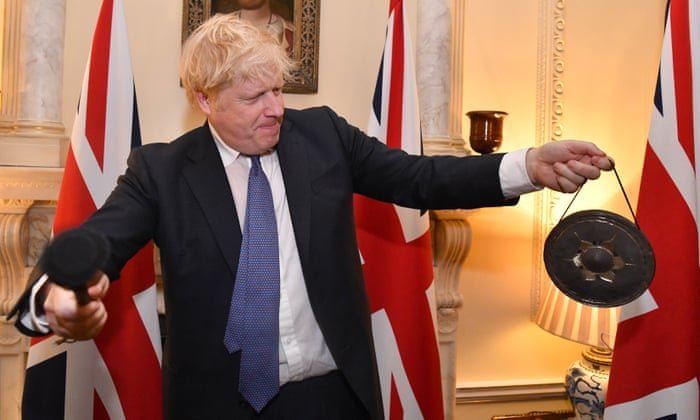 Prime minister pledges to make no concessions to EU as he salutes ‘a turning point in the life of our nation’
No sooner had the union jacks been lowered in Brussels and Strasbourg, after 47 years of tortured British membership, than Boris Johnson was preparing to launch the UK into yet another uncompromising battle with the remaining 27 nations of the European Union.

The morning after he had finally achieved his goal of removing the UK from the European club, Downing Street released photographs of the prime minister triumphantly striking a gong on the stroke of 11pm (midnight Brussels time) as this country took its leave. The text from a short speech he made as the clock struck 11 was also released.

“I want you all to remember you were here tonight after 11pm, in Downing Street, when we got Brexit done,” Johnson told a gathering of advisers, civil servants and Brexit supporters inside No 10.

As he hit the gong with glee, he was just flexing his muscles for more combat with the UK’s now ex-partners.

There now begins an 11-month transition period during which the prime minister and his government will face the herculean task of securing a future trading and security relationship with the EU. If there is no deal by 31 December, the UK will face a cliff-edge descent into the economic unknown.

Before phase two of the process, No 10 went out of its way yesterday to make clear that Johnson – emboldened at having achieved Brexit where Theresa May had failed – will give not an inch when the fight resumes.

The prime minister will make a speech on Monday saying the UK will be seeking to make a hardline trade deal in less than a year that is “at least as ambitious” as that struck by Canada with the EU in 2017, after seven years of very difficult negotiations. And he will make no concessions to ease an agreement into being.

The EU is making clear its bottom lines. It insists that the UK must accept alignment with its rules on workers’ rights, the environment and state aid, as the price for a deal (fearing that otherwise the UK will steal a competitive advantage). But Johnson will say that his government will make no such concessions, under any circumstances. There will be no alignment whatsoever.

The EU is also insisting that its members should be allowed access to UK fishing waters before any trade deal can be reached, and that it wants a future role for the European court of justice in any disputes with the UK. Again Johnson will resist.

Downing Street also did nothing to knock down reports that the UK is preparing to impose full customs and border checks on all European goods entering Britain, to try to increase pressure on the bloc to give way in the negotiations, which are due to start next month.

Adam Marshall, director general of the British Chambers of Commerce, warned that UK companies would pay a heavy price for delays caused by such checks. “Both importers and exporters need the UK government to take practical steps to ensure the flow of goods through our ports from 31 December,” he said. “Costs add up with every additional procedure or delay – and every pound spent on new compliance measures would be a pound less for training, equipment or securing new customers.”

A government source said last night: “There are only two likely outcomes in negotiation, a free trade deal like Canada or a looser arrangement like Australia – and we are happy to pursue both.”

EU sources responded by saying that if the British government sought an Australian-style deal involving tariffs on some goods, it would be “impossible” to reach an agreement by the end of 2020.

“Given No 10’s timeline of 11 months – in practice, only eight [for a deal to be ratified] – for negotiations, the only possible outcomes by the end of the year are a zero-tariffs, zero-quotas free trade agreement or no deal and World Trade Organisation terms,” the source said. “It isn’t serious to suggest that a line-by-line tariff negotiation can take place in that timeframe. It would be materially and politically impossible.”

Last night, Keir Starmer, the shadow Brexit secretary and the favourite to succeed Jeremy Corbyn as Labour leader, said the kind of Brexit Johnson was pursuing would damage the country and its economy.

Starmer said: “Johnson either doesn’t understand or doesn’t care about the damage the Brexit deal he is proposing will do to the country.

“It would weaken workers’ rights, consumer and environmental standards, and lead to significant barriers to trade with the EU. By choosing to pursue a hard Brexit, he will also ensure that the Northern Irish economy becomes more detached from the rest of the UK.”

Dacian Cioloș, a former prime minister of Romania who leads Emmanuel Macron’s Renew group in the European parliament, said that Brexit had brought the relationship between the UK and EU to “a low moment”.

“Nevertheless, I am confident that both the EU and the UK will find the best agreement to collaborate in the future,” he said. “As in any relationship, this agreement must be balanced and doors have to be opened on both sides. The extent to which the EU can be open and make concessions will depend strongly on the extent to which the British government will be willing to cooperate. But, obviously, a deal can never be as good as EU membership.”Brexit may be done in one respect, but in many others it has a long way to go.
#Boris Johnson
Add Comment