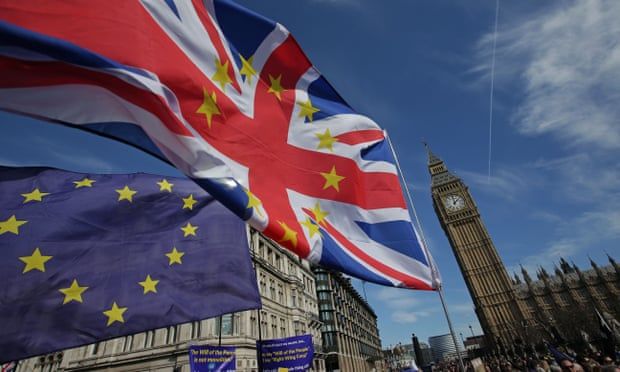 Brexit cost will be four times greater for UK than EU, Brussels forecasts

Departure to cost EU 0.5% of GDP but UK 2.25% by end 2022, according to first official estimate since deal was agreed
The economic blow dealt by Brexit will be four times greater in the UK than the EU, according to the latest forecasts by Brussels.

A month into the new relationship, the European commission said the UK’s exit on the terms agreed by Boris Johnson’s government would generate a loss in gross domestic product (GDP) by the end of 2022 of about 2.25% in the UK compared with continued membership. In contrast, the hit for the EU is estimated to be about 0.5% over the same period.

Equivalent to lost economic output worth more than £40bn over two years, the commission said that although worse damage had been avoided thanks to the 11th-hour trade deal signed in December, substantial barriers to trade still remained and would come with a heavier cost for Britain.

“While the FTA [free trade agreement] improves the situation as compared to an outcome with no trade agreement between the EU and the UK, it cannot come close to matching the benefits of the trading relations provided by EU membership,” the commission said in its winter economic forecast.

Most mainstream economists have already forecast that Brexit will deliver a bigger hit to the UK economy than to the EU. However, the figures compiled by the commission mark the first official EU estimates made since the deal was agreed.

The forecast comes as the UK government comes under mounting pressure over delays to cross-border trade after a month of the new rules, with business groups warning that further disruption is expected as more new border checks come into force later this spring.

The deal agreed between London and Brussels included maintaining zero-tariffs – taxes on the sale of goods across borders – between the UK and the EU. However, businesses have faced additional costs and delays from new paperwork, customs checks and confusion over the new system.

The commission said the “trade shock” from these so-called non-tariff barriers amounted to the equivalent of a tax on imports worth 10.9% for the EU and 8.5% for the UK. It said there was a bigger impact on growth for countries with a higher share of goods trade with the EU – such as Ireland – and that the lack of a deal on services – which form 80% of the UK economy – would hurt the UK, as well as EU nations where doing service-sector business with Britain was more important.

However, it said the last-minute trade deal helped to reduce the negative effect by about a third for the EU and a quarter for the UK compared with a no-deal scenario and reverting to World Trade Organization terms.

The winter 2021 economic forecast projects that the EU economy will grow by 3.7% in 2021 and 3.9% in 2022 as the impact of tougher lockdown measures at the start of 2021 give way to a vaccine-fuelled recovery later in the year. It said the EU economy should return to pre-pandemic levels in 2022, earlier than previously thought, but added that it would take longer for some nations than others.

The economies of Italy and Spain are not expected to return to pre-crisis levels until later than 2022, as countries with a higher dependence on tourism largely in southern Europe suffer from a slower return of international travel.

The Bank of England forecasts growth of 5% in the UK in 2021 and 7.25% in 2022, with GDP returning to pre-Covid levels towards the end of the yearThis, it said, would be faster than the EU thanks to better progress in administering the Covid vaccine.
#vaccine  #Covid  #Boris Johnson
Add Comment