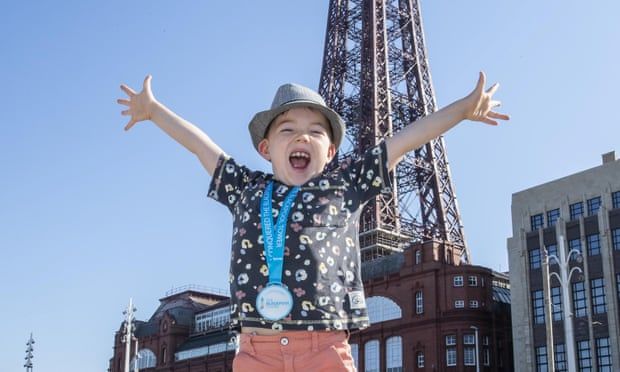 Some little boys are obsessed with Lego. Others can’t get enough of dinosaurs. But it is Blackpool Tower that has captured one six-year-old’s imagination.

Now Charlie Barratt has achieved his dream by becoming the voice of the attraction’s lift after news of his superfandom spread.

Charlie did a project about the tower at school, recording his own version of the lift’s existing speech.

One of his teachers contacted Kenny Mew, the tower’s operation manager, and told him about Charlie’s love for the 518ft (157m) structure.

Mew told BBC Radio Lancashire: “His school reached out to me and said they had this young boy who was passionate about Blackpool Tower and had actually recorded the lift speech and I was thinking to myself, ‘How’s he done that?’

“I played it back and he had the speech word for word that we’d had recorded already in the lift and it just sounded amazing. And we thought, ‘Do you know what? We’re going to give Charlie the opportunity to do it.’

“He was absolutely brilliant, he’s done an amazing job, and we’re really proud of what he’s done.”

Charlie was invited into a professional recording studio to perform his version and his mum, Wendy, is as thrilled as he is. She told the BBC: “He absolutely adores the tower and the passion that he shows for it is amazing.

“We are the proudest parents, he’s just taken it all in his stride. His last topic at school was about Blackpool Tower, so he knew all the facts and he was firing them out across the classroom.

“He loves it and he’s been like that since [he was] very little really, since we first took him up there. From the minute he could walk, really.”

As well as the lift, there are plans afoot for Charlie to lend his voice to other areas in the future.