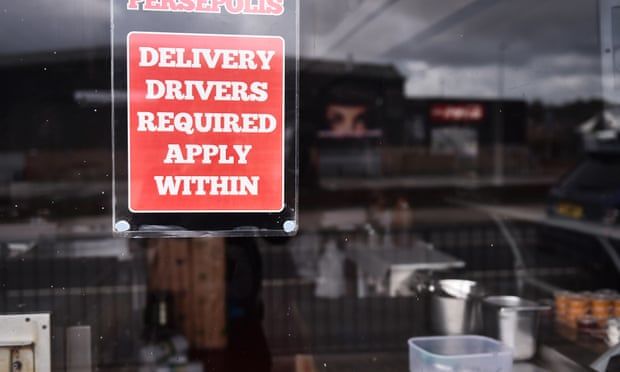 Analysis: labour market appears to have perked up with UK jobless rate at 4.7% but labour shortage ‘traffic jam’ could ease soon
Chefs needed. Waiting staff required. Hotel porters, cleaners and front-of-house wanted, apply within. Walk down many high streets in Britain today and the picture is the same. Job vacancies have increased and employers are struggling to find staff.

This takes some explaining because the economy is still operating below its pre-crisis level. The total number of hours worked, as good a guide as any to the tightness of the labour market, is 5% lower than it was when the pandemic first arrived in the UK.

One theory is that this is a temporary phenomenon caused by the bottleneck effect of employers experiencing a shortage of workers as lockdown restrictions have been eased, with many looking for people all at the same time. The Resolution Foundation thinktank says it is a bit like a fire alarm: the premises are emptied but once the all-clear is given there is a queue to get back in the building.

Another explanation is that labour shortages are a sectoral problem, affecting restaurants, bars and hotels but not the rest of the economy. The survey evidence suggests, however, that while shortages are most acute in hospitality firms, in other parts of the economy – in construction, manufacturing and business services – there are also vacancies.

A third strand of thinking is that the furlough is indirectly responsible, because many workers in low-paid sectors found new, better-paid jobs or, in the case of EU workers, decided to sit out the pandemic outside the UK. And tougher migration rules since the turn of the year mean it is now more difficult to rehire those migrant workers.

The Treasury thinks the improvement in the labour market is for real. It anticipates a rise in unemployment in the autumn when wage subsidies end but hopes the impact will be temporary. Few in Whitehall expected the official jobless rate, of 4.7%, to be as low as it is after such a deep slump in output.

At the Bank of England the issue is whether labour shortages translate into permanently higher wage inflation. The current view of Threadneedle Street’s monetary policy committee is that while the labour market is tighter than it was, it is not as tight as it was pre-crisis when annual earnings growth was modest.

Signs in recent weeks of a small dip in job vacancies support the idea that bottlenecks are beginning to clear.
Add Comment