Boris Johnson: Why Conservatives are urging PM to resign

Boris Johnson's future as UK prime minister is in greater jeopardy than ever before.

Months of unremitting political turbulence spiked on Tuesday when the health secretary and chancellor quit within 10 minutes of each other over the PM's handling of sexual misconduct allegations against a Conservative Member of Parliament (MP).

This triggered a trickle of resignations and letters of no confidence from junior ministers and MPs that on Wednesday became a flood.

That evening, a group of senior ministers went to Downing Street to try to persuade the PM to resign.

But so far Mr Johnson remains defiant and says he has no intention of resigning given his "colossal mandate" from voters at the last election. Cabinet ally Jacob Rees-Mogg dismissed the campaign against him as a "squall".

Tory MP Andrew Mitchell told the BBC: "It's a bit like the death of Rasputin. He's been poisoned, stabbed, he's been shot, his body's been dumped in a freezing river and still he lives."

So how did we get here?

A drunken night out in Westminster

Last Thursday Noa Hoffman, a 24-year-old just four days into her job as a political reporter for the Sun newspaper, broke the news that a Conservative MP had resigned from his role as a party whip following a boozy evening at the Carlton private members club.

In his resignation letter, Chris Pincher told the PM he "drank far too much" and "embarrassed myself and other people".

But the matter turned out to be far more serious: he is alleged to have grabbed two men at a private members' club, touching at least one of them on the groin.

Two things then happened. The government briefed the media that Mr Pincher had recognised he had behaved badly and so would keep his job as an MP and face no further action.

But behind the scenes Conservative MPs were furious.

Similar allegations of sexual misconduct had been made against Mr Pincher in the past. Yet Mr Johnson had put him into a position of power as the party's deputy chief whip - enforcers who ensure MP discipline but who are also responsible for pastoral matters. 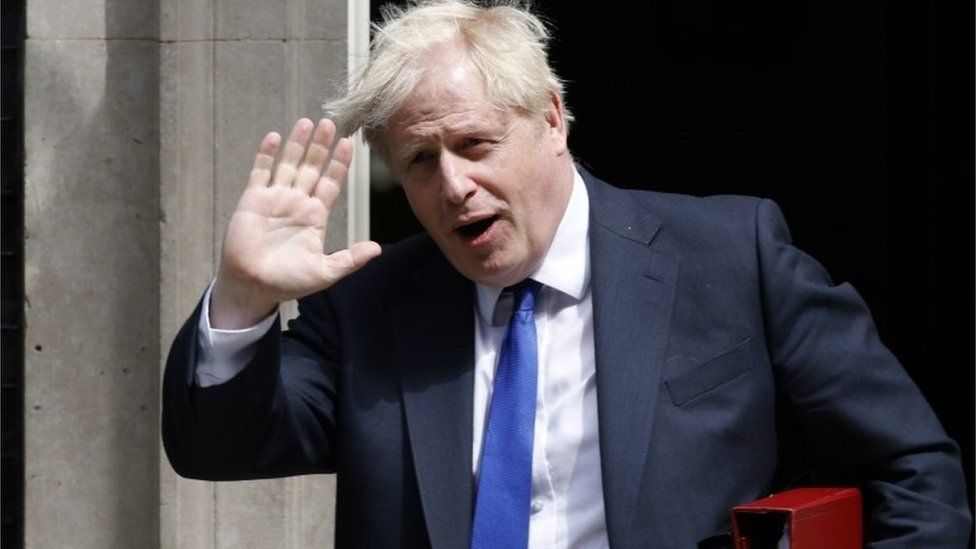 Mr Johnson has so far refused to resign

How the official line changed

The story then became about what Boris Johnson knew about Mr Pincher and when he knew it.

For days ministers and Mr Johnson's spokesman insisted the prime minister was not aware of specific allegations against Mr Pincher when appointing him deputy chief whip.

On Monday night that story collapsed when political correspondent Ione Wells revealed that Mr Johnson had in fact been made aware of a formal complaint about "inappropriate behaviour" by Mr Pincher when he was a Foreign Office minister from 2019-20.

Tuesday saw a dramatic public intervention by the former top Foreign Office civil servant Sir Simon McDonald, who said Mr Johnson had been briefed in person about the complaint.

Downing Street then told journalists that Mr Johnson had in fact known - but had "forgotten".

On Tuesday Mr Johnson admitted it had been a "bad mistake" to appoint Mr Pincher.

But the damage was done.

In his letter Mr Sunak said the public "rightly expect government to be conducted properly, competently and seriously".

In a subsequent statement to Parliament on Wednesday Mr Javid said - with Mr Johnson looking on - that the problem "starts at the top" and "that's not going to change".

Tuesday afternoon saw Mr Johnson call the rest of his cabinet to find out who was staying and who was going - so far the rest of the cabinet has remained loyal.

Will Johnson resign? Or call a general election?

On Wednesday Mr Johnson appeared before MPs in the House of Commons determined to ride out the storm.

Asked by a Conservative MP if there were any circumstances under which he would resign - he replied that he would "hang on in there".

"Frankly, the job of a prime minister in difficult circumstances when you have been handed a colossal mandate is to keep going and that's what I'm going to do," he said, referring to his landslide 2019 general election win.

But the BBC's Chris Mason said you could feel, hear and smell the authority draining away from Boris Johnson and his exit from Parliament was greeted by opposition Labour MPs jeering "bye bye".

The prime minister could also face a second confidence vote as early as next week, after he was told by leading MPs that they would change Conservative party rules to allow it.

Some have questioned whether Mr Johnson could seek to shore up his position by calling an early general election.

However a YouGov poll on Tuesday showed that 69% of British people now thought that Mr Johnson should resign and more than half of Conservative voters also believed he should go.

So a snap general election would also be fraught with risk.