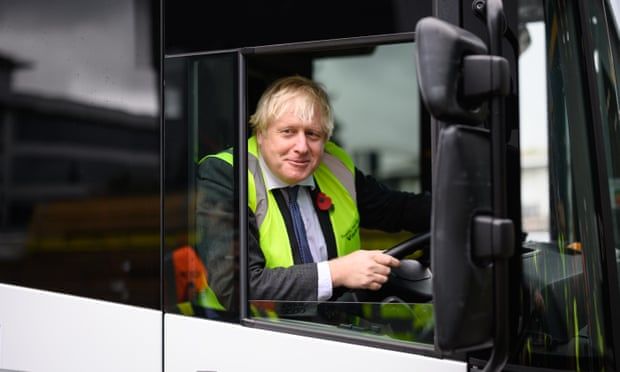 Boris Johnson was hailed as the ‘delivery man’ but are the wheels coming off?

Analysis: anger over rail and social care plays into narrative of a PM overpromising and underdelivering

In the run-up to the Conservative conference, senior Tory sources briefed that it was the moment to relaunch Boris Johnson as the “delivery man” – a prime minister who had pushed through an extraordinary vaccine rollout and would now take the same scale of ambition to his domestic agenda.

But in the weeks that have followed, could the wheels be coming off the delivery van?

Labour have crept ahead in the polls after a fortnight of Tory sleaze headlines that have left MPs annoyed and frustrated as the the prime minister repeatedly discharged bullets into his own foot.

In private, ministers and MPs believe the real test of Johnson’s leadership and of their electoral fortunes lie in two of the other big stories of the week. First is the deep disappointment and, in some cases, cold fury that have greeted the long trailed integrated rail plan that radically scales back on promises to towns and cities across northern England.

The second is an announcement, quietly slipped out overnight, that places a huge additional burden on poorer households for care costs, one to exacerbate the north-south divide when it comes to passing on assets to children.

Both of those stories, if they gain more momentum and if Labour can successfully turn them into a narrative, suggest a prime minister overpromising and underdelivering on two of the most important planks of his domestic agenda. After all, he had promised to level up the country.

“Boris has never had support because people believe in his ideology or think he’s a decent bloke,” one Tory minister said. “It’s because they think he can win and that he can get things done.”

The Conservative chair of the transport committee, Huw Merriman, said it even more bluntly to the transport secretary, Grant Shapps, on Thursday: “This is the danger of selling perpetual sunlight and then leaving it to others to explain the arrival of moonlight.”

The criticism that will sting the most is from Johnson’s own northern MPs. Jake Berry, the chair of the northern Tory caucus, quoting the prime minister’s promise on the third day of his premiership of a new line between Manchester and Leeds, asked Johnson directly whether “voters of the north [were] right to take the PM at his word?”

Robbie Moore, the newly elected Conservative MP for Keighley who holds a slim 2,000 majority over Labour, which had previously gained the seat in 2017, said he was “deeply disappointed” by the slimmed-down announcement. “The Bradford district has been completely short-changed,” he said.

There is an argument to say that delivery, of a different kind, is likely to have been one of the things that persuaded Johnson to accept the scaled-down but sped-up rail plans, though it is clear Rishi Sunak’s Treasury would have had a hand in forcing some of the changes amid wider concern about the costs of HS2.

The changes aim to bring some faster connections a decade earlier than if more ambitious changes had gone ahead. Johnson is gambling that commuters start to feel the difference in time to deliver electoral benefits.

Social care is another area that could see his support crumble from a bulwark of MPs who backed him over the national insurance rise on the proviso that a plan to fix the dire social care crisis was a prize worth capturing.

Many of those MPs also came from non-traditional seats with less well-off voters. Those are the voters likely to be the ones hit by details revealed on Wednesday night that means-tested council funding would not count towards the new cap on care costs. 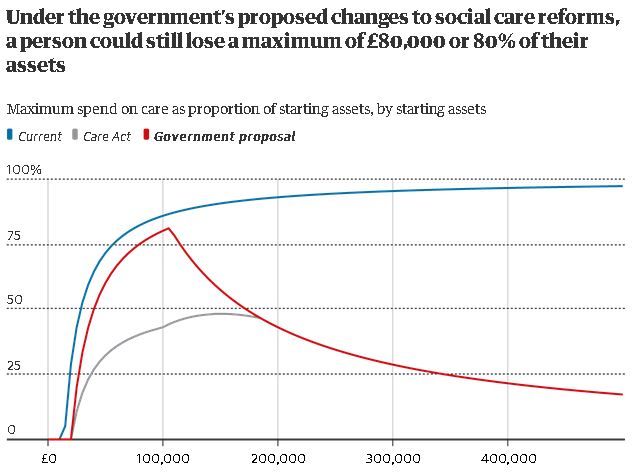 It will effectively mean pensioners in £1m homes in Hertfordshire who do not qualify for early help have the vast majority of their assets protected, but in northern towns such as Workington or Hartlepool, elderly people who qualified for means-tested help could eventually lose up to the entire value of their homes.

There is another big test in the pipeline: the long-awaited levelling up white paper promised by the end of the year, authored by the Tory MP Neil O’Brien. Under Michael Gove at the new levelling up department, DLUHC (which Gove has told officials to pronounce as “deluxe”), the white paper will be the flagship announcement on Johnson’s foremost government priority.

The promise is that the paper will deliver on improving living standards, growing the private sector and increasing and spreading opportunity across the nation, touching almost all aspects of government.

O’Brien has a deep understanding of the issue, as one of the co-founders of the thinktank Onward, which coined the term “Workington Man” for the new kind of voter the Tories should be seeking.

Stakes are high for what the paper will promise to deliver. Johnson’s speech this summer on his vision for levelling up was criticised by experts for containing scant new policy or even any astute analysis. “We know it didn’t land,” one No 10 source said this week.

One minister said this week the PM had talked about wanting to avoid creating another “big society” – the David Cameron slogan that caught public attention – but came to be derided by his own MPs as meaningless. That will hinge on whether he can salvage his social care and infrastructure disappointments – and what this autumn’s white paper can tangibly deliver.