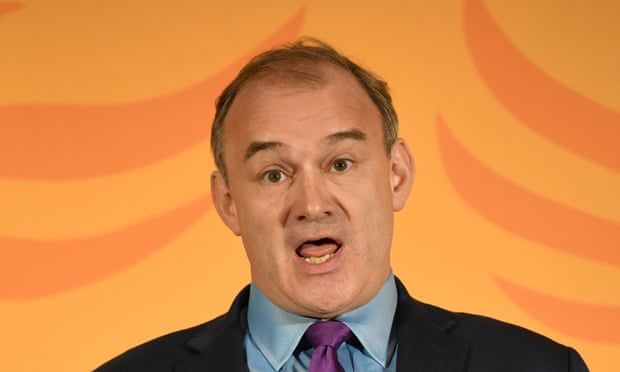 Boris Johnson 'trying to hide' from scrutiny of Covid inquiry

Lib Dem leader says he fears PM will seek to delay inquiry, which he says must have ‘sharpest teeth imaginable’
Boris Johnson is “trying to hide” from a public inquiry into coronavirus, the Lib Dem leader, Ed Davey, has said, adding that he feared the prime minister could seek to delay one for years, or give it limited powers.

Davey is a key figure in the push for an inquiry, now backed by senior doctors, government scientific advisers and an ex-head of the civil service, having first got Johnson to agree to some sort of investigation in parliament last July.

But with Downing Street insisting ever since that the time was still not right to begin the process, and offering no timeline, Davey said he feared bereaved relatives could become a “next generation of Hillsborough families”, endlessly pushing for answers.

“I think Boris Johnson is trying to hide,” Davey told the Guardian. “The real question is, if not now then when? He’s come up with excuse after excuse. But we got to have the bereaved families at the front of our minds.”

Davey questioned the No 10 insistence that it would be premature to think about inquiry amid the battle against the virus, given the prime minister’s insistence that the ongoing vaccination programme means there will be no return to lockdown.

Davey said: “He himself is now saying that the path to unlocking is irreversible. Well, if it’s irreversible, let’s set this up. Let’s give the bereaved some answers. But I’m worried that he will not just delay this for a few more months, but for years. This is a man who doesn’t like the truth. He runs from the truth.”

In July, Johnson committed only to an “independent inquiry”. Davey later wrote to the PM seeking for a commitment to hold it under the 2005 inquiries act, which provides strong powers, for example the ability to compel witnesses to appear.

“Boris Johnson runs from accountability, he hides in fridges, won’t turn up to answer questions from the public,” Davey said. “This has to be an inquiry with the sharpest teeth imaginable.

“This is the biggest catastrophe, the biggest trauma the British nation has suffered since the second world war. It has to be the toughest, most independent inquiry that British law allows, and anything short of that would be totally unacceptable.”

Part of any inquiry would look into the high death toll from Covid in residential care homes. Davey said it should also look at the experiences of unpaid carers, often family members, whose plight, he said, had been “ignored by government”.

At the Lib Dem spring conference, an online event taking place next week, Davey is unveiling plans for a so-called carers’ commission, grouping together politicians and experts with a brief to produce a series of rolling recommendations, on a monthly basis. The first element scrutinised will be the role of young carers.

Davey, who co-cares for his disabled son and has said he wants to be a voice for carers, said he hoped the commission would provide “a drumroll of ideas that I can be challenging the government on”.

He said: “I want this in real time. Carers have been forgotten for too long. We’ll have lots to say about carers at the next election, but I think the government should move now.”

Ideas already pushed for by Lib Dems include an increase of £20 a week in the the carers’ allowance, to match the Covid-related uplift in universal credit, and more options for respite breaks.

On becoming prime minister, Johnson promised a cross-party approach to reforming and reorganising the form adult social care sector, but nothing has since happened. Davey said the Liberal Democrats backed such a plan, but were still waiting for any approach from ministers.

“This government increasingly gives the impression that they are running from all forms of working together, as well as from all forms of accountability,” he said. “The debate on social care must also have a link to these unpaid carers. There are millions of people looking after loved ones, and their role is not properly valued.”
#Covid  #Coronavirus  #Boris Johnson
Add Comment