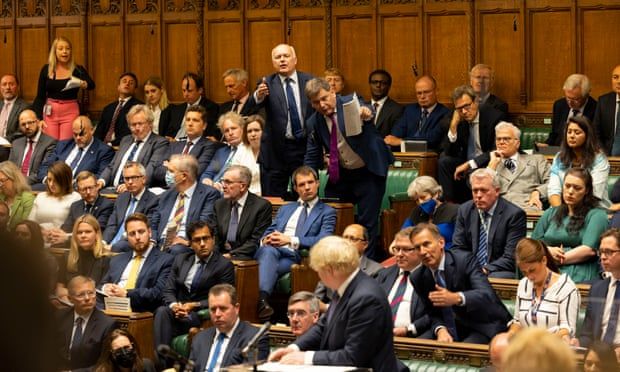 Analysis: PM fails to make convincing defence of foreign policy amid criticism from across the Commons

Other leaders have had the luxury of being able to deliver an uninterrupted televised address. But Boris Johnson had to justify the ignominious retreat from Afghanistan in front of a testy, and at times hostile, House of Commons – dominated by critics from his own side asking if Britain could have been better prepared and if the collapse of the Kabul government could have been averted.

It was an occasion the UK prime minister struggled to rise to, not helped by the format that Downing Street had opted for: a general debate, which meant MPs were allowed to rise and seek to intervene as Johnson spoke, generating a crescendo of background noise after he had completed a line or two.

After two minutes the prime minister was refusing – again – to agree to a public inquiry in response to an intervention from Tobias Ellwood, the chair of the defence select committee, rather than develop his own argument.

“I believe most of the key questions have already been extensively gone into,” he said, setting aside the fundamental misjudgment of the strength of the former Afghan army.

In such circumstances it was difficult to strike a note of remembrance, for the efforts made by the Afghan people and the British military in trying to build a different kind of society following the ousting of the Taliban in 2001. “The sacrifice in Afghanistan is seared into our national consciousness,” he told MPs, but the sentiment was lost in the intensity of the Commons chamber.

An attempt to cite the improvements over the last 20 years – “now 3.6 million girls have been in school this year alone, and women hold over a quarter of the seats in Afghanistan’s parliament” – was similarly greeted with criticism, with Britain’s MPs focused on the crisis of the moment: what could happen next in a country where there is genuine concern for women’s rights and political freedom.

Even the Taliban were surprised by the speed of their takeover, Johnson argued, before switching tack to say that, actually, the outcome had been to some extent foreseen. “It was certainly part of our planning,” the prime minister said, because it had been decided to set up an emergency handling centre at Kabul airport “two weeks ago” – a rather weak argument, and in any event actions insufficient to avert the chaotic scenes of Monday, when people ran in front of and hung on to planes.

But there was no attempt to follow the French president, Emmanuel Macron, who earlier this week emphasised the security threat from a Taliban-led Afghanistan, and who promised a “robust, coordinated and united” response to prevent Afghan migrants heading west.

Johnson instead promised to take 20,000 Afghan refugees and even held out a diplomatic olive branch to Kabul’s new masters: “We will judge this regime based on the choices it makes – and by its actions rather than by its words.”

Nor did he follow Joe Biden, who even blamed Afghans for failing to defend their fragile democracy in his televised speech this week. The prime minister reminded MPs that 69,000 soldiers from the country’s army had “given their lives” over 20 years. He focused on Biden’s decision to pull out, saying: “The west could not continue this US-led mission – a mission conceived and executed in support and defence of America – without American logistics, without US air power and without American might.”

It was an attempt to demonstrate there was, ultimately, no alternative, an argument which might have gone unchallenged for longer had not his predecessor, Theresa May, immediately stood up and asked what attempt Johnson had made “of putting together an alliance of other forces in order to replace American support in Afghanistan” within Nato.

‘Where is global Britain on streets of Kabul?’: Theresa May blasts UK failure in Afghanistan

At first Johnson sought to deflect – he had spoke to Nato’s chief “only the other day” – before he cut to the essential point: “I do not believe that today deploying tens of thousands of British troops to fight the Taliban is an option that, no matter how sincerely people may advocate it – and I appreciate their sincerity – would commend itself either to the British people or to this house.” Just like Biden, Johnson’s argument was that, in reality, the UK has no desire to commit to an endless fight.