MPs are set to usher in a historic £12bn healthcare levy on Wednesday, pushing the tax burden to a record peacetime level as Boris Johnson stakes his political reputation on attempting to fix the creaking health and care systems.

Setting out the radical plan for a carved-out healthcare tax, Johnson willingly conceded that the 1.25 percentage point increase in national insurance contributions (NICs) – to be rebadged a health and social care levy – would break an explicit manifesto promise.

But Downing Street is gambling that presenting the plan as a response to the Covid pandemic, with emphasis on tackling the NHS backlog, will convince voters it is necessary.

“I’ll be absolutely frank with you – this levy will break our manifesto commitment. But a global pandemic wasn’t in our manifesto either,” Johnson said. He declined to rule out further tax increases later in the parliament.

Under the proposals, patients entering the social care system from October 2023 will not have to pay more than £86,000 over their lifetime. More means-tested support will also be provided for those with assets of between £20,000 and £100,000.

Keir Starmer, the Labour leader, attacked the proposals as “a sticking plaster over a gaping wound”, saying the revenue raised was too little to solve longstanding challenges in the NHS and social care, and a NICs increase was unfair on working families. But the prime minister taunted Labour for not putting forward its own proposals, saying that a “plan beats no plan”.

Paul Johnson, director of the Institute for Fiscal Studies thinktank, said the move would mean “taxes will reach their highest sustained level in the UK” in the coming years – underlining the extent to which the current government has ditched the Tories’ traditional role as the party of low taxes and a small state. He added that creating a new levy, instead of increasing income tax, “will mean yet more quite unnecessary complexity”.

The free-market Adam Smith Institute condemned the plans as “morally bankrupt”, saying the government was asking “poorer workers to bail out millionaire property owners”. It condemned the plan as “a kick in the teeth for all the young working people of this country who have already been hard done by the pandemic”.

Meanwhile, social care providers and charities warned that the extra resources would not be sufficient to improve standards for the more than a million adults receiving social care.

Richard Kramer, chief executive of disability charity Sense, said: “We welcome the immediate investment into social care but we don’t have confidence that this is the long-term, sustainable and sufficient funding plan that was promised.

“Will the money really find its way back into social care after 2025? We need a commitment from government that this money will be ringfenced, or we will never find our way out of this crisis.”

Less than one in every six pounds of the money raised will go to social care in the first three years of the plan. The health and social care secretary, Sajid Javid, declined to say what proportion would go to the NHS after that, saying it depended on “a lot of assumptions” about the future impact of Covid and the scale of missed NHS treatments.

“I don’t want to say after three years it will be exactly this split,” he said. “What we do know is we’re going to be certainly able to deal with a huge amount of the backlog over the next three years, and more, proportionally, of the levy will go to adult social care.”

Javid also refused to say whether the NHS backlog would be cleared in this period, saying: “We’re going to try and tackle as much of the backlog as we can.” He added that without the extra resources, NHS waiting lists could surge to 13 million. 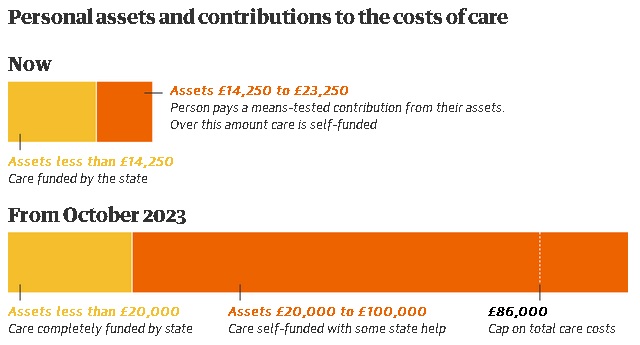 The £14bn-a-year package of tax increases is expected to raise £36bn over the next three years, once the costs to the government of paying the higher NICs rate for its own employees is taken into account.

In an effort to avoid the charge that the burden is falling unfairly on younger voters, the government also announced that from 2023-24 workers over the state pension age would pay the new levy.

Dividend tax will also be increased by 1.25 percentage points to avoid the charge that company owners who pay themselves through dividends will be able to dodge the new levy.

In a historic shift, the chancellor announced that as of 2023-24 the revenue from the tax increase will be hypothecated – allocated by law – to pay for health and social care. It will appear as a separate line on workers’ payslips.

Conservative MPs are widely expected to support the proposals when they vote on Wednesday, though many are privately irked by the speed with which they have been rushed through and the chaotic leaks of recent days. Labour will vote against the plan.

After months of tense negotiations between Johnson, Javid and the chancellor, Rishi Sunak, the cabinet were only shown the details of the plan on Tuesday morning, when they were presented with a printed document at their first in-person meeting since last year.

Sceptical cabinet ministers appeared to have been won over by tweaks to the proposals – including the new levies on working pensioners and dividends – as well as the threat of an imminent reshuffle.

Johnson repeatedly declined the opportunity to rule out reshuffling his top team on Tuesday, though many at Westminster now believe he will wait until after the Cop26 climate summit in November.

Allies of the chancellor have made clear he would not be raising taxes at this point in the economic cycle were it not for the prime minister’s personal promise to tackle social care.

One senior Tory source suggested that while Downing Street had won the immediate battle and would see its proposals waved through on Wednesday, the cumulative impact of a string of unpopular decisions on issues including vaccine passports and aid cuts mean backbench discomfort was growing. “It would be naive to think that there is not going to be a long-term cost to this at some point,” the source said.