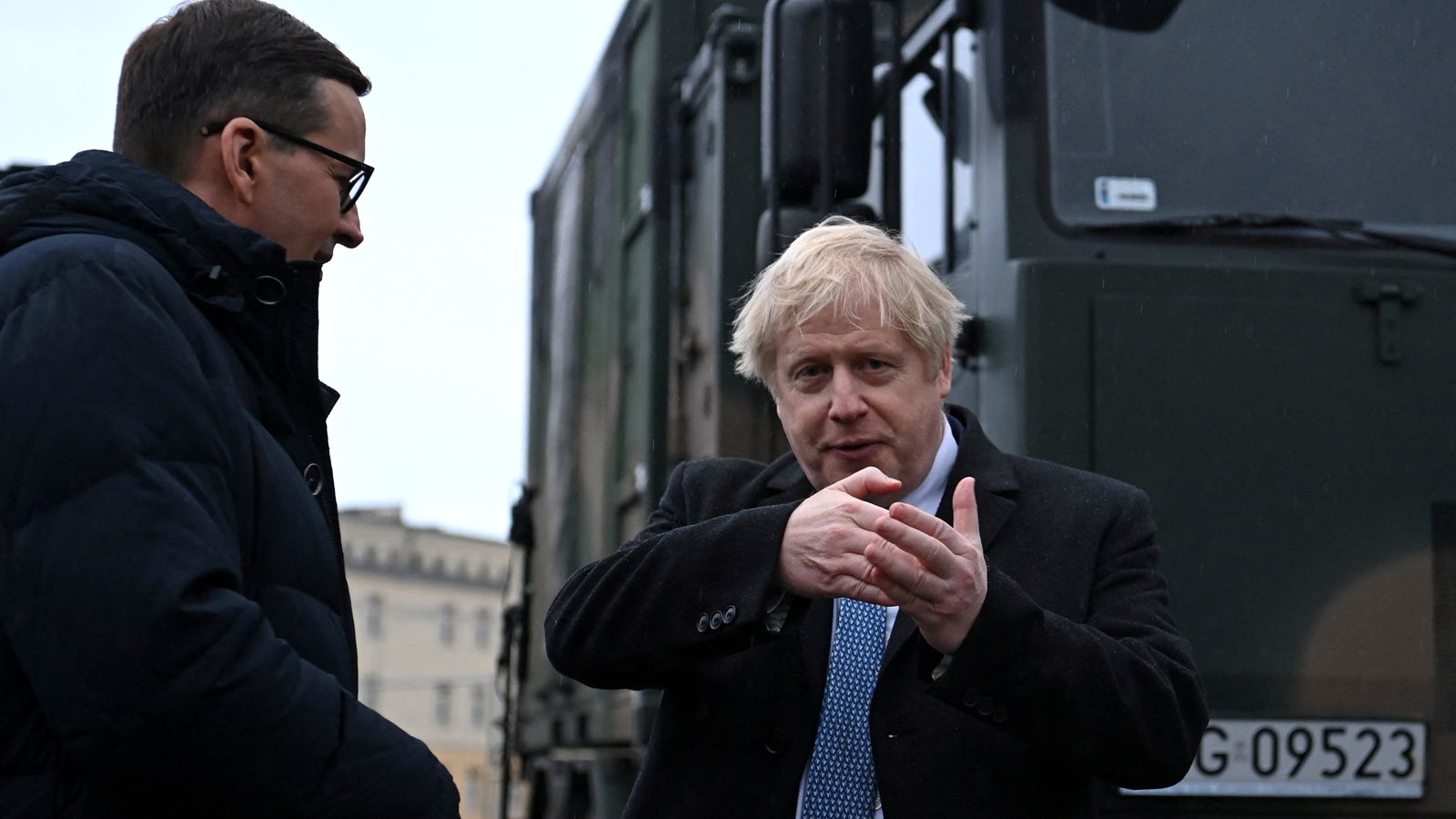 For an embattled Boris Johnson, a meeting with British troops abroad is an easy show of strength and there are domestic sceptics that would argue his dash to Brussels and Warsaw is as much about an attempt to switch the narrative back home than about genuine talks.

London to Brussels to Warsaw and back again all in one day; it was a day of whistle-stop diplomacy as Boris Johnson, flanked by allies, sought to impress upon all of us the "dangerous moment" Europe is facing in the stand-off with Russia over Ukraine.

Besieged at home over the ongoing police investigation into alleged parties in Downing Street during lockdown (which we will come back to), the prime minister wanted to change the debate.

To move away from his domestic difficulties to the deepening crisis in Ukraine, as Russia and Belarus began 10 days of military drills on its border.

But, when I asked the prime minister if, after weeks of apparently fruitless diplomatic effort, he had come to the conclusion that Russian President Vladimir Putin wanted this war, he said: "I honestly don't think a decision has yet been taken.

"But that doesn't mean that it is impossible that something absolutely disastrous could happen very soon indeed.

"This is probably the most dangerous moment in the course of the next few days in what is the biggest security crisis faced in Europe in decades."

Mr Stoltenberg reiterated NATO's willingness to "listen to Russia's concerns" as he too spoke of the "dangerous moment" Europe faced.

"The number of Russian forces is going up," he added. "The warning time for a possible attack is going down."

Both men also sent a clear message to President Putin that NATO will not compromise on core principles - the right of each nation to choose its own path and NATO's ability to protect and defend its allies.

If the NATO headquarters in Brussels is where leaders and tacticians try to game out, and try to avert, armed conflict, it was the prime minister's next stop - Warsaw in Poland, which borders both Belarus and Ukraine - where the pressure is being felt on the ground.

Mr Johnson came here to meet with Polish Prime Minister Mateusz Morawiecki and President Andrzej Duda, as well as visit British troops who only on Thursday had been deployed to Warsaw as part of a NATO mission to provide humanitarian assistance in the event of a Russian invasion into Ukraine.

The 350 British troops deployed to Poland - with another 650 put on standby - is a drop in the ocean compared to the more than 100,000 Russian troops building up on the Ukraine border.

But Mr Johnson pointed out, when visiting a Polish military base, that the Ukrainian army numbers about 200,000 troops.

"The Ukrainian army will fight and there will be bloodshed," he said.

Meanwhile, Russia began massive military drills in the Black Sea on Thursday with an estimated 30,000 Russian troops, supported by tanks and aircraft, in so-called "Allied Resolve" exercises in Belarus.

Of course, for an embattled Mr Johnson, a meeting with British troops abroad is an easy show of strength and there are domestic sceptics that would argue his dash to Brussels and Warsaw is as much about an attempt to switch the narrative back home than about genuine talks.

Indeed, when repeatedly asked about 50 members of staff being quizzed by the Met Police over Downing Street parties and whether he might have to resign should he be fined for breaking rules, the prime minister kept ducking those questions as he pivoted back to the issues around Ukraine.

The only moment on Thursday he engaged with developments in London was when I asked him about Sir John Major's remarks that his troubles at home had left the UK's reputation abroad "shredded".

But what is true is that the Ukrainian crisis is deepening by the day and it leaves the UK and its biggest allies with the deepest difficulty they have faced in Europe for decades.

This then is exactly the moment that the UK needs stable government. It has a prime minister that, despite his overseas engagement, is not placed to do it. He faces too many problems at home.