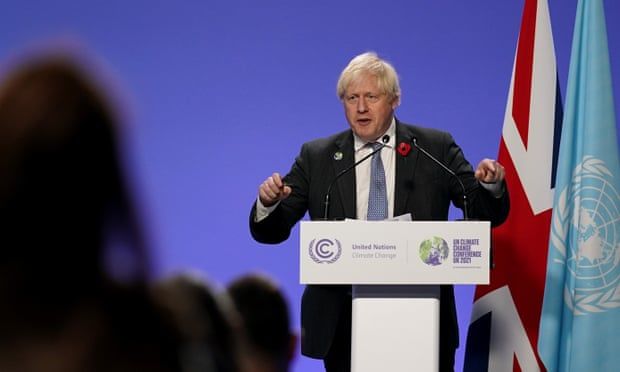 Boris Johnson says the UK is not ‘remotely a corrupt country’. Is it?

Analysis: the reality looks different as the PM defends his government’s reputation over allegations of sleaze

At a press conference on Wednesday, Boris Johnson faced such a barrage of questions about ethical standards in politics that he felt obliged to argue that the UK “is not remotely a corrupt country”.

This was an unusual step for a British prime minister to take, and begged the question: well, is it?

Johnson’s government has faced numerous claims connected to corruption, vested interests and wider misgovernment. Below are some of the main concerns.

Trying to save a Conservative MP from punishment

The catalyst for the current row was Johnson’s decision to try to retrospectively change the system for disciplining MPs so as to avoid punishment for Owen Paterson, a Tory former minister found by the commissioner for standards and by a cross-party committee to have committed an “egregious” breach of lobbying rules.

The Commons amendment which quashed any sanction against Paterson was formally in the name of another backbencher, Andrea Leadsom, and was couched in terms of reforming the wider standards system, but the motivation came from No 10, while the use of Paterson’s case and the proposal to create a new standards committee with a built-in Tory majority prompted outrage. Johnson U-turned the next day.

Paterson’s lobbying was done on behalf of companies who together paid him well over £100,000 a year. His case brought a fresh examination of the scale of such outside work, mainly done by Tory MPs.

A Guardian analysis found more than a quarter of Conservative MPs had second jobs, making more than £4m in extra earnings in a year. Some of this has involved worries over potential conflicts of interest, such as former Tory leader Iain Duncan Smith, who was paid to advise a hand sanitiser company while he chaired a government taskforce that recommended new rules benefiting the firm

The greatest focus has been on Sir Geoffrey Cox, the former attorney general, who has held down the job of being an MP while earning at least £6m extra as a barrister, including a stint working in the British Virgin Islands during lockdown, and using his Commons office for at least one virtual meeting. Cox has denied breaking any rules.

Peerages ‘for sale’ or for cronies

At the weekend, an investigation showed 16 of the Tories’ main treasurers in the last 20 years, who made donations to the party of £3m or above, had been made peers.

Johnson has previously been accused of overt nepotism in his choice of peers, with those chosen including Tory donor Peter Cruddas, in defiance of official advice, his friend Evgeny Lebedev, a string of former colleagues, and his own brother, Jo.

Murky standards by Johnson himself

The PM was criticised earlier this year for some opacity over revealing details about a luxury villa stay in Mustique funded by a Tory donor. He has since refused to disclose the cost of another donated holiday, this one to Spain.

Most confusing is who paid for renovations to Johnson’s Downing Street flat, which reportedly cost as much as £200,000. Although Johnson eventually met all costs above the £30,000 public allowance himself, some bills were initially met by the Cabinet Office and by Tory peer and donor, Lord Brownlow.

The independent adviser on ministers’ interests, Lord Christopher Geidt, said Johnson had “unwisely” let the refurbishment begin without knowing how it would be paid for, while the Electoral Commission began an investigation after saying there were “reasonable grounds” to suspect offences may have been committed. Finally, the parliamentary commissioner for standards, Kathryn Stone, could also investigate the matter.

Seeking to undermine the commissioner for standards

After Paterson’s punishment was briefly overturned, one of Johnson’s most senior ministers, business secretary Kwasi Kwarteng, suggested Stone should step down, despite her independent status.

Since then, Downing Street has twice argued that Stone should not examine two standards issues connected personally to Johnson – who paid for the flat renovations; and the cost of the free holiday in Spain, provided by one of his ministers, Zac Goldsmith.

While No 10 said these were purely ministerial issues, and thus not within her remit of scrutinising MPs’ behaviour, it raised concerns Johnson and his team were seeking to limit Stone’s powers.

The government’s new elections bill would, critics say, greatly reduce the powers of the Electoral Commission, the elections watchdog.

Johnson is also seemingly intent on making a key ally, former Daily Mail editor Paul Dacre, chair of the broadcasting and telecoms watchdog Ofcom. After Dacre was turned down for the role, ministers reopened the process with a change to the job description, intended to give him a better chance.

In November 2020, Geidt’s predecessor as adviser on ministers’ interests, Alex Allan, quit in the wake of Johnson’s refusal to sack Priti Patel despite a formal investigation finding evidence that the home secretary had bullied civil servants.

There are wider allegations that the government is trying to ensure that only its supporters are appointed to roles in other bodies, such as the Charity Commission.

Last year there was widespread criticism after the government conceded it planned to break international law by unilaterally amending post-Brexit provisions for Northern Ireland.

More widely, there have been accusations that Johnson signed up to the Northern Ireland protocol in bad faith. Last month, Johnson’s former chief adviser, Dominic Cummings, claimed the UK government always intended to “ditch” the protocol and only signed it to help win the 2019 election.