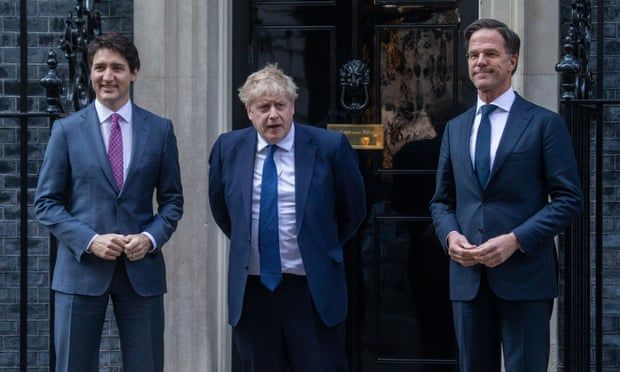 PM’s plan – already all but forgotten – resembled a toddler coming up with a few ideas at school assembly
Over the weekend, we were told that Boris Johnson had a six-point plan with which he would lead the west to victory over Russia in Ukraine. However, on closer inspection – and on contact with reality – that plan didn’t seem to amount to much more than you would expect from a toddler who had been asked to come up with something for a primary school assembly to help other children understand the war. Or something that Gavin Williamson – make that Sir Gavin – might have dreamed up.

And that was it. Just six vague principles, on which anyone could more or less agree, and no metrics by which to measure their success. Certainly nothing by which The Suspect could claim to be leading the world’s response to the Russian invasion. Then again, no one outside the UK is claiming that anyway. And even then, it’s only a small number of people inside No 10 and the Boris-friendly media who see Ukraine as a chance to reboot his premiership. To make him look impressive on the world stage and to make the country forget he is unfit for office.

Certainly, the six-point plan appeared to be all but forgotten as Johnson gave a joint press conference with Justin Trudeau, the prime minister of Canada, and Mark Rutte, the prime minister of the Netherlands. As was any sense of the UK leading a western coalition against Russia. If Trudeau and Rutte were in any sense taking their cue from Johnson, it was news to them. Rather, this was, as far as they were concerned, a meeting of equals. Of three leaders fumbling in the dark as they tried to impose rational solutions on an increasingly irrational Russia.

Nor did The Suspect choose to bring up the six-point plan that he had briefed so heavily over the past couple of days in his opening remarks. Probably for the best. In hindsight, even he must see that it’s all a bit feeble. Instead Johnson stuck to garbled generalities and platitudes. The international community was almost unanimous in its condemnation and must move together. Putin had underestimated the west and must surely fail. And in the meantime, the UK would be giving Ukraine an extra £175m in humanitarian aid.

Trudeau and Rutte said much the same, though in fewer words. Mercifully. Though Trudeau did twice mention something about the importance of middle-class jobs in the ongoing crisis, before going on to say that Canada would be imposing sanctions on 10 new individuals. This clearly startled Johnson. He sincerely hoped that the new people being targeted were not personal friends of his or philanthropists who had donated money to the Tory party.

Most of the questions focused on the dependence of the west on Russian oil and gas. The three amigos more or less stuck to the same script. Reducing dependence was a good idea, but not every country could move at the same speed. Obviously, no one was going to start an energy crisis in their own country just to help Ukraine. I mean, come on, everyone, get real. Johnson merely added that he was open to abandoning his commitment to net zero and that increasing North Sea oil production and starting fracking were not off the cards. Though he didn’t seem to be aware that this might not solve the UK’s problems as the oil and gas were likely to be sold abroad.

Things got trickier for The Suspect when he was asked about refugee visas and sanctions. On visas, he merely said that the UK wanted to be as generous as possible. Unfortunately, that turned out to be not very generous at all. After all, we had taken loads of Afghan refugees and now the UK was technically full. It was just Ukraine’s bad luck. But hopefully the Poles could help out.

On sanctions, the UK was again going the extra mile. It was completely normal for the son of a KGB agent who had done bugger all for the UK to be granted a peerage after the personal intervention of the prime minister. In any case, it wasn’t as if Evgeny Lebedev ever went to the Lords. Or spoke. Or voted. He was a complete waste of space. He just liked to swan around while flunkeys called him “Lordski”. So, no harm done. He was hardly involved in UK politics at all.

And as for the really bad oligarchs – as opposed to the pretend baddie oligarchs – The Suspect had them in his sights. Any that hadn’t been of use to the Conservatives would now find that they had to declare their beneficial interests in assets within six months rather than 18 months. However awfully inconvenient for them this might be. Somehow Trudeau and Rutte managed to keep a straight face.

It was all rather low-key, as if it had only just dawned on everyone there were no quick fixes on offer. Two weeks ago, Johnson had seen Ukraine’s tragedy as an easy shot at personal redemption. Now he was beginning to realise there were strings attached. Tricky choices that would leave him further compromised. Decisions that would cost lives. And personal responsibility isn’t The Suspect’s strongest suit.

Nor that of his colleagues. In front of the foreign affairs select committee, the foreign secretary, Liz Truss, was putting all the blame for the failure to take more than a handful of refugees on the Home Office. Nothing to do with her, guv. While in the Commons, Priti Patel was insisting that the Home Office figures of just 50 refugees allowed in were nothing to do with the Home Office. And that visa staff were in Calais when they weren’t. Apart from those on holiday. Then Priti Vacant at least has an excuse. She’s not just vicious, she’s stupid.

Meanwhile, Ukraine burns and its citizens fight on alone. Just imagine their despair if they ever get wind of Johnson’s six-point plan.
#Boris Johnson  #Priti Patel  #Johnson
Add Comment