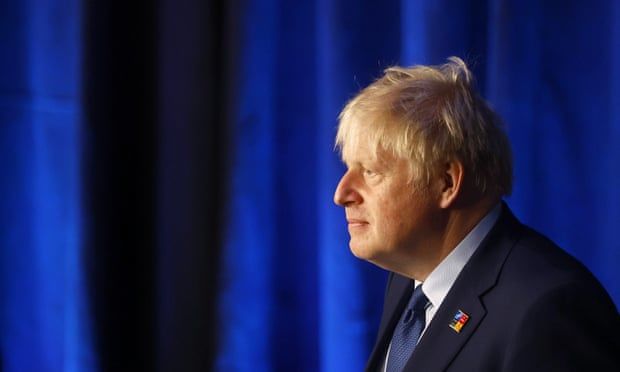 Listen to the article
0:00 / 0:00
Voice by MediaWorks
Embattled prime minister embraces a desire to keep quiet on matters of electability after being branded delusional for longevity boast
It began last Sunday when Boris Johnson, newly arrived at the G7 summit in southern Germany, told ITV that his “golden rule” for politics – one not seemingly aired before – was that politicians should not talk about themselves, just their policies.

The next day, talking to BBC News, the prime minister similarly dismissed all questions about domestic political troubles, including a double byelection loss and new rumblings of discontent among Tory MPs.

“The job of the government is to get on with governing, and to resist the blandishments of the media, no matter how brilliant, to talk about politics, to talk about ourselves,” he said.

A narrative had been set. In interview after interview, whether TV clips or more informal questioning by reporters travelling with the PM, Johnson insisted it was simply not his business to delve into such matters.

“I am no longer a member of that sacred guild,” he said, referring to his former life as a journalist. “It would be a demarcation dispute for me to cross over and talk about politics. I’ve got to talk about our programme for the government.”

By the end of the trip this insistence was raising eyebrows. A final TV interview with GB News saw Johnson repeatedly questioned about how he could deliver policy without addressing very serious questions about his authority and if voters trusted him. Again, it was rebuffed.

What is going on? The short answer appears to be that Johnson, who has just completed a marathon, nine-day overseas visit, beginning with a Commonwealth summit in Rwanda, was somewhat burned on the opening leg and decided on what could be described as a bunker mentality.

Asked about his political woes before leaving Kigali, Johnson launched into one of his trademark extemporised answers, which ended with him mulling over the idea of winning three elections and staying in power into the 2030s.

For any prime minister this would be bold. For one who had just lost two Commons seats and had 41% of his MPs vote for him to be ousted it was, critics said, “delusional”.

And so the media shutters came down. While he was effusive and colourful at the G7 and Nato, undertaking TV interviews every day, an on-plane chat with the travelling media and a closing press conference in order to explain efforts to rally international support for Ukraine – he steadfastly refused to address any party-political or personal matters.

It is understood the policy was personally decided on by the prime minister rather than by his media team. It arguably brought at least temporary dividends – at his end-of-Nato press conference, just about every question was on policy.

It is, however, one thing to do all this at an international summit devoted to the fate of Ukraine. Back in the UK, things are likely to get more tricky.

On Wednesday Johnson appears before the liaison committee, made up of the MPs who chair subject-specific select committees, where he will face close questioning on more than just the nuts and bolts of policy.

Similarly, renewed moves by Tory MPs to remove the prime minister will not go away simply because he would prefer to not talk about them. The 1922 Committee of backbench Conservatives is about to elect a new executive, which could be crucial in deciding whether another challenge emerges or not.

It is worth noting that while Johnson has been silent on the issue, those around him are not. One source close to the PM predicted during the trip that the committee would never change its rules allowing more regular attempts to oust leaders, saying that if it happened “leaders for ever more would have a gun to their head”.

Other sources were openly critical about criticism of Johnson from former Tory leaders, including William Hague and Michael Howard, briefing that neither of them managed to win an election.

But one thing seems clear. At the moment, Johnson appears to relish his role as international cheerleader-in-chief for the Ukrainian cause, where the issues are simple and he receives regular praise. Whether or not his ostrich-like approach helped with domestic political worries, at the very least it gave him a few days to simply not think about them. For a prime minister as embattled as Johnson, that would be welcome.
#Boris Johnson  #Johnson
Add Comment