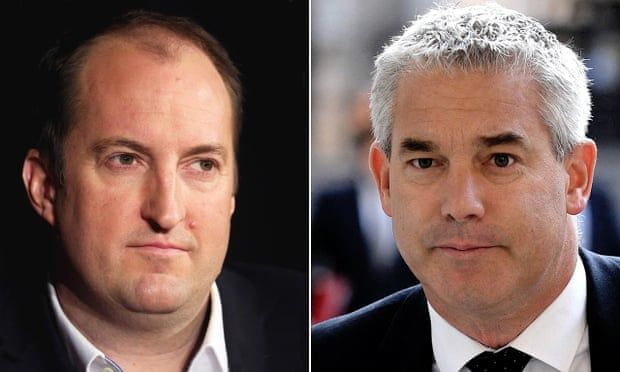 Steve Barclay, the chief of staff, has a cabinet post while Guto Harri, director of communications, has called his boss ‘hugely divisive’
Boris Johnson’s dwindling inner circle greeted his double appointment last night of Steve Barclay as the new chief of staff and Guto Harri as director of communications at No 10 as proof that the prime minister was a man of his word – and one who acted fast.

Conor Burns, one of Johnson’s cheerleaders, tweeted: “He is delivering. @SteveBarclay is a talented and serious Minister and @Guto_Harri is a professional operator. Both great appointments.”

But elsewhere the appointments – made necessary by the resignation of five Johnson aides last week – caused almost universal bafflement.

Barclay is MP for North East Cambridgeshire and also sits in the cabinet as chancellor of the Duchy of Lancaster. He will now be chief of staff and “in charge of integrating the new Office of the Prime Minister and the Cabinet Office, driving the government’s agenda more efficiently and ensuring it is better aligned with the cabinet and backbenchers”.

Jonathan Powell, who served as Tony Blair’s chief of staff, said the appointment appeared desperate, and he was amazed it had been approved by the cabinet secretary, Simon Case. “Steve Barclay MP as chief of staff?” Powell wrote on Twitter. “Does he resign as an MP? Or is he answerable to parliament? I can think of no democracy where the chief of staff can also be in the legislature.

“I found being No 10 chief of staff a full time job. Not sure how it could be combined with representing a constituency. And having to go to answer parliamentary questions about the PM would be tricky. Who pays his salary – does it count against the ministerial salaries limit? Amazed that the cabinet secretary has agreed to this. It all seems a bit desperate.”

The return of Harri to Johnson’s side as director of communications – he served in the role for four years during Johnson’s time as mayor of London – was met with even more disbelief given Harri has hardly been his most vocal supporter recently. In 2018 Harri said Johnson would be “hugely divisive” as prime minister, a remark that has proved prescient.

Dominic Cummings, Johnson’s former adviser, wasted no time before he too was on Twitter saying: “So our new boss is a pro-Remain lobbyist who’s said the PM is ‘sexually incontinent’, ‘hugely divisive’, ‘destructive’, ‘dragging the country down’, & picked ‘wrong side’ in referendum’ GREAT.”

Labour’s deputy leader, Angela Rayner, was also scathing. “Boris Johnson is panicking as he frantically rearranges deckchairs. The prime minister has clearly run out of serious people willing to serve under his chaotic and incompetent leadership so now expects a cabinet minister to be his chief of staff,” she said.

“This is a farce. Being No 10 chief of staff is a 24/7 job so if Steve Barclay is taking it as his third job then Tory MPs and the public can have no confidence that the dysfunction in Downing Street will come to an end. Steve Barclay’s constituents and the public deserve more respect. So much for Boris Johnson’s promise to get a grip. Instead this is just a further collapse into chaos.”

Johnson said the new appointments would help drive his government forward, adding: “I promised change, so that we can get on with the job the British public elected us to do. We need to continue our recovery from the pandemic, help hundreds of thousands more people into work, and deliver our ambitious agenda to level up the entire country, improving people’s opportunities regardless of where they’re from.

“The changes I’m announcing to my senior team today will improve how No 10 operates, strengthen the role of my cabinet and backbench colleagues, and accelerate our defining mission to level up the country.”
#Boris Johnson  #Johnson
Add Comment