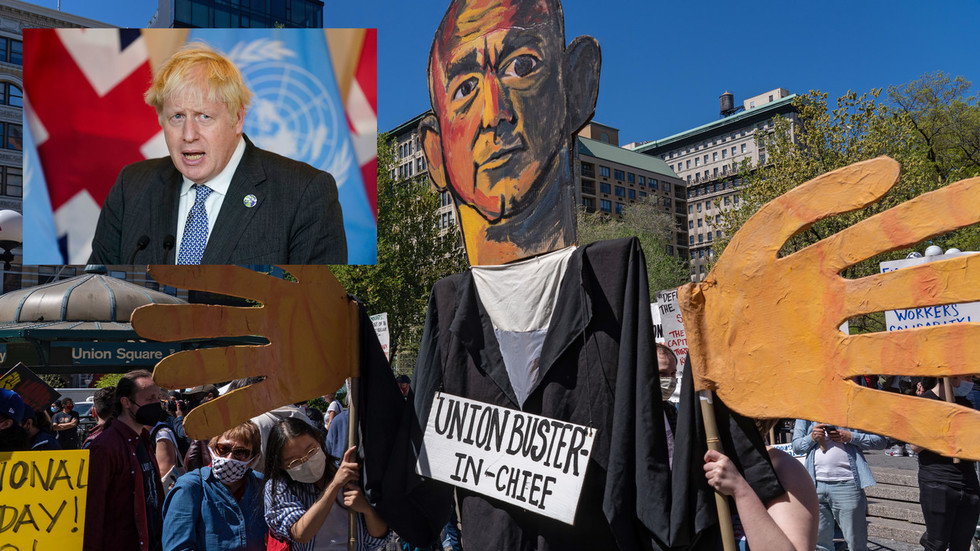 UK Prime Minister Boris Johnson has attempted to confront Amazon founder and world’s richest man Jeff Bezos over his company’s minimal tax payments in the country during the UN General Assembly, Downing Street has confirmed.
The British leader met with Bezos and his girlfriend Lauren Sanchez in the UK diplomatic residence on Monday, discussing a range of topics including – but not limited to – Amazon’s extensive record of avoiding paying its fair share in taxes. While Bezos recently stepped down from his long-time post as CEO of the megacorporation, he remains a director on its board.

“The prime minister raised the issue of taxation, and hoped progress could be in implementing the G7 agreement on tax,” a Downing Street spokesperson confirmed to Yahoo News UK. The group also reportedly discussed Amazon’s less-than-stellar record on workers’ rights, as well as a recent pledge by Bezos to contribute $1 billion in the vague direction of “environmental conservation.”

For his part, Bezos described the conversation with the UK PM as “useful and enjoyable,” suggesting the erstwhile Amazon CEO came out ahead. A legal loophole allows Amazon to shift UK profits to tax havens like Luxembourg, even though for their reported numbers to all work out it would mean the company was somehow generating €62 million per Luxembourg employee – an absurd calculation on its face.

The G7 recently agreed on a global minimum corporate tax rate of at least 15%, hoping to make a dent in the pandemic of tax avoidance that multinationals have engaged in for so many decades, leaving their host countries’ poorer inhabitants to pick up the slack through austerity budgets and other misplaced punishments. The proposed plan would also require that at least 20% of large multinationals’ global profits are brought back to the countries in which they operate and taxed there, rather than in notorious tax havens like Luxembourg or the Canary Islands.

A recent analysis by union Unite examined 19 of Amazon’s UK-registered businesses, along with information publicly released by the company, and found that while it had declared £13.7 billion in UK sales in 2019 in its US accounts, in its UK filings it only admitted to £5.5 billion in sales for that same year, apparently having shifted billions in declared revenues to Luxembourg, the tiny country notorious for being used as a tax haven for the wealthy.

Co-founder of the Balanced Economy Project Nicholas Shaxson slammed the retail behemoth for using such infamous tax-dodging tactics to avoid paying its fair share, calling out Bezos’ firm for its “shenanigans in Luxembourg” and describing those activities as a “classic example of how our markets and tax systems have become corrupted” to the Independent newspaper last month. He noted that monopolies and tax havens are a natural partnership, since they “involve a mindset of antisocial behavior.”

Johnson’s official spokesman had previously reassured reporters that the PM would “raise this important issue” with Bezos during the General Assembly in New York. “We have been an advocate for an international solution to the tax challenges posed by digitalisation of the economy,” the spokesman insisted, noting Johnson would “very much be looking to raising that” with the e-tailing giant.

While the UN General Assembly is ongoing, it’s not clear if Johnson plans to meet again with Bezos to further discuss the tax issue, and no resolution to the problem has been announced. Amazon is also a favored target of US corporate-tax reformers due to its having skated paying less than half the corporate tax rate despite a year of record income in 2020. According to calculations by the Institute on Taxation and Economic Policy, the company avoided paying $2.3 billion in federal income taxes last year on a pre-tax income of $24 billion, itself a 73% increase from the previous year's income. The Covid-19 pandemic forced millions of people to alter their shopping habits to primarily online buying, creating an artificial need which Amazon has been only too happy to meet.
#Boris Johnson  #COVID-19  #Johnson  #Covid
Add Comment