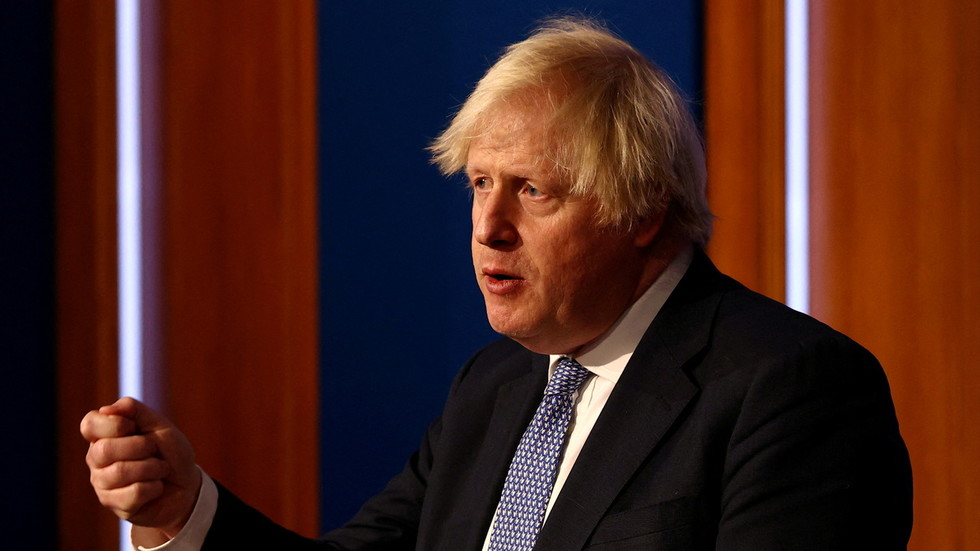 Amid an ongoing scandal over a Christmas party in Downing Street, British Prime Minister Boris Johnson is once again under fire for apparently hosting another festive event days beforehand.
A photo published by The Mirror on Saturday shows Johnson apparently reading out questions to staff at a Christmas quiz in Downing Street on December 15, 2020. Johnson is flanked on either side by aides wearing tinsel and a Santa hat.

Although the quiz was supposedly a virtual one, in which staff answered questions from their computers, an unnamed source told The Mirror that “many staff huddled by computers, conferring on questions and knocking back fizz, wine and beer from a local Tesco Metro.”

At the time, Londoners were forbidden from mixing with others from outside their household, and government guidance advised against Christmas parties in most cases.

Johnson’s office downplayed the party, telling the newspaper that “this was a virtual quiz,” and that “Downing Street staff were often required to be in the office to work on the pandemic response so those who were in the office for work may have attended virtually from their desks.”

Johnson has already seen his approval ratings plummet and his spokeswoman resign over revelations that Downing Street staffers held a party there on December 18, days after the quiz. The lockdown-defying party is one of several events currently being investigated by Cabinet Secretary Simon Case, and former chief of staff Dominic Cummings claimed on Friday that there are more parties yet to be revealed, and “there’s lots of pictures of the parties which will inevitably get out.”

Case is also investigating a leaving party at Number 10 on November 27, 2020, and a party in the Education Department on December 10, although media reports suggest that other events took place at Johnson’s flat, the Treasury, and Johnson’s own residence.

The Labour Party has hammered Johnson for his apparent disregard for his government’s own coronavirus restrictions. “Despite repeated denials of parties in Number 10, it now transpires that there were numerous parties, gatherings and the prime minister even took part in a festive quiz,” Labour Deputy Leader Angela Rayner said.

“Boris Johnson really believes it’s one rule for him, another for everyone else. He is a man unfit to lead this country.”
#Boris Johnson  #Coronavirus  #Johnson
Add Comment