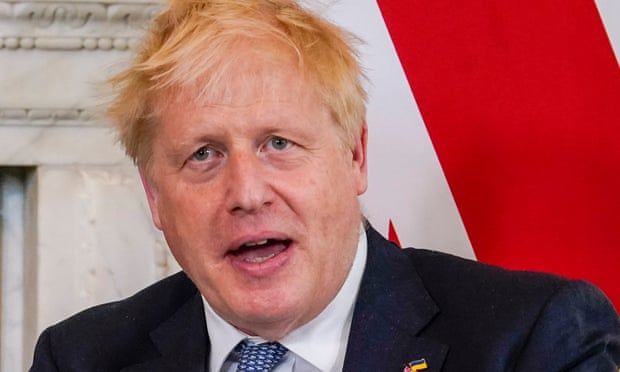 PM says his removal is the one route to a Labour victory, and party must ‘refuse to dance to tune of the media’
Boris Johnson has made a last-ditch plea for support in a confidence vote on Monday evening, telling his MPs that to unseat him would be to “dance to the tune of the media” and plunge the Conservatives into a civil war.

Pledging to lead the party into another election, the prime minister told a meeting of the 1922 Committee of backbench Tories that his removal was the one route to a Labour election victory.

“The only way we can let that happen is if we were so foolish as to descend into some pointless, fratricidal debate about the future of the party, when frankly there is no alternative vision that I am hearing,” he said, according to No 10 aides.

Johnson made a vague promise of future tax cuts, saying that he and the chancellor, Rishi Sunak – who arrived at the committee room with the prime minister – would make a speech on the economy next week.

“Instead of getting into some hellish, Groundhog Day debate about the merits of belonging to the single market, relitigating questions that we settled two and a half years ago, we can get on, we can deliver and we can unite.”

Johnson reminded MPs that the Tories’ biggest electoral win for 40 years was under his leadership, aides said.

It later emerged that Johnson, when asked if he regretted attending leaving drinks at No 10 during lockdown, replied: “I’d do it again.”

The consistent Downing Street view has been that given the prime minister was not fined for attending such events, as his presence was deemed necessary for work, he did nothing wrong in attending them. His one fine was connected to a separate event – his own birthday party.

Of five questions from MPs, two were hostile, including one from the former chief whip Mark Harper.

While allies said the speech was a serious attempt to move on from the months-long row over lockdown-breaking parties in No 10, a senior Tory source briefing in Johnson’s defence afterwards sought to play down the events.

The speech took place two hours before Tory MPs started votinge in a secret ballot on Johnson’s future, called on Monday morning after it was announced that more than 54 Tories – 15% of the parliamentary party – had submitted no-confidence letters.

The result is expected at about 9pm on Monday. Johnson will remain in office if 180 MPs – 50% of the total, plus one – back him. However, should significantly more than 100 vote against Johnson, it could place his political future in jeopardy.

In a clearly well-organised process, ministers left the meeting to tell reporters they were confident Johnson would prevail in the vote. “This is a prime minister who has delivered time and time again, both electorally for our party and for our country,” said Brandon Lewis, the Northern Ireland secretary and a key Johnson cabinet ally.

“The PM was very much in serious mode. It was lighter on jokes, heavy on plans and policy,” he said. “He basically said: ‘This is the plan, and I’m yet to see any alternative plan from anywhere else.’ You’re not going to win over everyone in the room, because there are people whose minds are made up, but I think a lot of people have seen from him the thing they wanted to see in times like this.”
#Boris Johnson  #Johnson
Add Comment