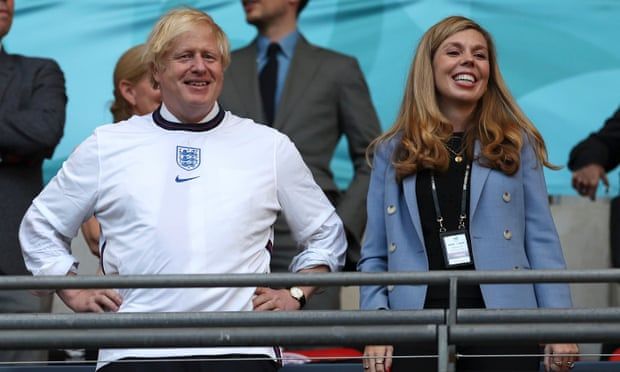 Boris Johnson followed guidance in car without mask, says No 10

Asked why the prime minister was not wearing a mask in the government Range Rover at Wembley, his spokesperson said: “The PM was getting into the car, and in line with guidance he put his mask on very shortly afterwards.”

The photographs, first printed in the Mirror, show Johnson in the car as it drives away after he watched England beat Denmark 2-1 in the Euro 2020 semi-final. Others in the vehicle, including security staff and his wife, Carrie, were wearing masks.

Asked why Johnson had not initially worn a mask, his spokesperson said: “I haven’t asked him that question specifically, but the important point is, he put his mask on very shortly after getting into the car.”

Under Covid restrictions still in force, people are obliged to wear a mask inside a taxi and can be fined if they do not. While government cars fall outside this requirement, the guidance for ministers is to wear a mask whenever they are inside a vehicle.

Johnson’s spokesperson confirmed this guidance remained in place, but nonetheless argued that the prime minister followed it even though he was not initially wearing a mask.

Under the final stage of Covid unlocking from 19 July, expected to be confirmed on Monday, masks will no longer be mandatory in any locations, although Johnson and his ministers have said it would be recommended to use one in non-distanced indoor locations.

Last year Johnson’s father, Stanley, apologised after being seen either not wearing a mask or having one pulled down below his face three times within a week – at a train station, on the London underground and in a shop.
#Covid  #Boris Johnson
Add Comment