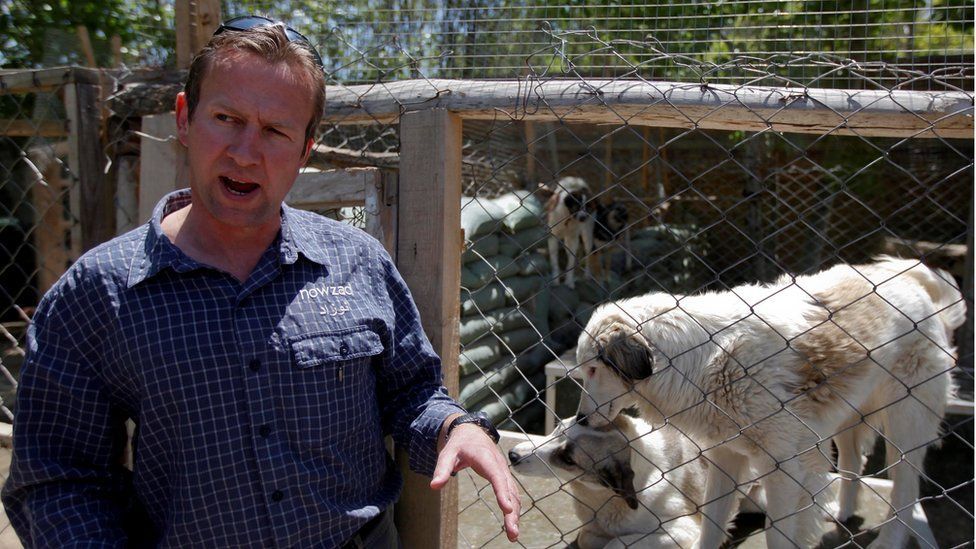 Boris Johnson has rejected claims that he authorised the evacuation of animals from Afghanistan during the fall of Kabul last year.

It comes after emails from officials published by MPs suggested the prime minister intervened in the evacuation of the animal charity Nowzad.

But Mr Johnson denied this, and added that the idea animals were prioritised over people was "total rhubarb".

Earlier, Labour said his story was "not credible" and accused him of lying.

Further emails from the time of the evacuation, seen by BBC Newsnight, show Downing Street's guidance was sought on approving Nowzad's airlift.

On Wednesday, the Commons Foreign Affairs Committee published several emails as part of its inquiry into the evacuation of people from Kabul.

About 15,000 people were airlifted out of the Afghan capital last August, as the Taliban took control after the withdrawal of Western forces.

Among these were Pen Farthing, an ex-Royal Marine who runs the Nowzad animal charity, and 150 animals, on a chartered plane paid for by donations.

The UK government sponsored clearance for it, leading to a row over whether animals had been prioritised over people during the rescue effort.

The charity's Afghan staff made it to the airport with paperwork from the British government to leave.

But Mr Farthing said last-minute changes by the US authorities to require a passport with a visa meant they were not allowed into the airport. They later made it safely to Pakistan.

Two of the emails published by the committee on Wednesday suggest the PM was involved in authorising the charity's evacuation.

Asked on Thursday whether he had intervened, Mr Johnson replied: "Absolutely not".

But BBC Newsnight's Sima Kotecha has seen two emails with the subject heading "Pen Farthing and dogs", showing the Foreign Office and the prime minister's special representative for Afghanistan, Nigel Casey, sought guidance from No 10 over the issue.

One of the emails published by the Foreign Affairs Committee shows an unnamed official in Foreign Office Minister Zac Goldsmith's office writing to colleagues working on the evacuation.

"Equivalent charity Nowzad, run by an ex-Royal Marine, has received a lot of publicity and the PM has just authorised their staff and animals to be evacuated, [animal charity - name redacted] are hoping to be treated in the same capacity."

Another email from an unnamed Foreign Office official, sent on the same day, also referenced Nowzad in a request for clearance for another charity.

The official wrote: "In light of the PM's decision earlier today to evacuate the staff of the Nowzad animal charity, the [animal charity - name redacted] (another animal rights NGO) is asking for agreement to the entry of [details redacted] staff, all Afghan nationals".

In a written statement to the committee, Mr Farthing said no UK government "capacity" had been used to transport the animals.

On Thursday, the PM's spokesman said he played "no role in authorising individual evacuations from Afghanistan, including Nowzad staff and animals".

The spokesman added: "It's not uncommon in Whitehall for decisions to be interpreted or portrayed as coming directly from the prime minster even when that's not the case.

"It's our understanding that's what happened in this instance."

"The prime minister has lied about what he did and the actions he took during that time," she added.

"I think it's becoming increasingly clear that you cannot believe a word that our prime minister says."