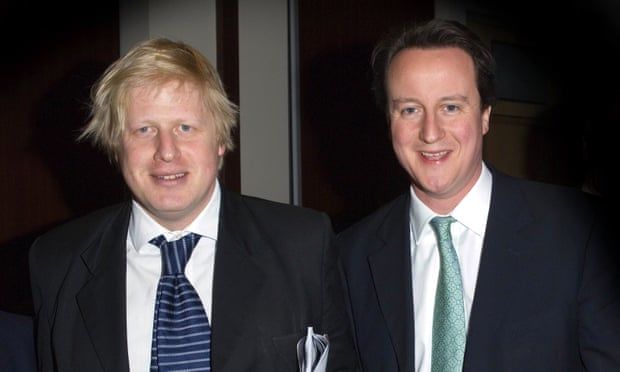 Boris Johnson can ‘get away with things’ others can’t, says David Cameron

Ex-PM also says Johnson has presided over a more adversarial relationship with media
Boris Johnson can “get away with things that mere mortals can’t seem to”, the former prime minister David Cameron has said, while suggesting there has been an “arms race” between politicians and the media to outwit one another.

Johnson’s team have significantly changed relationships with the media – hiring personal photographers on to the No 10 staff who often snap key events instead of photographers from media organisations.

Johnson has also used taped clips to make announcements – including most recently the announcement of no new restrictions before Christmas – instead of appearing at a press conference or in front of MPs.

In an interview with Adam Boulton for Feral Beasts, a documentary exploring Britain and the media, Cameron said the relationship had become more adversarial.

“I think there has been a bit of an arms race in a way,” Cameron said. “Politicians have tooled up with special advisers and the spin doctors, and the media have tooled up by even more aggressive ‘gotcha’ interviews to get that magic moment.

“I think we have got to try and have a relationship still distant and confrontational by moments – but understanding that you have got legitimate questions, but we have also got a responsibility to explain what we are doing. And can we try and find a bit of space for those things to coexist.”

Cameron had also made a request for a personal official photographer, which was declined, which prompted him to say Johnson could get away with more than others.

He also criticised the prime minister’s decision to boycott appearances on BBC Radio 4’s flagship Today programme – his appearance on the show in October was the first time he had been on it in two years.

Cameron was criticised during his time in No 10 for avoiding press scrutiny. As Conservative leader he had pledged to hold monthly press conferences but those were soon ditched.

“But, look, I think you shouldn’t do this to bypass the media. You go on having … whether it is press conferences or interviews or media events – this is important,” Cameron said. “And I always did. Yes, the press conferences were rather infrequent, but I never held back from going on the Today programme and coming on your show.

“I mean, we were always available and keen to engage and to answer questions.”

Johnson had promised a more open relationship with the press with plans for televised media briefings from a £2m refurbished media suite and hired Allegra Stratton as an official spokesperson to front them.

But rows over the briefings eventually led to the departure of several senior staff and they were cancelled. Stratton resigned this month after footage leaked of briefing rehearsals in which staff joked about Downing Street Christmas parties.
#Boris Johnson  #Johnson
Add Comment