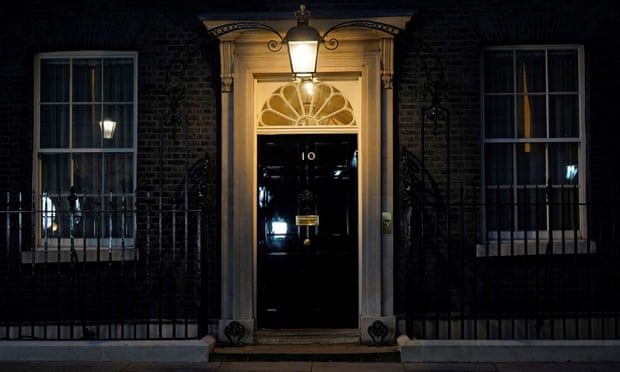 Boris Johnson attended a prosecco-fuelled leaving do for a No 10 aide during the strict post-Christmas lockdown, which is now under police investigation, the Guardian has learned.

Sue Gray’s investigation into lockdown parties this week revealed several events that had not previously been publicised, including a gathering on 14 January 2021 “on the departure of two No 10 private secretaries”. But the redacted report revealed no further details.

Sources said the event was held in Downing Street in part as a leaving do for a senior policy adviser who is now a top civil servant working in the Department for Digital, Culture, Media and Sport.

Prosecco is alleged to have been drunk by some staff, with Johnson understood to have given a speech thanking the official for their work and staying for around five minutes.

England’s third national Covid lockdown came into force just over a week earlier, on 6 January, with a “stay at home” order banning people from leaving their home except for a handful of reasons including where it was not possible to work from home. The previous month, the prime minister had effectively cancelled Christmas for millions of people amid surging Covid cases.

The revelation places Johnson at another event under investigation by Scotland Yard. He also attended a “bring your own booze” party on 20 May 2020 and a 56th birthday celebration on 19 June that year. It is not known whether he was present at two alleged Downing Street gatherings on 13 November, the day his aide Dominic Cummings quit, including one in the private flat of Boris and Carrie Johnson.

No 10 did not deny reports in the Daily Telegraph that the prime minister was seen going up to the flat on the night in question, where Abba songs including The Winner Takes It All were apparently played.

Sources also said another gathering identified by Gray – on 18 June 2020 in the Cabinet Office – was in honour of a No 10 official who moved to become a senior diplomat in the US. Hannah Young was Johnson’s lead official on home affairs policy and moved last year to become deputy consul general at the British Consulate General in New York.

A government insider suggested the gathering was at the more serious end of the spectrum of events investigated by Gray, a senior civil servant. At the time, gatherings of two people or more indoors were prohibited, with the exception of those “reasonably necessary … for work purposes”.

A Foreign Office spokesperson said: “It would not be appropriate to comment while a Metropolitan police investigation is ongoing.” No 10 declined to comment.

Although Johnson initially declined to commit to publishing Gray’s full report when Scotland Yard concludes its inquiry, No 10 backtracked later that day and confirmed the prime minister would ask Gray “to update her work in light of what is found” and committed to “publish that update”. 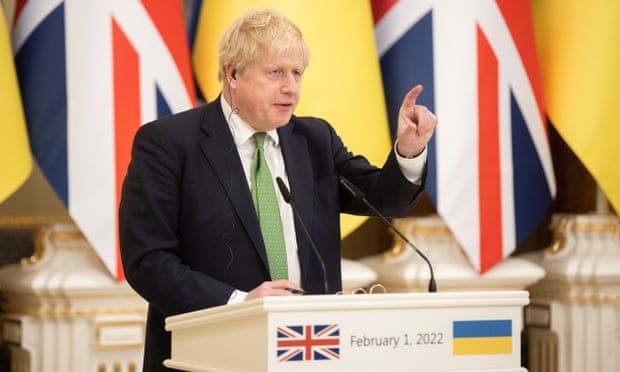 Boris Johnson, pictured during a visit to Ukraine on Tuesday, reportedly stayed at the leaving do for around five minutes.

Downing Street was again forced into a U-turn on Tuesday, having initially refused to confirm whether it would reveal any fixed penalty notice that is issued to Johnson by police for breaching Covid rules.

Johnson’s spokesman acknowledged the “significant public interest” in the matter, and when asked if they would say if the prime minister was fined, they said: “Hypothetically, yes.”

Meanwhile, Cummings claimed on Tuesday that there were “photos of the PM at parties under investigation”, adding that he had spoken to people who said they had seen photos of parties in Johnson’s flat.

He claimed that if police talked to people working in No 10 about the alleged flat party on 13 November then there would be “witnesses who say ‘we could all hear a party with Abba playing’”.

Cummings went on to give a scathing assessment of the prime minister’s capacity for truthfulness. Writing on his Substack, he said: “People also underestimate the extent to which he lies to literally everybody literally all day – including to Carrie and about
Carrie.

“‘Lies’ isn’t even a useful word with him – he lives inside a fog of invention and ‘believes’ whatever he has to in the moment. E.g He both knows he’s lying about the parties AND thinks he did nothing wrong. This doesn’t make ‘sense’ unless you’ve watched him carefully or similar sociopaths.”

Government insiders have not been told how long the police investigation could take but hope it will only be a matter of weeks given the substantial evidence gathering already done by a Cabinet Office team of around half a dozen people.