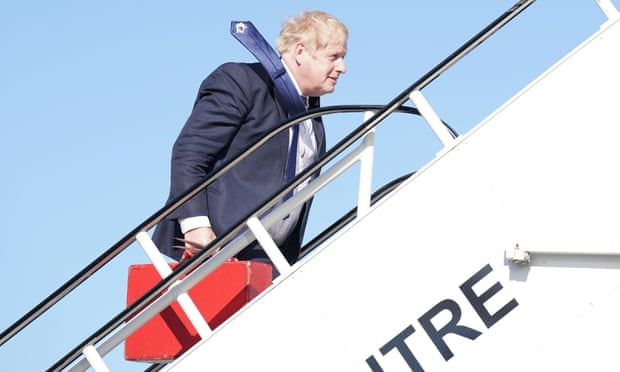 Senior Tories including Steve Baker, who separately called on Johnson to resign over the Partygate revelations, have urged the prime minister to remove the levies, which are set to cost about £153 per household this year and are used to fund energy efficiency measures and renewables.

Other Conservatives, including the former Brexit minister David Frost and the party chair, Oliver Dowden, have hit out against what Dowden recently called “net zero dogma”.

But when asked about reports the government could scrap the green levies, Johnson appeared to take a sideswipe against sceptical colleagues.

“This is very important what I’m saying – there’s a lot of prejudice against the green agenda,” he said. “Actually green technology, green, sustainable electricity can help to reduce bills. Overall if you look at what we have done with renewables it has helped to reduce bills over the last few years and will continue to do so.”

He added: “That’s why one of the things I want to do is use this moment to have, to really drive towards more offshore wind turbines.”

As well as the levy on household bills, energy firms pay a £1bn charge, the energy company obligation, to fund insulation projects. Experts recently warned that scrapping it could cost more than 30,000 jobs.

Government sources said both measures were based on long-term contracts and the only practical way to cut the cost for households would be for the Treasury to meet it instead, something Rishi Sunak has been reluctant to do.

Tory MPs have become increasingly vocal in their scepticism about the government’s green policies since last autumn’s Cop26 summit in Glasgow, with divisions emerging over onshore wind, and the controversial practice of fracking, which some cabinet ministers are keen to see revived.

A group of Tory backbenchers including Baker have formed the Net Zero Scrutiny Group to put pressure on ministers over some of the measures needed to meet the pledges made at Cop26.

Baker responded to reports that green levies could be dropped earlier this week by saying: “Making the public poorer and colder never seemed likely to survive contact with electors.”

Frost, who resigned in December, has since been highly critical of Johnson’s stance on a number of issues. He recently urged the prime minister to remove “the neo-socialists, green fanatics and pro-woke crowd” from Downing Street.

The government is under mounting pressure to take fresh action to cushion the impact of soaring prices for food, fuel and other commodities. Rishi Sunak was criticised for failing to do enough to help struggling families cope with rocketing costs at last month’s spring statement.

But Johnson defended the chancellor, who was widely reported to have considered resigning after receiving a fixed-penalty notice for attending Johnson’s lockdown birthday party.

Asked whether Sunak would still be in place in the autumn, when government sources have suggested there could be fresh measures to help cash-strapped households, Johnson said: “The answer to that is yes.”

Asked if emergency measures could be brought in before the autumn, when the energy price cap is expected to rise sharply again, Johnson said: “We will do everything we can to help people through the aftershocks of Covid as we have during the pandemic.”

He declined to be drawn into guaranteeing the future of any other cabinet ministers, amid speculation he could reshuffle his top team before the summer recess.

However, he praised the home secretary for her widely criticised migration policy, under which asylum seekers arriving in the UK face deportation to Rwanda.

Pressed on whether Priti Patel’s job was safe, he said: “You’re not going to get any more out of me about politicians or Westminster politics narrowly conceived. We’ve got to focus on the agenda for the country.”
#Boris Johnson  #Priti Patel  #Johnson  #Covid
Add Comment