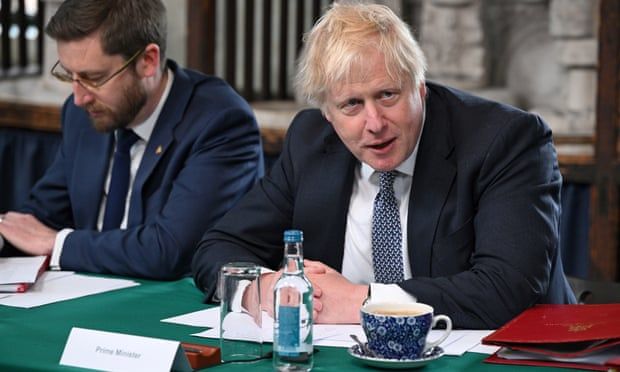 Boris Johnson is among dozens of No 10 officials warned by Sue Gray they are facing criticism in her Partygate report next week, as a former civil service chief said the “real issue” was the leadership of the prime minister and his cabinet secretary, Simon Case.

Johnson is one of 20 to 30 current and former staffers who have been notified by letter that accounts of their conduct will feature in her final report on the lockdown-busting parties. This is now likely to be published next week after Scotland Yard handed out 126 fixed-penalty notices to people from No 10, including one for Johnson but many for more junior staff.

On Friday night, it emerged Johnson and Gray had a private meeting about the investigation some weeks ago, although sources on both sides insisted the contents of the report was not discussed. One described it as a progress meeting taking stock of the process.

Whitehall sources said the report was likely to be heavily critical of the culture that arose in the civil service, which Johnson has attempted partly to address this week with a shake-up of his No 10 operation to bring more under his own control.

However, Bob Kerslake, a crossbench peer and former leader of the civil service, said Partygate was “about conduct and behaviours that can’t be dealt with by changing structures”.

He said: “It could improve efficiency but I’m not sure that in itself could have altered the course of events when the real issue was the leadership at the top, truthfully with the prime minister, and I have to say potentially with the cabinet secretary but until we see Sue’s report it is hard to make that judgment.”

Case is not among those who received a fixed penalty, despite a party in his office having been under investigation. He was due to appear at the public administration committee next week but has pulled out, leading its Tory chairman, William Wragg, to say it “puts government transparency in a poor light”.

He added: “The session with the cabinet secretary was an important one considering the number of propriety and ethics issues on the agenda.”

Asked why Case had pulled out, a Cabinet Office spokesperson said: “The cabinet secretary and director general for property and ethics have been rescheduled to appear at the committee in June.”

The cabinet secretary, who formerly headed up the civil service in No 10, is the subject of considerable anger among officials, many of whom feel they have been unfairly penalised after cooperating with the Gray report – unlike their superiors.

Gary Graham, a deputy general secretary of the Prospect union, suggested in a BBC interview on Friday that the prime minister should consider his position. He said the key issue in the Gray report should be “who were the key decision-makers in No 10 and who set the culture … there were a number of quite catastrophic decisions made at senior level, including by the prime minister, and those should not be put at the door of junior staff.”

A spokesperson for the PCS, the union that represents 180,000 civil servants and will next week vote on national strike action, was also highly critical of the way junior civil servants appeared to have been punished for events that were known about by more senior staff.

“It’s one rule for the prime minister, cabinet ministers and senior civil servants who organised the Downing Street parties, another for junior staffers,” he said. “Once again, this government shows little – or no – respect to our members who worked so hard keeping the country going during the pandemic.”

Whitehall sources said No 10 had been pressing for Gray’s report to be published as early as Monday, giving those sent warning letters the weekend to respond if they wish.

But the report is understood to be more likely to come midweek, given some of the recipients of warning letters may want to challenge the findings or even hire lawyers to dispute any facts.

Not all of those sent a letter will be named, but they have been sent summaries of how their conduct is portrayed in the report. No 10 said on Friday it was not blocking the release of any names, which are likely to be at senior civil service level only.

After Gray’s report is published and Johnson makes a statement to the Commons giving his own account of the Partygate saga, the prime minister is keen to turn public attention to his government’s response to the cost of living crisis.

He told the Conservative conference in Wales on Friday that he wanted to “use the firepower we have built up to put our arms around people, just as we did during the pandemic”.

There had been speculation that No 10 and No 11 could come to an agreement on help for households, including measures to help people with bills, by the middle of next week. But despite Johnson’s hint of help to come, a Treasury source played down the idea of an imminent move, suggesting it was unlikely an announcement from Rishi Sunak, the chancellor, would come before the House of Commons rises for a Whitsun recess next Thursday.

“Rishi is still looking at a whole variety of options, and hasn’t settled yet on what the best way forward is: we’re a bit of a way off,” the source said. Options under consideration include an expansion of the existing warm homes discount, which cuts the energy bills of the poorest consumers; another one-off payment like the council tax cut that came into force in April; or much more costly across-the-board interventions such as a VAT cut, or bringing forward the income tax reduction planned for 2024.

With a potential delay to the announcement on cost of living, Conservative backbenchers are concerned about political drift, and have urged Johnson’s team to “knuckle down” in the weeks ahead.

“There’s a lot of frustration that although there are some departments doing good things, there’s nothing that threads it all together: there’s no central theme, there’s no central purpose,” said one former minister. “If I were in No 10, instead of feeling exuberant I would be knuckling down.”

MPs expressed bemusement at the Met’s handling of the investigation, with one describing what they called colleagues’ “general mystification”, adding: “It does seem very unclear as to how some people at the same event have been fined and not others.”