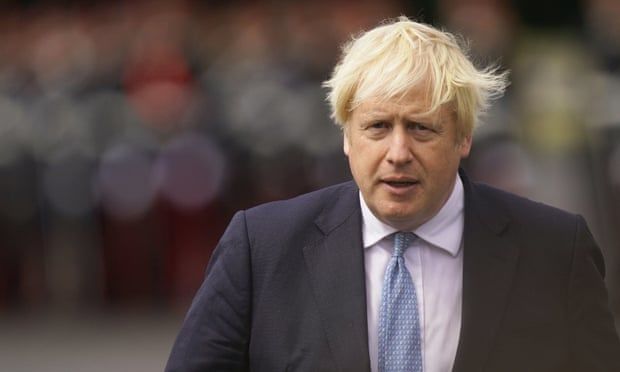 PM says UN report is ‘sobering reading’ but Labour say he is ‘failing to treat the crisis with the seriousness it deserves’
johnson">Boris Johnson has been accused of climate crisis complacency after the publication of the warning from UN scientists that rising carbon emissions have already caused “irreversible” environmental change.

The prime minister described the report from the Intergovernmental Panel on Climate Change (IPCC) as “sobering reading”, and said he hoped it would be a wake-up call for the world ahead of the Cop26 global climate conference the UK is hosting in November.

But the Labour leader, Sir Keir Starmer, said that IPCC report showed that “the biggest threat we now face is not climate denial but climate delay” and that, on this issue, Johnson was “failing to treat the crisis with the seriousness it deserves”.

The Lib Dem leader, Ed Davey, claimed that the UK was “showing other countries that climate inaction is acceptable” and the Green party went further, arguing that, by accepting the international target to limit temperature rises to 1.5C above pre-industrial levels, the government was ignoring the urgency of the problem.

“From floods and fires to droughts and rising sea levels, we are already living in a changed climate and we now have a very small window of opportunity to reverse these effects through bold and urgent action,” said Amelia Womack, the Green party’s deputy leader.

Labour has said Johnson’s pledge to cut UK carbon emissions by 68% by 2030 compared with 1990 levels is inadequate and that the target should be considerably above 70%. The Lib Dems are calling for a more ambitious green recovery plan, and the Greens want a global carbon tax, as well as significantly higher investment in public transport and home insulation.

Environmental campaigners have also accused the government of failing to show a lead. Connor Schwartz, the climate lead at Friends of the Earth, said: “If the government wants to show they respect the world’s leading scientists on climate chaos, they can start by cancelling the Cambo oilfield, scrapping the coalmine in Cumbria, and ending UK funding for the mega-gas project in Mozambique; they can do that today.”

Extinction Rebellion (XR) said that from Monday 23 August it would stage protest events in London for two weeks, blocking roads and occupying buildings. The aim is to disrupt the City and what XR calls “the root cause of the climate and ecological crisis – the political economy”.

Clare Farrell, an XR cofounder, said: “We are in the midst of a collective act of global, social evil, which is unprecedented in all of history. We spend more time measuring it than trying to stop it: this is in and of itself a crime.”

Ministers fear that Cop26, which has been billed as a landmark moment in the global effort to reduce emissions, may end up being seen as a damp squib. It is meant to be when countries set out new details – in the form of nationally determined contributions (NDCs) – of how they will contribute to the goal of limiting global temperature rises to 1.5C above pre-industrial levels, but some of the biggest economies have not yet done so, and other plans are considered inadequate by climate experts.

The government is hoping that the IPCC report will inject some fresh urgency into the process. “The future, of course, is not yet written and the very worst of climate change is still avoidable,” said Alok Sharma, the cabinet minister who is president of Cop26.

He went on: “Based on all the conversations that I’ve had, I can tell you that there is a clear desire among governments to keep that 1.5 degrees within reach. The reality is that we need far more in terms of action, and action that actually follows the facts.”

Sharma said the G20 countries were responsible for 80% of global emissions, but that only eight of them had submitted new NDCs more ambitious than their previous ones. “This really must change before Cop26 in November,” he said.
#Boris Johnson  #Johnson
Add Comment