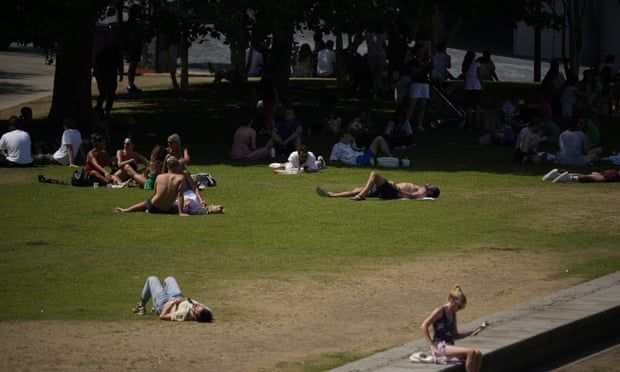 Airport runways have been closed and 999 calls have surged as Britain endured some of the hottest temperatures on record, which are forecast to rise again on Tuesday to a record-breaking 41C (106F) in parts of southern and central England.

Boris Johnson was accused of being “checked out”, as the prime minister missed an emergency Cobra meeting about the searing heat and attended the Farnborough airshow, where he gave a whimsical speech about completing a loop the loop and a barrel roll in a Typhoon fighter jet.

National Rail has said that on Tuesday most routes across England and Wales will be affected by the hot weather, with customers told only to travel if “absolutely necessary … There will be delays, cancellations and last-minute changes to train services due to the unprecedented record heat on those days.”

There will be no Thameslink or Great Northern trains running in any location north of London, from London Blackfriars via St Pancras, or from London King’s Cross or London Moorgate on Tuesday. Merseyrail said the number of trains running and journey times will be “seriously affected”, with some routes closed completely.

LNER will run no trains from south of York and south of Leeds to London King’s Cross. Southern, South Eastern, South Western Railway and Great Western Railway are among the dozens of train companies running significantly reduced services across the country.

Transport for London (TfL) said London’s rail network would also be running a reduced service on Tuesday due to safety restrictions put into place to deal with the heat. Elsewhere, council gritters were on stand-by to spread sand on melting roads.

On Monday, Wales was the first to break records by recording a provisional new high of 35.3C at Gogerddan near Aberystwyth, which was surpassed a couple of hours later when 37.1C was reached in Hawarden, Flintshire.

By 4pm, England had logged a high of 38.1C at Santon Downham in Suffolk, just shy of the 38.7C record set in Cambridge in 2019. Scotland is poised to experience its hottest day on record on Tuesday.

Operations and medical appointments were cancelled because of the heat, NHS leaders said, and a fourth person died after getting into difficulty in the water. The body of a 16-year-old boy was recovered from Bray lake in Berkshire shortly before 11.45am, when the temperature was already 31C.

A 13-year-old boy who died on Sunday in a river near Ovingham, Northumberland, was named on Monday afternoon as Robert Hattersley.

On Saturday a 16-year-old boy died in Salford Quays, Greater Manchester, and a 50-year-old man died in a reservoir near Leeds.

On Monday evening the Metropolitan police said a 14-year-old boy was missing and believed drowned after getting into difficulty in the Thames in west London. 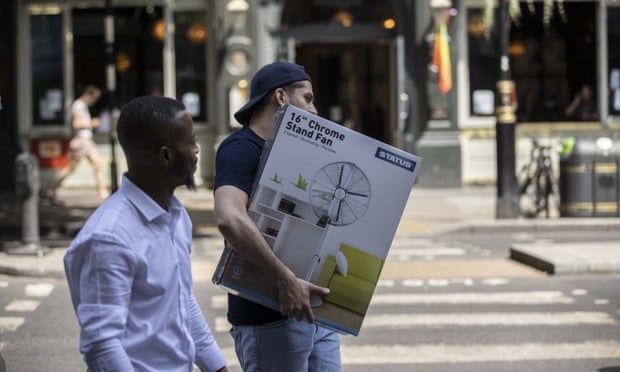 A man carries a fan home as he tries to stay cool in London.

Luton airport temporarily closed to flights after a runway defect was discovered. Passengers on an easyJet flight from Catania were told by the captain that they were unable to land at Luton because parts of the runway had in effect melted.

The runway at RAF Brize Norton was also closed. An RAF spokesperson said: “During this period of extreme temperature, flight safety remains our top priority, so aircraft are using alternative airfields.”

On the roads, car breakdowns were up by 10% as a result of the heat, the RAC said.

Miriam Deakin, the interim deputy chief executive of NHS Providers, said some trusts scaled back planned surgeries because operating theatres were too hot.

Matthew Taylor, the chief executive of the NHS Confederation, said the combination of “outdated” health premises and increasingly common record temperatures driving up demand for care may mean the summer is harder for the NHS to cope with than winter.

“Our buildings and estate are ill-equipped to deal with these kinds of temperatures and a lack of capital investment in the NHS over the last 10 years means we have very little resilience left to deal with crisis situations like this,” he said. 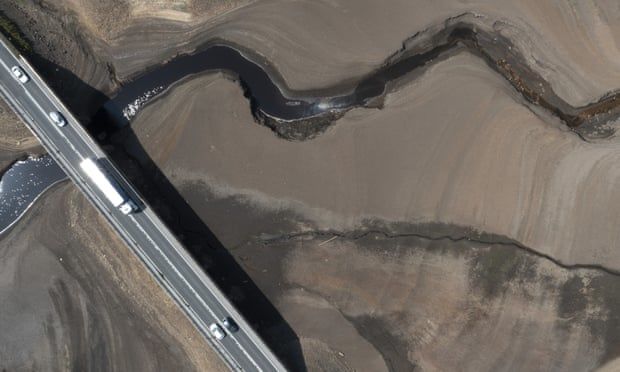 Vehicles cross a bridge over Woodhead reservoir in West Yorkshire, where water levels have plummeted.

Dozens of schools closed and many others cut their days short. Many will stay shut until Wednesday when temperatures are expected to drop to the mid-20s.

Care home operators said staff were working hard to ensure their vulnerable residents stayed cool and hydrated. NHS hospital kitchens made ice lollies for patients, while zoos in London and Bristol did the same for primates and other animals.

But with Johnson missing Cobra meetings while in Farnborough on Monday and throwing a party at Chequers at the weekend, the Labour leader, Keir Starmer, said voters were “seeing a prime minister who’s basically checked out, so he’s not really doing anything”.

The Cabinet Office minister Kit Malthouse, who chaired the latest Cobra meeting, said it was “very unfair criticism” and that the prime minister “appoints secretaries of state to do this kind of work and that’s what I’ve been doing”. He said the criticism was “a political attempt to create some air of panic” about the heatwave.

The heat drove millions to work from home, with road congestion down in London, Manchester, Birmingham and Glasgow, according to data from the satnav company TomTom.

Rail passenger numbers fell by 20%, Network Rail said, after heavily reduced timetables and speed restrictions were put in place to prevent rails from buckling. The east coast mainline from York and Leeds to London will be closed on Tuesday. 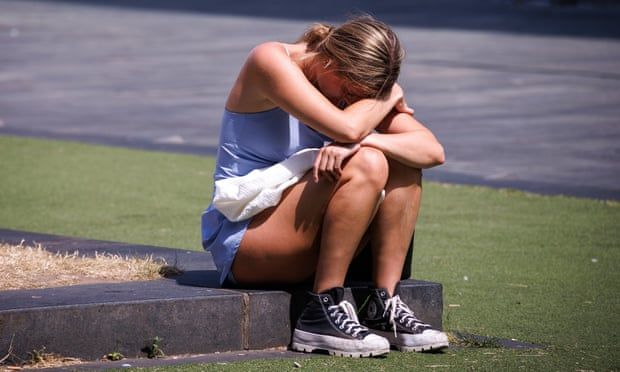 A woman rests her head on her arms as she struggles in the heat in Manchester.

Water use surged, particularly in the south, where Southern Water said demand was close to record levels. The industry body Water UK urged people to “carefully consider” their use in order to reduce the risk of shortages later this summer.

Downing Street gave an upbeat assessment of the country’s resilience, with a spokesperson saying: “There’s no indication of mass closures of schools, for example, the NHS is coping well … and Network Rail and others have already taken some mitigations with some reduced service and speed limits in place.”

Asked about deaths from the extreme heat, they said there had been “none that have been reported to us centrally at this point”.

Several thousand excess deaths are expected to result from the heatwave, but numbers are unlikely to be immediately available.

Meanwhile, the Met Office predicted temperatures such as these will be seen anywhere between one in every 15 and one in every three years by the end of this century, depending on the “emissions pathways” taken in the coming decades.

After the deputy prime minister, Dominic Raab, said on Sunday that people should be resilient enough to “enjoy the sunshine,” the Met Office chief executive, Penelope Endersby, said: “Heat undoubtedly causes many hundreds, thousands of excess deaths in heatwaves, so people do need to take care and follow the advice we’ve been putting out about keeping in the shade, keeping cool, keeping hydrated.”

Prof Hannah Cloke, a climate scientist at the University of Reading, said: “We know that heatwaves are killers. We still have people shrugging their shoulders saying this is [just] summer.”

Britons have been urged to stay inside during the hottest period of the day, between 11am and 4pm, and wear sun cream, a hat, stay in the shade and keep hydrated with water.

There are also warnings of wildfires, with people asked not to use barbecues or leave litter that could spark fires in the countryside.