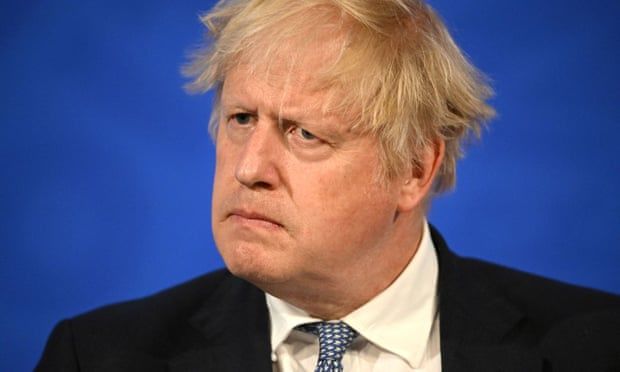 Boris Johnson accused of changing ministerial code to ‘save his skin’

Rewritten rules remove need to resign – instead ministers can apologise or temporarily lose pay for breaches
Boris Johnson has been accused of changing the ministerial code to help “save his skin” ahead of a new Partygate inquiry that could publish more photos and subject him to a public grilling by MPs.

The prime minister faced a barrage of criticism after he amended the rules on Friday to make clear that ministers will not always be expected to resign for breaching the code of conduct. Under new sanctions, they could apologise or temporarily lose their pay instead.

Johnson also blocked his independent ethics chief, Christopher Geidt, from gaining the power to launch his own investigations, and rewrote the foreword to the ministerial code, removing all references to honesty, integrity, transparency and accountability.

It comes as the PM faces an inquiry by the privileges committee into whether he misled parliament over lockdown parties in Downing Street – which could itself be a breach of the ministerial code.

Labour and the Liberal Democrats accused Johnson of rigging the system to “get himself off the hook” ahead of the inquiry.

No 10 said a new version of the ministerial code, published on Friday alongside a government statement saying it is “disproportionate to expect that any breach, however minor, should lead automatically to resignation or dismissal”, has the backing of the Committee on Standards in Public Life and Lord Geidt, the adviser on ministerial interests.

Ministers who knowingly mislead parliament are usually expected to resign – which is stated elsewhere in the code. However, Downing Street declined to say if Johnson would resign if found to have done so.

One reason given for changing the rules was to “avoid incentives for trivial or vexatious complaints, which may be made for partisan reasons”.

Chris Bryant, the Labour MP and chair of parliament’s standards committee, said the weakening of the system was “appalling”.

“The new ministerial code is a disgrace. It means that the tiny semblance of accountability disappears. ‘If you break the rules, just rewrite the rulebook’ is the motto of this despicable government,” he said.

Johnson remains under severe pressure over Partygate after the publication of the Sue Gray report. On Friday he suffered the first loss of a frontbencher since the report, ministerial aide Paul Holmes, who said his work as an MP had been “tarnished by the toxic culture that seemed to have permeated No 10”.

Bob Neill, a former minister and chair of the justice committee, also revealed he submitted a letter of no confidence this week.

“These events have undermined trust in not just the office of the prime minister but in the political process itself. To rebuild that trust and move on, a change in leadership is required,” he said. Neill later told the BBC that the change to the ministerial code was “not a wise move”.

With growing fears in the Conservative party that it may lose two byelections next month, in Tiverton and Wakefield, new modelling from YouGov found that of 88 “battleground” constituencies the party took from Labour at the last election or holds with a majority of less than 15 points, just three would remain in Tory hands. Among those that could swing red is Johnson’s own seat in west London.

Rebel MPs are planning to use next week’s recess to plot ways to oust the prime minister. One critic said the number of letters of no confidence “had to be” in the 40s – short of the 54 required to trigger a confidence vote but more than the almost 30 MPs who have gone public with criticism of Johnson.

A senior Conservative MP said: “Boris’s value to the party as PM is now exhausted and events will take their natural course. I cannot tell you whether it will crystallise on 6 June [after recess] or 27 June [the return to parliament after two byelections] but the parliamentary party knows it cannot fight and win the next election under Boris.”

There is a widening gulf between the expectations of Johnson’s allies and his critics, who expect to see him gone before the summer.

One cabinet minister said he did not believe the Gray report had changed people’s minds. “Either people are already bored of it or they are permanently enraged by it. I’m not sure anything is going to change now,” he said.

But despite this confidence, Johnson is facing a new headache with the start of the privileges committee inquiry within weeks, which is likely to keep Partygate in the headlines.

Separately, it is understood the Greater London Authority’s oversight committee is soon due to publish a report looking into London & Partners, the promotional agency linked to Johnson’s time as London mayor and the revelations about his relationship with the US businesswoman Jennifer Arcuri.

Three ministerial aides – Laura Farris, Alberto Costa and Andy Carter – are imminently expected to resign from their government jobs in order to be more independent as members of the privileges committee that will sit in judgment over the prime minister’s honesty.

It is expected to launch within weeks, before the summer break, and to last four or more months. The committee can sit in private or call witnesses in public – potentially including Johnson himself – and demand further documentary evidence, such as photographs from the government, if required.

Gray published only nine photos in her report, including ones showing Johnson alongside open bottles of wine and gin, but hundreds were seen by her inquiry.

Harriet Harman, the senior Labour MP, is likely to chair the privileges committee, with the probe expected to ask what, if any, assurances the PM was given that the parties were legal when he claimed there were no gatherings and that all lockdown guidance was followed.

Johnson could be found in contempt of parliament if he deliberately misled the Commons, but he could also be in breach of the ministerial code if he knowingly lied to MPs.

However, the ministerial code is governed by the prime minister himself, and Johnson resisted pressure to give Geidt the power to launch his own inquiries without consent.

Under his revised terms of reference, there will be an “enhanced process” to let Geidt initiate inquiries – but he will still require the PM’s consent before going ahead.

“Reflecting the prime minister’s accountability for the conduct of the executive, it is important that a role is retained for the prime minister in decisions about investigations,” the government statement said.

‘This prime minister is downgrading and debasing the principles of public life before our very eyes,” she said. “He should be tendering his resignation but is instead watering down the rules to save his own skin.”

Wendy Chamberlain, the Lib Dem chief whip, said it was an “appalling attempt by Boris Johnson to rig the rules to get himself off the hook”.

“It seems the Conservatives have learned nothing from the Owen Paterson scandal,” she said, referring to the MP who breached the MPs’ code of conduct but whose suspension the government attempted to block.
#Boris Johnson  #Johnson
Add Comment