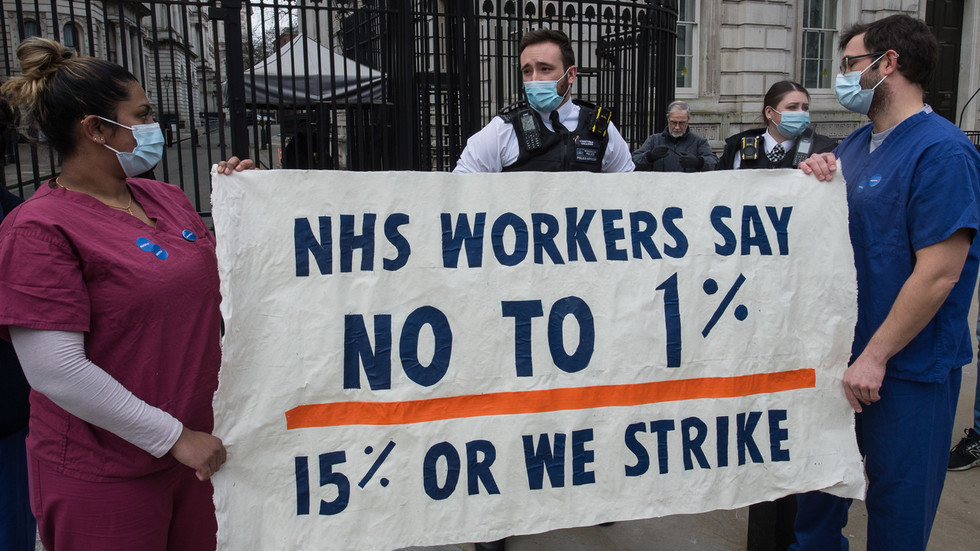 BoJo’s paltry pay rise for nurses, the heroes of Covid, is a typical ‘divide and conquer’ tactic. It’s time for another U-turn

The UK prime minister has defended a one percent pay rise for NHS nurses by pointing to workers getting no rise at all, pitting people against each other again. Maybe this time they’ll see through his divisive, diversionary ploys?
Boris Johnson has been defending his government’s plans. He’s done a lot of ‘defending of plans’ in the last year, along with a lot of ‘explaining of U-turns’ as he snakes and spins his way through the pandemic –⁠ in more ways than one.

The latest plan that’s needed defending is the one to give NHS nurses a measly one percent pay rise. It’s what is colloquially called a ‘dick move’.

Yes, these are the same nurses rightly being lauded for their frontline efforts during the pandemic and whom we were asked –⁠ including by Johnson himself –⁠ to applaud or bang baking trays for every Thursday evening during the first lockdown.

These are the same nurses who suffered real-term pay decreases during a decade of unnecessary austerity imposed by Johnson’s party. And whose working conditions have become so cruddy that there are more than 40,000 nursing vacancies in the NHS (equivalent to 13% of the total currently employed).

So, how did he try to convince these nurses –⁠ and the rest of us –⁠ that they should be happy with one percent and some raucous kitchen-utensil-based thanks?

He started by saying it was all the government could afford. A government that has spent hundreds of billions on the pandemic response –⁠ including, to dip into the Johnsonian lexicon, ‘spaffing’ tens of millions by giving contracts to their unqualified chums –⁠ couldn’t find a few quid more for people who are actually useful.

Knowing that this wasn’t enough, he then removed the ace from his crumpled sleeve.

“Don’t forget that there has been a public sector pay freeze,” he said. Nurses should be happy with little because the police, fire service, teachers and civil servants will get nothing.

This is the equivalent of cutting someone’s hand off and telling them to be grateful because everyone else had their arm cut off, then whispering to the one-armed that they should resent the merely one-handed for having two elbows, forcing the latter to defend their good fortune.

It’s the ancient tactic of 'divide and conquer’ or, as Johson would probably call it, divide et impera. (Did you know he speaks Latin? He doesn’t like to mention it.) And, of course, while they’re bickering with each other, neither group is pointing its remaining fingers at the people who are doing the chopping.

There are signs that it’s working, too. While senior nursing representatives are warning of strikes and of more staff leaving the profession due to the low pay, I’ve listened to radio shows on very moderate stations in which people have felt the need to angrily tell listeners that they have no sympathy for nurses because their situation is worse.

They’ve lost a job during the pandemic or had a company fold, they’re a prison or police officer whose pay won’t rise at all, they say. All are injustices caused by this irksome bug and no fault of their own, but they’re playing the government’s game and going for gold in the race to the bottom. My problems are bigger than your problems, so shut up.

It’s like Monty Python’s ‘Four Yorkshiremen’ sketch, in which the eponymous quartet compete over who had the most impoverished childhood: “I had to work 29 hours a day down t’mill and pay t’mill owner for permission to come to work” and so on.

And as this infighting carries on among the populace, the government dishes out limbs to its pals and demands not even a fingernail from those who can afford it.

It’s a tactic familiar to Johnson and his colleagues. They used their “we’re all in it together” mantra post-2010 as they stripped public services, suppressed wages, and then whipped up anti-immigrant feelings so people had someone other than the government to blame for their austerity-driven misery.

The lingering ‘them and us’ rhetoric of Brexit, too, has split a nation, distracting it from the government’s removal of civil and workers’ rights, mismanagement of the economy, and trade-deal negotiations that would have been better carried out by the crack team of Larry and Dilyn – the Downing Street cat and dog.

And all the time, the rich get richer, the gap gets wider, and we start thinking our neighbours are selfish, racist or scrounging wankers.

It’s so obvious and yet it keeps on working. Why? Because we’ve been led so far down this tortuous rabbit hole of finding other ordinary people to blame for our woes that we too rarely look towards the people with actual power and influence.

Johnson’s standing has even gone up in recent polls because, ironically, the NHS and its nurses have been great at vaccinating people. A tragic record of pandemic mismanagement that made Britain a corpse-laden plague island seems to count for nothing.

It’s probably a hopeless wish, but I’d love for the government’s treatment of the nurses to be a unifying moment that forces it into an umpteenth U-turn. For ordinary people to finally refuse to play its divisive game, stick together and give it the finger. If they still have one.
#Covid  #Boris Johnson
Add Comment