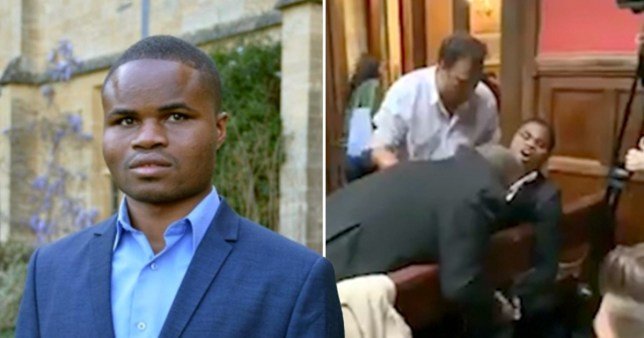 A blind student who was forcibly removed from the Oxford Union debating society has won compensation.

Ebenezer Azamati, then 25, was ‘manhandled’ by a security guard as he went to return to his seat ahead of a debate on October 17 last year.

Worried about disabled access to the chamber, the postgraduate student arrived early to place a book on a seat next to the door.

He then left to get dinner before returning to the reserved seat ahead of the debate.

However, when he returned, he was ‘forcibly and violently’ prevented from staying there.

Video footage showed an argument between security and the international relations student before he is bundled out of the chamber. A white cane is visible in the footage.

Brandan McGrath, who was president of the society, accused Mr Azamati of being violent and dishonest and banned him for two terms. He later retracted the ban and said sorry.

The union has now apologised again to Mr Azamati for the ‘acute distress’ and ‘serious reputational harm’ caused by unfounded allegations against him.

‘We accept that those allegations are wholly unfounded and untrue, and we apologise for making the statements that contained them,’ the union said in a statement posted on Twitter.

‘What happened to Mr Azamati was fundamentally wrong. We apologise to him unreservedly and have made a compensatory payment to him in recognition of this.

‘We must ensure that we become an institution in which such an incident can never recur. We are committed to that change.’

Oxford Union acknowledged Mr Azamati should not have been removed

The amount of compensation has not been disclosed but Mail Online reported the payout could be worth thousands of pounds.

Mr Azamati has previously said he didn’t feel welcome in the UK.

He said: ‘Being publicly removed from the Oxford Union Society made me feel unwelcome in the Union, Oxford and even the country.

Oxford Union agreed to review its policies and procedures

‘I felt that I was treated as not being human enough to deserve justice and fair treatment.’

The union said it accepted calls for ‘root and branch changes’ to be made at the society.

As part of the settlement agreed with Mr Azamati’s legal team, two independent lawyers will review the union’s policies and procedures in relation to equality and access.