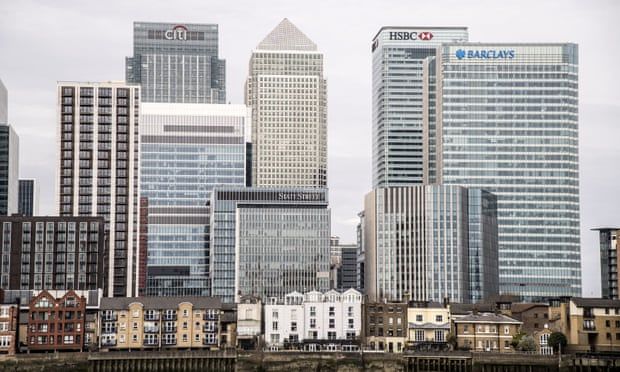 Inequality in Britain risks being driven up by the biggest boom in City bonuses and pay since the 2008 financial crisis, the country’s leading economics thinktank has warned.

The Institute for Fiscal Studies (IFS) said the return of bumper finance industry payouts meant the top 1% highest-paid workers were beginning to pull further away from the rest of the UK workforce despite the cost of living crisis hitting the country at large.

Suggesting that City bankers would be better insulated than most from the soaring cost of living, the thinktank said pay and bonus deals in the Square Mile had shot up in recent months and had risen by about twice as much as other sectors in the past two years.

According to the report, the mean monthly pay packet in the finance sector in February was 31% higher than in December 2019 in cash terms, compared with 14% across all sectors. Pay growth was driven by high earners, reflected in the higher mean figure. However, median pay in the finance industry was also significantly higher than for the economy at large. 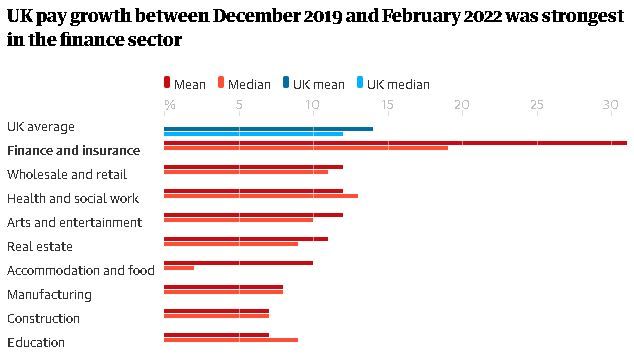 The IFS said City bankers, fund managers and other finance workers accounted for almost a third of all employees in the top 1% income bracket, meaning that a bumper period for this group would lift them further ahead of everyone else.

The IFS said this was in contrast with the trend from 2016 to 2020, when low earners saw the strongest pay growth.

Average annual pay growth, including bonuses, has increased in recent months as unemployment falls despite the end of furlough, reaching 5.4% in February. However, wage growth has failed to keep pace with soaring inflation driven by the rising cost of fuel and surging energy bills, exacerbated by Russia’s war in Ukraine. Inflation hit 7% in March and is expected to peak close to 10% later this year.

However, the average figures mask a growing divide between different sectors of the workforce, highlighting how the cost of living emergency is likely to hit some people harder than others. Private sector staff have seen the strongest annual growth in pay, and earnings in the public sector have fallen furthest behind inflation.

Xiaowei Xu, a senior research economist at the IFS, said: “Earnings inequality had been falling for some years before the pandemic hit, with low-paid workers seeing the strongest pay growth. The recent surge in pay among financial sector employees – particularly among top earners in the sector – has led to a reversal of this trend.

“This appears to be the first time since the financial crisis that finance sector earnings have taken off like this and it remains to be seen whether this is a one-off spike or a new trend.”

A spokesperson for UK Finance, the trade group for the financial services industry, said: “The banking and finance sector is a major source of employment around the country. It provides a range of high-skilled jobs and is one of the most important sources of tax revenue for the government.”