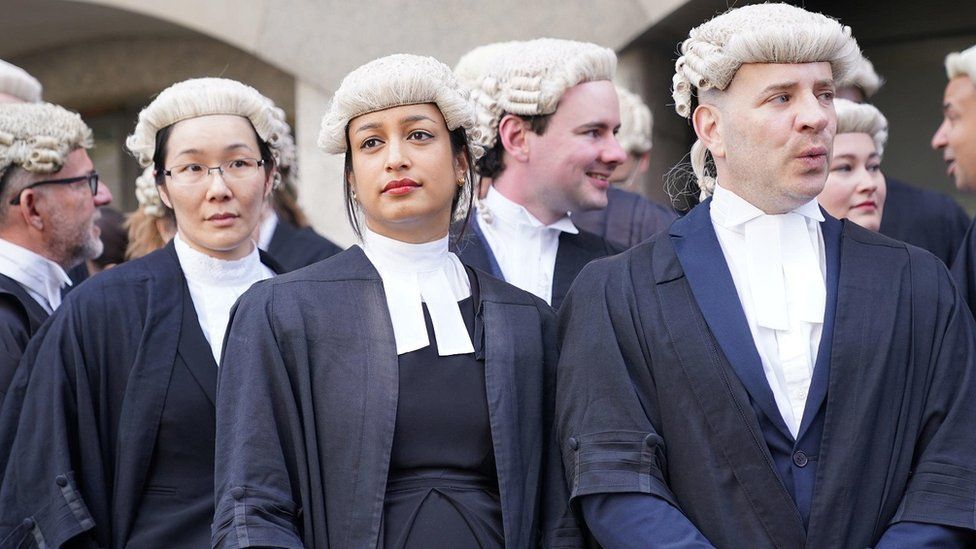 Eight out of 10 cases at London's Old Bailey were disrupted by the walkout, barristers outside the court said.

Barristers have rejected a proposed 15% rise in their fees for undertaking legal aid work and will be taking action over the next four weeks.

Members of the Criminal Bar Association (CBA) have said this is too low and called for a minimum 25% wage increase.

Jo Sidhu QC, chair of the CBA, said they had already lost a quarter of specialist criminal barristers over the last five years, with 300 leaving last year. 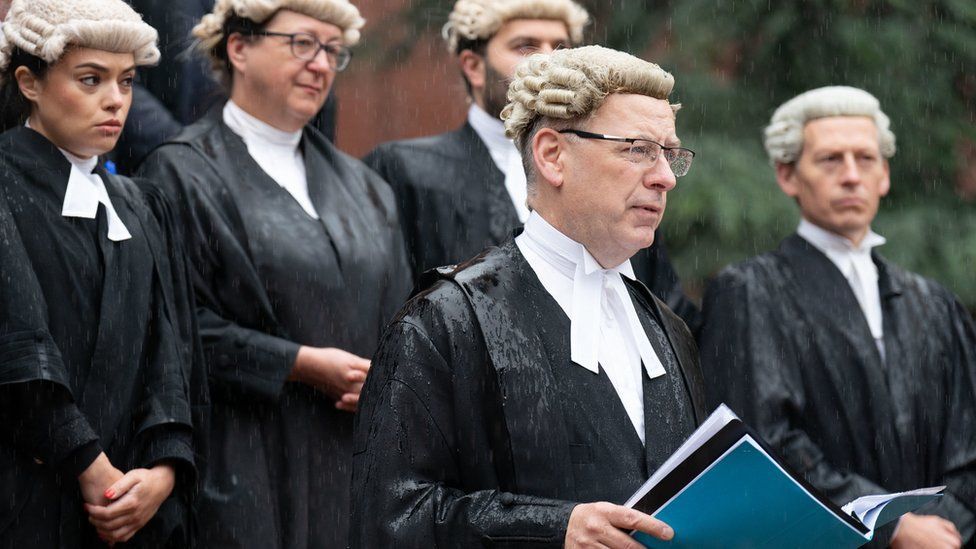 Kirsty Brimelow QC, deputy chair of the CBA, said the proposed rise in legal aid fees would not be introduced until the end of next year.

By then, she told the BBC, it would be too late to help and would not do enough to stem the flow of junior barristers leaving the bar.

Under the legal aid system, the government pays for barristers to ensure suspects who cannot afford lawyers are properly advised and represented.

Dozens of barristers have been rallying outside the Old Bailey in their robes and wigs, as two murder trials at the court - one involving a teenage suspect - were unable to get under way.

Others have been striking outside a number of high-profile courts, including Birmingham, Manchester, Cardiff and Bristol Crown Courts.

Those joining picket lines have been warned by the most senior judge in England and Wales, The Lord Chief Justice Lord Burnett, that they could face disciplinary proceedings for misconduct if they don't turn up to court. 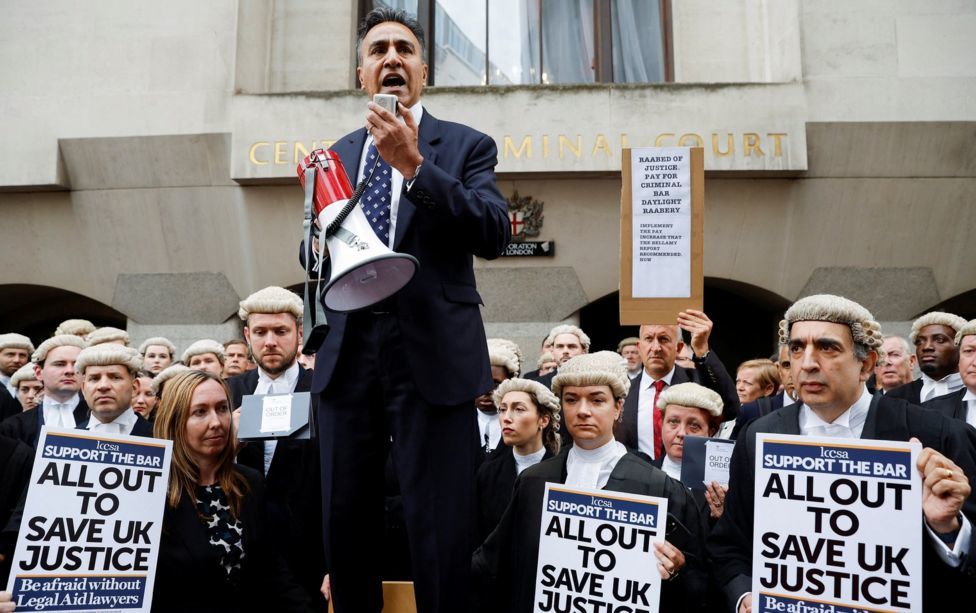 Chair of the CBA, Jo Sidhu QC, told striking colleagues they were "engulfed in a crisis of epic proportions"

Downing Street urged barristers to agree to the proposed 15% pay rise, which a spokesperson said would see a typical barrister earn around £7,000 more a year.

But Ms Brimelow, speaking outside Manchester Crown Court, told the BBC the system had run on "good will" for a long time, including throughout the pandemic, with junior barristers working "ridiculous hours."

She said the issue had been "caused by government, not by barristers."

The strikes start with walkouts on Monday and Tuesday and, for four weeks, increase by one day each week until a five-day strike is held from Monday 18 July to Friday 22 July.

How much do criminal lawyers earn?

Barristers are self-employed and often perceived as highly-paid.

The median salary for a criminal barrister in the year 2019-20 was £79,800, according to an independent review.

Meanwhile, new criminal barristers can earn as little as £9,000 once costs, including transport, are factored in, while some barristers say the time they spend preparing cases means their hourly earnings are below minimum wage.

Barristers with zero, one or two years of practise earned a median of £25,100 before expenses and a net figure of £18,800 after expenses.

Lawyers who work in other areas, such as private corporate law, can expect to earn £100,000 a year from very early in their careers. 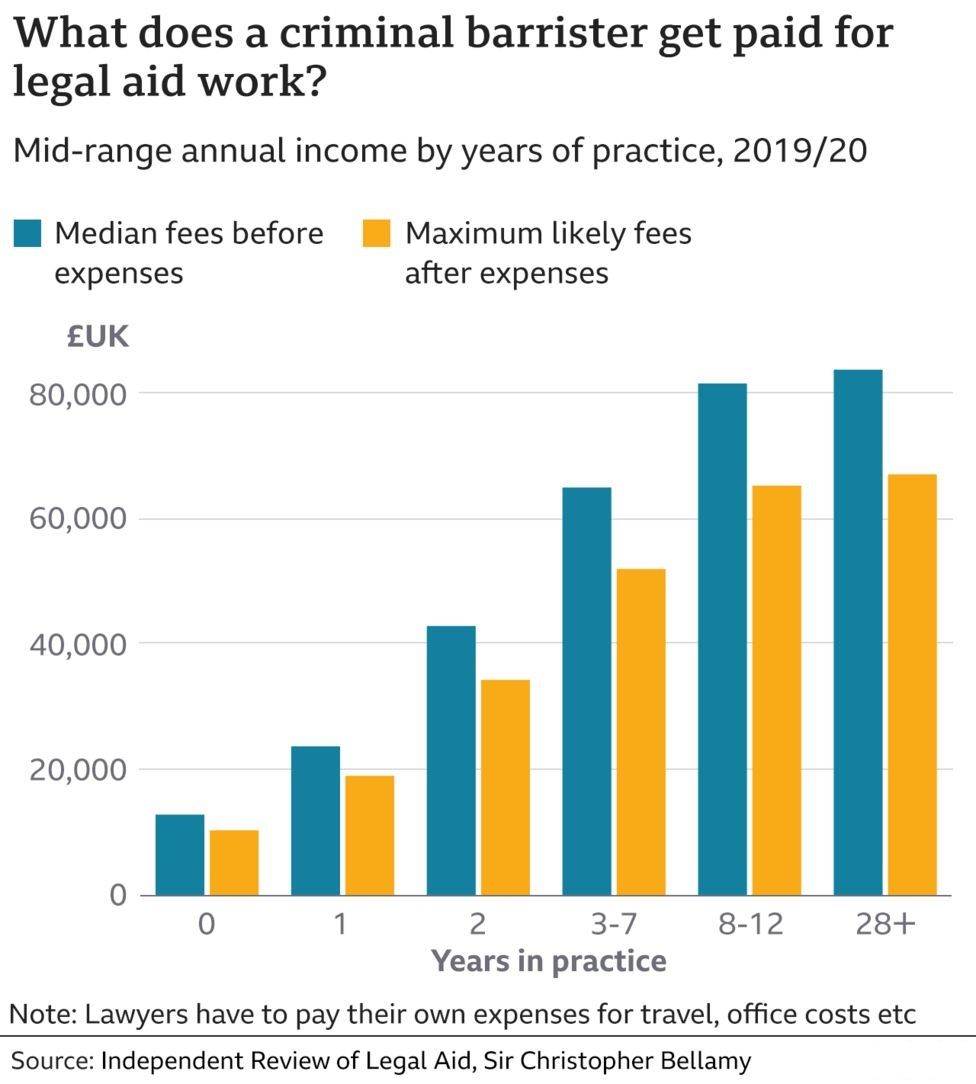 Junior barristers are working for a "pittance" - and sometimes for nothing at all if cases are adjourned, barrister and author Chris Daw told BBC News.

He said that the 15% pay rise proposed by the government would not "touch the sides" and will be "wiped out by inflation" by the time it comes into effect.

If nothing changes, he said strike action could go on until August "or beyond".

The number of lawyers working in criminal justice - both barristers who appear before judges in courts and solicitors who instruct them - has declined over the last decade, as many say they cannot make a living when they take on cases funded by legal aid.

'Not enough to pay my bills' 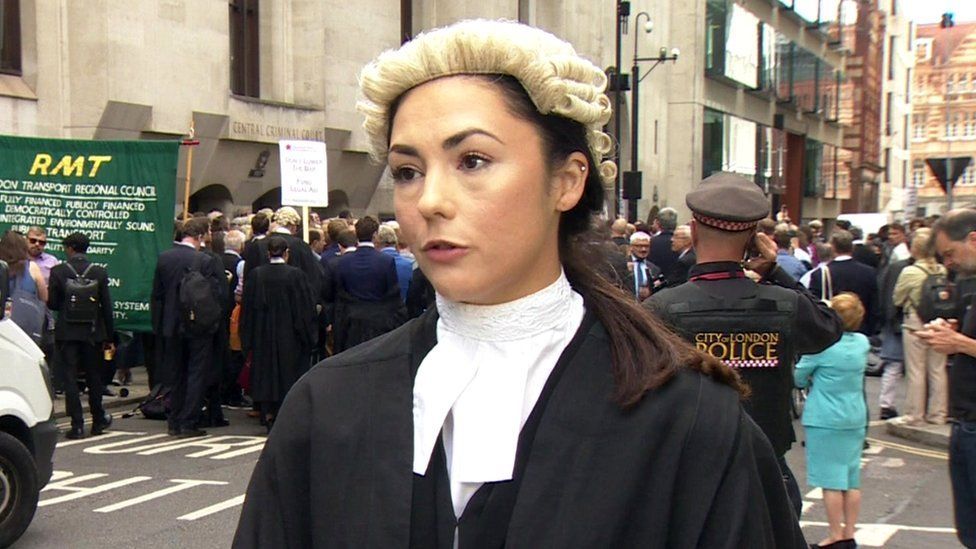 Junior criminal barrister Claire Stevenson says she finds out which court she'll be attending the day before - and any case could include reading hundreds of pages of documents.

"It may be that you have to spend the whole night reading... to ensure that you are acting in the best interests of your client," she tells the BBC.

Criminal barristers get paid for their preparation and the trial, as well as additional payments per day worked.

But she says lots of other unseen work means they're not paid enough: "People think you turn up on the day of the trial good to go - you don't."

When she began her career a few years ago she was paid about £12,000 a year, but since then has started working in other areas of law as the money "just simply wasn't enough to pay my bills". 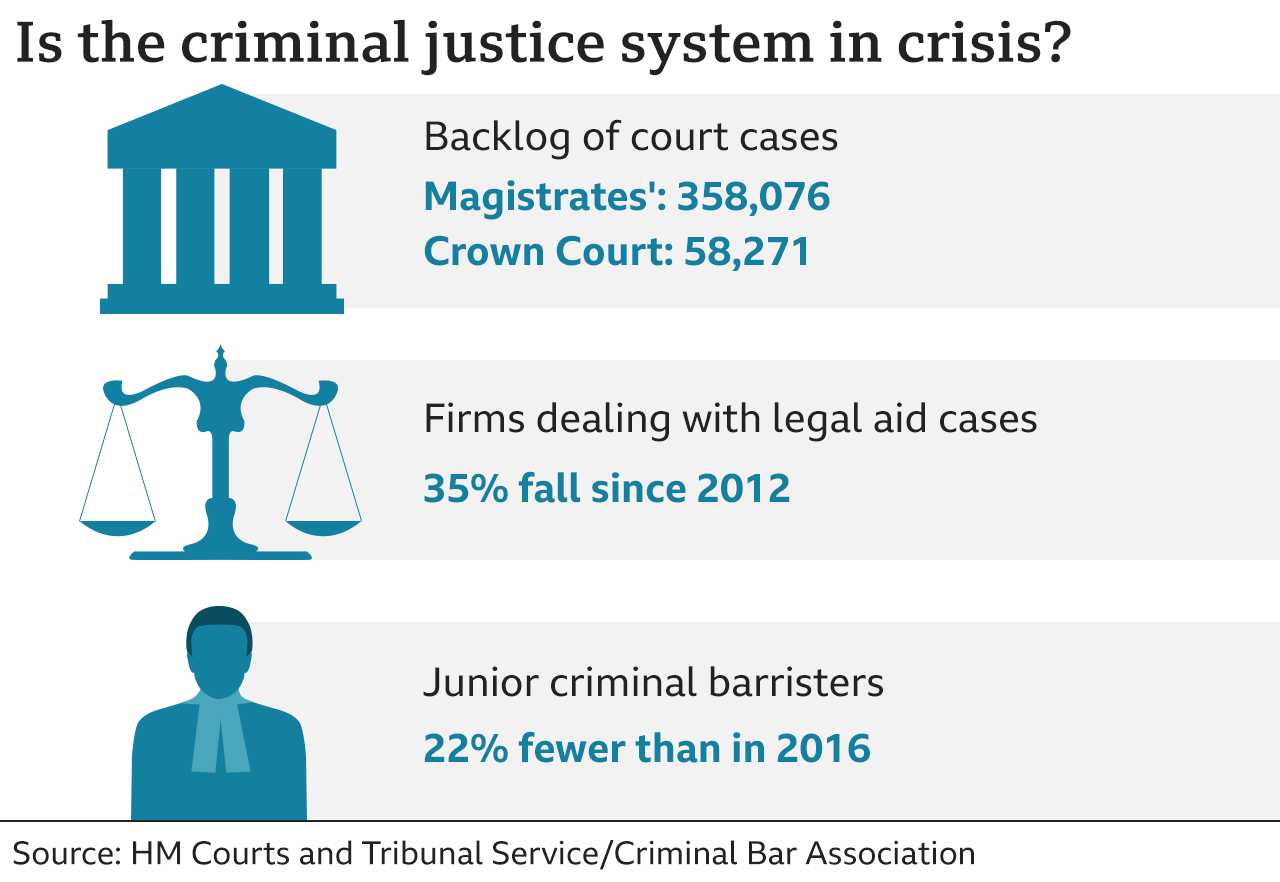 There were 567 criminal trials, including 60 sexual offence cases, unable to go ahead last year as there were no barristers to prosecute and defend them, according to Ms Brimelow.

And as of the end of April, there was a backlog of 58,271 cases, according to HM Courts and Tribunal Service.

Mr Raab said the strikes were "regrettable" and only 43.5% of CBA members voted for the "most disruptive option".

More than 81% of the 2,055 CBA members who cast their vote supported industrial action, and 53.4% of those also voted to refuse new cases and "return work" - stepping in and picking up court hearings for other colleagues.

The strike follows the three days of industrial action on Britain's railway network last week - the largest of its kind in 30 years.