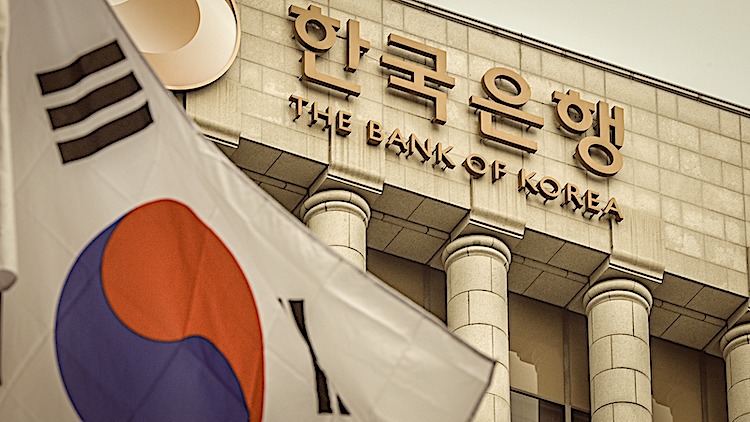 The Bank of Korea is testing a CBDC on Galaxy smartphones. The central bank is looking to pilot whether it’s possible to make offline crypto payments between users. For the last two years Samsung has been integrating blockchain-friendly features into its phones.

Samsung Electronics is participating in a project led by the Bank of Korea (BOK) to build a pilot platform for a central bank digital currency (CBDC).

CBDCs are central bank-backed digital currencies. The aim of a CBDC is to provide a digital alternative to a country’s traditional fiat currency. Some are based on blockchains, many are simply “inspired” by them. Most countries are researching CBDCs right now, most notably South Korea’s rival China, which has been piloting its digital yuan since last April.

The Bank of Korea announced it would hold a bid to select its technology supplier for the CBDC back in May. After facing stiff competition, the contract was given to Ground X, whose Klaytn platform will host the CBDC. Ground X is a blockchain subsidiary of Korean communications giant Kakao.

“Samsung Electronics has recently decided to participate in the BOK-led CBDC pilot project, under which interested parties will research the practicalities of the CBDC in a test environment,” an executive familiar with the issue commented.

BOK and Samsung officials said the project was based on the benefits of a CBDC that include more efficient and advanced payments systems and financial inclusion. Samsung is hoping to test the possible usability of blockchain-based systems on its Galaxy mobile lineup.

“Specifically, the Kakao consortium and Samsung Group’s two tech affiliates will launch a pilot program aimed at checking on money transfers and remittances between countries, issuing and distributing the CBDC and monitoring how that eventually works in virtual environments,” the executive said.

Because the BOK’s efforts are aimed at preparing for adjustments in the payment settlement system, Samsung Electronics plans to test the functionality of the digital currency with its Galaxy smartphone.

“Will it be possible to conduct payments via mobile phones using the digital currency with no internet availability, or to send CBDC remittances to other mobile phones or to other connected bank accounts, are the two core points that Samsung is looking at,” said an official.

Samsung SDS, the group’s IT unit, will play some role for the program. Its affiliate, Escor, will handle the procedures for the experiments with the CBDC. Central banks in developed countries have been showing keen interest in the development of a CBDC, with China’s digital yuan (E-CNY) being the closest to showing visible results.

BOK Governor Lee Ju-yeol downplayed the significance of crypto-assets, as all types of cryptocurrencies aren’t positioned to be valued properly, due to their essential, volatile nature.

But despite his negative stance toward them, he has opened up to the possibility of studying a CBDC and to contemplating why it matters in terms of modernizing financial systems. Because “stablecoins” have become more popular, some observers believe that central banks need to provide alternatives. The BOK will operate its simulation programs regarding the efficacy of the CBDC in two stages.

The BOK plans to use Klaytn, Ground X’s blockchain platform, as the main platform for its CBDC structure.

The first phase of the pilot will run until December and will assess the suitability of the technology. Phase two, which is expected to run from January through to next June, will assess the practicalities of the Bank of Korea expanding its banking practices to incorporate the CBDC.

Samsung has been integrating cryptocurrency into its smartphone hardware since 2019. The launch of the S10, with its built-in cryptocurrency wallet, was followed in 2020 by the S20 range, which expanded on the integrated blockchain functionality with the Blockchain Keystore—a feature that enables users to store the private keys to their crypto wallets safely on their devices.

If the pilot is successful, South Korea will be one of the first countries to offer a CBDC alternative to services like Apple Pay and Google Pay, which enable contactless phone payments without the need for an internet connection.