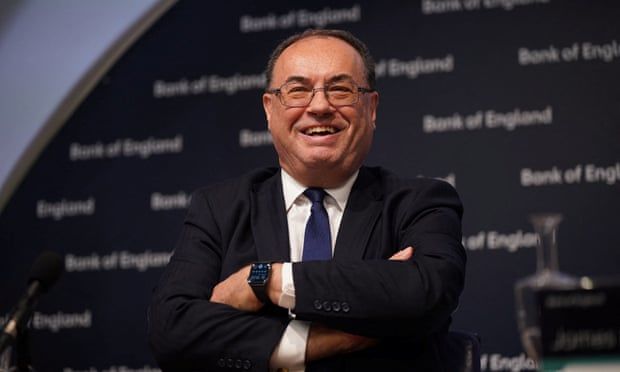 Bank of England under fire over £23m bonus payouts

Anger as thousands of Bank staff enjoy ‘performance awards’ when governor had urged other British workers not to demand big rises
The Bank of England, which has been criticised for underestimating the threat of rising inflation, last year paid out bonuses to its staff amounting to more than £23m, the Observer can reveal.

This bonus pot was at its highest level for at least two years, with more than 4,260 employees receiving performance awards. Andrew Bailey, the bank’s governor, was widely criticised earlier this year after telling Britain’s workers that they should not be asking for big pay rises because inflation had to be kept under control.

The bank is tasked by the government with hitting an inflation target of 2%, but the current rate stands at 9.4%. Lord Sikka, emeritus professor of accounting at Sheffield University, said: “Bonuses should only be paid for extraordinary performance, but there is no evidence the bank has delivered even an ordinary performance. They are unjustified.”

All employees at the bank, with the exception of Bailey, who was appointed in March 2020, are eligible for a discretionary annual performance award. Bank officials say the vast majority of its employees do not work on monetary policy.

Figures disclosed to the Observer under freedom of information laws show that 34 members of staff were given awards of between £15,000 and £20,000.

Bank officials say the discretionary award budget has been 10% of the total salary bill in the past two financial years, but the number of its employees has increased. Average payouts per person fell from £5,560 in 2020/21 to £5,471 in 2021/22.

The bank has been criticised by MPs over its handling of inflation. Former Tory Treasury minister Robert Jenrick told the Financial Times in May: “The BoE missed the opportunity to gain control over inflation last year, arguing that it would be modest and transitory when it was clear to many of us that it would be high and longstanding.

“We are now in danger of entering a new inflationary era. Having acted too little, too late, there is a risk of overcompensation if it pursues significant further interest rate raises.”

Liz Truss, foreign secretary and frontrunner in the race to become the next prime minister, has said she wants to review the mandate of the Bank of England. Bailey has said it is critically important that central banks maintain their independence.