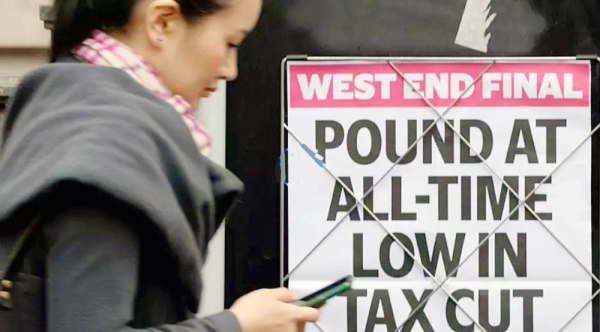 The Bank of England has stepped in to stabilize financial markets after the British government’s tax-cutting plans caused economic chaos.
In an emergency intervention, the central bank warned of a “material risk to UK financial stability” if market dysfunction continued.

It came after the IMF urged the UK government to rethink its fiscal strategy that saw the pound plummet to a record low against the US dollar this week.

On Wednesday, the Bank of England said it would buy long-dated government bonds — issued to support public spending — on “whatever scale is necessary”.

The strategy is designed to reduce interest rates on government debt.

“The purpose of these purchases will be to restore orderly market conditions,” the bank said in a statement, adding that the purchases would be underwritten by the Treasury.

The fiscal plan requires £72billion of additional government borrowing in the next six months. Following the Bank of England’s announcement on Wednesday, the pound fell further in value against the US dollar — dropping by 1.5 percent.

The latest UK fiscal plan included tax cuts for the highest earners, with their tax rate dropping to 40 percent from 45 percent, alongside a one percent cut for earners in the lowest band of income tax.

It also canceled a planned rise in corporation tax from 19 percent to 25 percent and scrapped rules that limit bankers’ bonuses.

Kwarteng, who was appointed Chancellor on Sept. 6, said he believed the budget would boost economic growth in the UK.

On Tuesday evening, the International Monetary Fund said that Britain should reconsider planned tax cuts that would “likely increase inequality”.

“The Nov. 23 budget will present an early opportunity for the UK government to consider ways to provide support that is more targeted and re-evaluate the tax measures, especially those that benefit high income earners,” the agency said.

A former deputy governor of the IMF — established in 1945 to ensure global financial stability — said it was unusual for the agency to criticize a G7 nation.

Adnan Mazarei told the BBC that such statements are “common with regard to emerging market countries with problematic policies, but not often about G7 countries”.

Keir Starmer, the leader of the UK’s left-leaning opposition party Labour, accused the Conservative government of making a “mess” of the economy.

“Quite often when the markets are jittery, when the pound falls, it’s because of some international event — conflict in Ukraine, a cost-of-living crisis, energy crisis. This is self-inflicted by the government,” Starmer told LBC radio.
Add Comment