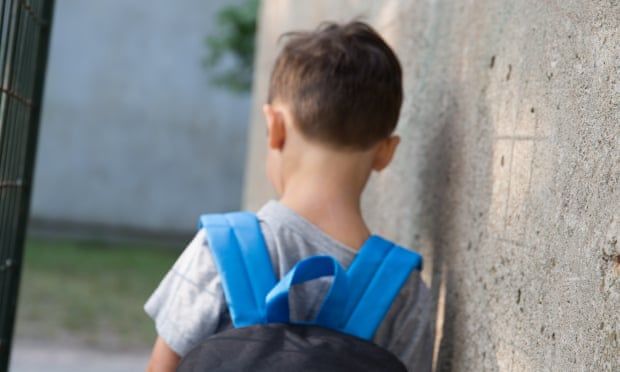 Primary schools should no longer permanently exclude pupils, and measures of wellbeing should be included alongside exam results in school league tables, according to a report by the former children’s commissioner for England.

The Commission on Young Lives, headed by Anne Longfield, argues that exclusions can be highly damaging to those affected, putting young people at risk of exploitation, serious violence and criminal activity.

The commission calls for a ban on primary school exclusions from 2026 and for greater efforts by secondary schools to reduce exclusions, with all state schools in England having to report annually on the number of children who have been excluded or moved off a school’s roll.

The report recommends that no school should receive Ofsted ratings of good or outstanding without meeting inclusion targets, while school league tables should include a pupil wellbeing measure alongside exam results.

“Look behind the headlines of the tragic deaths, acts of serious violence and criminal exploitation of our young people over recent years and so often you see a pattern of children disengaging and falling out of school and into harm,” said Longfield, who stepped down as children’s commissioner in 2021.

“Over recent years we have seen the growth of an exclusions culture that perversely rewards removing some vulnerable children from school roll. That must not continue.”

Longfield said that while exclusions did not automatically result in children becoming involved in crime or serious violence, “we have met so many school leaders, youth workers, social workers, victims and perpetrators of exploitation, parents and children who recounted how school exclusion was a trigger point,” leading to involvement in county lines, gangs or sexual exploitation.

“Five teenagers have been murdered in one London borough in the last year, and all of them killed by a teenager who had been excluded from school. Can this really be coincidental?” Longfield said. 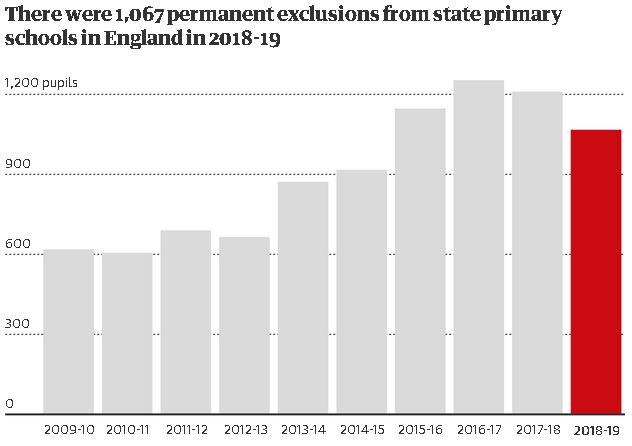 The report highlights the case of a boy suspended 17 times while in reception class. “A system that has no real accountability for a five-year-old boy being excluded 17 times in a year, or where a vulnerable teenager is out of school for months or even years, is not a system that is working for every child,” Longfield said.

Department for Education (DfE) statistics show 1,067 primary school pupils were permanently excluded in 2018-19, accounting for 0.02% of all children at state primary schools in England. In state secondary schools more than 6,700 were excluded, or 0.2% of students enrolled.

Tom Bennett, the DfE’s behaviour adviser, said: “Permanent exclusions are incredibly rare in primary school – they exclude on average once every 10 years. They are only used when absolutely necessary, to preserve the safety and learning of students. Anyone advocating otherwise, however well meaning, is inadvertently campaigning to endanger children and staff.

“Would we insist a child who has been sexually assaulted by another child should have to remain in the school with their abuser? Of course not. Nor should we expect the school community to be exposed to that threat.”

The report also recommends that the higher proportion of children from Black Caribbean backgrounds being excluded should be addressed through new guidance and curriculum content, with the DfE advised to work with school leaders and parents on the treatment of Black children over issues such as adultification.

“The recent abhorrent treatment of Child Q, a teenage girl who was left traumatised after being strip-searched at school by Met police officers while on her period, is a recent shocking example of how adultification can happen in educational settings,” the report notes.

Lucy Nethsingha, the deputy chair of the Local Government Association’s children and young people board, said councils shared the commission’s concerns and were looking to the Queen’s speech next month for new legislation.

“Councils want to work with government to make swift changes to legislation to make the education safety net more robust, for the benefit of current and future generations of young people,” Nethsinga said.

A DfE spokesperson said suspension and exclusion were “necessary and essential behaviour management tools” for schools. “Longer term, our recently published [special needs] and alternative provision green paper set out our plans to reform alternative provision, changing the culture and practice of how settings run and best support their pupils,” the DfE said.