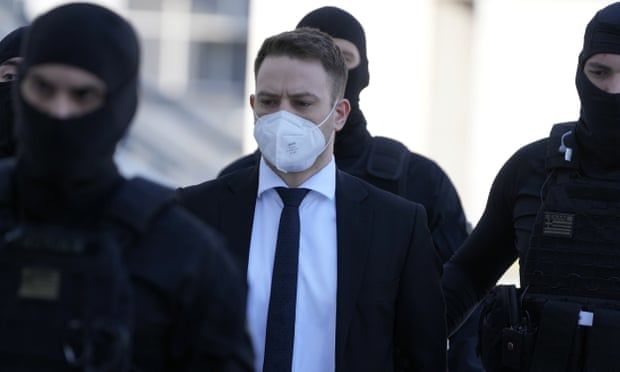 The husband of Caroline Crouch tugged at heartstrings and implicated innocent foreigners while playing the part of grieving widower
Babis Anagnostopoulos: clever; photogenic; charistmatic; successful – all traits that perhaps allowed him to think he could fool the world. On Monday the game was up.

Justice caught up with the helicopter pilot who finally admitted it was he who had suffocated his British wife, Caroline Crouch, just over a year ago. And justice was unsparing. At the end of a dramatic trial, whose every twist and turn had gripped Greece, a mixed court of jurors and judges unanimously agreed that the 34-year-old should receive the toughest penalty possible under Greek law: a life sentence for the premeditated murder of his partner; a jail term of 11 years and six months for the brutal killing of the family’s pet dog; and a fine of €21,000.

Anagnostopoulos, who for almost six weeks had sought to pin the murder in the couple’s dream Athenian home on a gang of ruthless foreign thieves, will likely remain behind bars for several decades. After sentencing was passed, even his lawyer appeared to justify the judgment, saying the verdict was “expected”.

But in truth, the story of Crouch’s death has made waves precisely because it confounded expectation. At barely 20, the young mother’s tragic end struck a chord at a time when the Mediterranean nation has also been hit by a wave of femicides.

When the UK-trained pilot emerged dishevelled and distraught from the very building in suburban Athens where Caroline had taken her last breath – telling reporters he hoped no family would endure the same fate that his had been forced to bear – there was no one in Greece, or abroad, who did not sympathise.

Against a backdrop of rising crime in the capital’s suburbs, a visibly shocked civil protection minister announced a €300,000 bounty to help unearth the culprits.

As the weeks passed, with no evident breakthroughs, the story intensified – along with the public’s interest. In the role of grieving widow, Anagnostopoulos pandered to Greek fears: he wasn’t sure where the thieves were from, but he was convinced they were foreigners. Potential suspects were pulled out of police line-ups with the aviator deliberately suggesting Georgians or Albanians were behind the murder.

Other props would be used to maintain the fiction that he was a loving family man who had fallen victim to heinous crime. Attending Crouch’s funeral, he mourned by the side of her grave, clutching the couple’s baby daughter, Lydia, for more than four hours.

Weeks later, when it became clear that the doting father had in fact been the perpetrator who had placed the 11-month-old child next to her dead mother’s body, the backlash was instant. Following his shock confession, sympathy turned into shock and then revulsion.

Across the country, Greeks felt hoodwinked, not only by Anagnostopoulos’ lies and hypocrisy, but by the knowledge that, like the police, they had been fooled by a consummate actor who had played on their deepest fears.
Add Comment