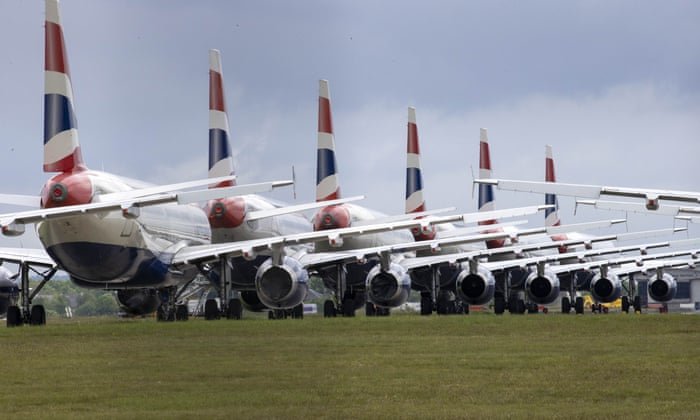 Unite accuses airline of using coronavirus crisis as cover for betraying its workforce
The Unite union has claimed that British Airways plans to fire the vast majority of its workforce and rehire them on reduced pay and worse terms.

BA informed unions last month that it was holding a consultation on as many as 12,000 job cuts. The notice under section 188 of the Trade Union Act means workers could be made redundant as soon as 15 June.

Relations between the company’s owner, International Airlines Group, and the unions have broken down. BA’s boss, Alex Cruz, wrote a letter to staff on Friday criticising the Unite and the GMB unions for failing to attend consultation meetings to discuss the plans. Balpa, the pilots’ union, had engaged in consultations, the airline said.

The unions say they are unable to negotiate with the airline on major job cuts and changes to working conditions while workers are furloughed, as meetings of large groups of people are difficult.

Both Unite and GMB are understood to be considering legal action against BA on the basis that a meaningful consultation is impossible during lockdown.

Unite’s general secretary, Len McCluskey said: “We cannot tolerate BA using this crisis as cover to impose a long-term plan to slash jobs, pay and conditions. No other employer has threatened to effectively fire and rehire its entire workforce. Over 40,000 loyal BA staff now face the prospect of losing either their livelihoods or potentially being re-interviewed for their own jobs on vastly reduced terms and conditions.

“If the proposals were about dealing with the Covid crisis, why is the company threatening to terminate contracts, including eliminating disciplinary procedures? This will not help the company get through Covid-19. This is nothing more than a cynical act of corporate greed and a betrayal of the BA workforce and Britain.”

McCluskey has written to the IAG board demanding it withdraw the section 188 notice, which the union argues would give more time for meaningful negotiations.

The airline says the job cuts are necessary because of the prospect of lower demand for flights for years to come.

A BA spokeswoman said: “We are acting now to protect as many jobs possible. The airline industry is facing the deepest structural change in its history, as well as facing a severely weakened global economy. We are committed to consulting openly with our unions and our people as we prepare for a new future.”