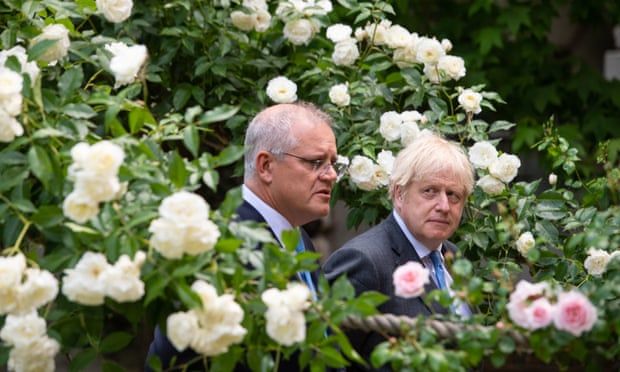 Australia has shown how quickly the right can crumble. Boris Johnson, be warned

The ousting of shameless culture warrior Scott Morrison should send a shiver down Tory spines, says Guardian columnist Gaby Hinsliff
Populists can be beaten. There was a time not long ago when few could type that sentence with confidence, so the outcome of Australia’s recent elections will leave many progressives battling with the still unfamiliar sensation of victory.

Scott Morrison, the now ousted rightwing prime minister dubbed Australia’s first “post-truth” leader, was never quite a Trumpian. But he was a shameless culture warrior presiding over a bungled Covid response and ensuing recession, plus a clumsy response to high-profile sexual misconduct allegations against parliamentary colleagues. He dragged his feet on the climate crisis even as apocalyptic floods, fires and droughts were convincing Australians that something had to change, and holidayed in Hawaii as wildfires raged at home. His opponent, Labor’s Anthony Albanese, was not exactly overburdened with charisma and the progressive vote eventually split between Labor, the Greens and the so-called teal independents, an exasperated army of mainly female candidates pledging to clean up politics and tackle the climate. But the cautious Albanese and his mantra of “safe change” – nothing too big or scarily radical – still made it over the line, having seemingly learned from a previous Labor defeat blamed on an over-ambitious manifesto. If any of this sounds uncannily familiar to British readers, then it’s easy to see why Keir Starmer’s Labour party (and indeed the Greens) might suddenly have their tails up.

First Donald Trump, then Marine Le Pen in the French presidential elections, now Morrison. This toppling of rightwing dominoes creates the sense of momentum British progressives have been missing. Now there are successful campaign architects to learn from overseas, and new ideas being road-tested in government; there will be friends in strategic places, perhaps new energy behind global efforts to combat the climate crisis, and the morale-boosting idea that the zeitgeist might finally be with them. You can almost feel the pendulum swinging away from a polarising and ultimately grubby era back towards a politics at least vaguely connected to truth and reality. Or at least you can if you want to badly enough.

For a more cynical way of looking at this is that two years in, Biden’s ratings have sunk far enough to give Republicans plenty of hope for next time; Le Pen still got way too many votes for comfort; Albanese’s victory was not thumping; and Britain’s first-past-the-post system makes similar Green breakthroughs or progressive alliances harder here. Nor is Australia, which shifted rightwards in 1996 just as Britain was doing the reverse, historically a very reliable political weathervane.

All that said, what should send a shiver down Tory spines is that Morrison’s aggressively divisive approach to issues such as immigration and his pursuit of socially conservative Labor voters seemingly cost his party dear in its wealthier, more metropolitan former heartlands. The nagging fear some Conservatives have that a diet of sleaze, culture wars and threats to tear up the Brexit deal will only lose them Tory votes in Worthing or Surrey has just played out on a big screen Down Under, producing roughly the kind of electoral realignment they fear.

What makes this otherwise faraway election feel closer to home is that the Australian right’s thinking remains core to Boris Johnson’s project. Priti Patel’s plan to export asylum seekers to Rwanda mirrors an Australian scheme to send refugees to Papua New Guinea, and she recently hired the man who negotiated that deal to lead a review of Britain’s Border Force. Lynton Crosby, the 65-year-old Australian campaigns guru who enjoys near-legendary status in the Conservative party, doesn’t personally run campaigns any more but he still takes the odd phone call; his protege Isaac Levido ran Johnson’s successful 2019 campaign, months after helping deliver a surprise victory for Morrison. David Canzini, the new deputy chief of staff installed at Downing Street to restore order post-Partygate, has also worked closely with Crosby. Interestingly the same questions asked in recent years about Crosby’s companies and their past relationships with the fossil fuel industry are now being asked in Whitehall, as the government wrestles with what to do about soaring gas bills.

The Treasury is visibly warming to the idea of a windfall tax on oil and gas companies, just so long as it doesn’t look like Labour’s windfall tax plan. But reports that Downing Street considers such a move “un-Conservative” have set rumours swirling. Johnson has never noticeably cared whether something is or isn’t conservative, if it’s popular. But Canzini cares. He is close to the pro-Brexit, low-tax, strongly ideological Tory right in Britain, some of whom also happen to be hostile to the net-zero agenda and may prefer to see fuel bills cut by scrapping green taxes (which fund the development of renewable energies in the longer term) than introducing new taxes.

The outcome of all this wrangling obviously matters most to people who can’t pay their heating bills, but it’s a litmus test of Downing Street’s intentions too. If the windfall tax doesn’t happen some may begin to wonder – as an unnamed MP suggested recently to the Times – about the government’s commitment to ban the installation of new gas boilers by 2035. Does Johnson really want to go into an election arguing with outraged pensioners who can’t afford to replace their central heating? Or is this bold climate policy too at risk of being deemed a “barnacle on the boat”, that famous Crosby shorthand for anything that creates unnecessary friction or muddies the message?

Contrary to popular belief, Crosby disciples don’t just blindly run the same hard-right campaign every time. Instead his hallmark is clarity, or the disciplined repetition of one key message carefully tailored to electoral circumstances, excluding everything else. That was as true of the London mayoral campaign he ran, pitching Johnson as a cuddly liberal, as of Levido’s tub-thumping “Get Brexit Done” campaign. But campaigns are ultimately just strategies for helping a party survive in office; they’re not necessarily about providing what a country actually needs. What’s interesting about Australia is that voters seem to have been pragmatically focused on the latter.

Morrison was found wanting in thoroughly practical ways by climate emergencies and Covid. Some of Le Pen’s wilder ideas about tackling the cost of living crisis fell apart under scrutiny. Donald Trump did not make America great again. Simple answers to complex problems appeal, but they don’t actually work, and when that becomes painfully obvious – whether because wildfire smoke is choking your Melbourne suburb, or because your export business is collapsing thanks to Brexit – then populists become vulnerable. Perhaps the most useful lesson to take from Australia is that bad politics can still melt on contact with inconvenient truths. That feeling you vaguely recognise, but can’t quite put a finger on? That would be hope.
#Boris Johnson  #Donald Trump  #Priti Patel  #Johnson  #Covid
Add Comment