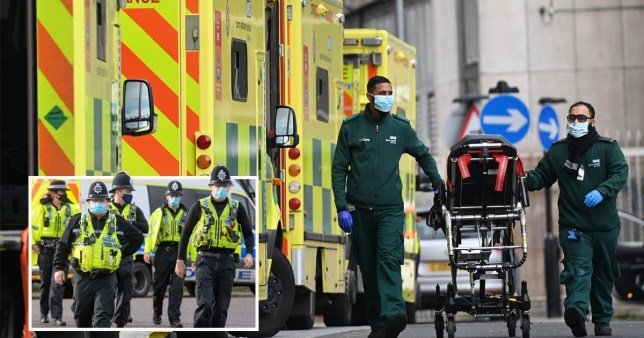 The Crown Prosecution Service (CPS) said it charged 1,688 such offences between April 1 and September 30 2020 in England and Wales.

Many of these involved police officers being ‘coughed and spat on’ and others being ‘kicked, bitten and hit with heavy objects’, the CPS said.

‘I will continue to do everything in my power to protect those who so selflessly keep us safe during this crisis,’ he said.

Police are calling for tougher sentences for those who spit or cough at officers.

The Police Federation of England and Wales (PFEW) said victims of these crimes are feeling ‘let down by the criminal justice system’.

National chair John Apter said the ‘disgusting, dangerous and inhumane’ assaults on police officers were on the rise.

‘This stark increase in coronavirus-related crime may shock decent members of society but will not come as any real surprise to colleagues,’ he said.

‘Police officers on the frontline are increasingly facing abuse from a small minority who think nothing of deliberately weaponising the virus, and these people are the lowest of the low.’ 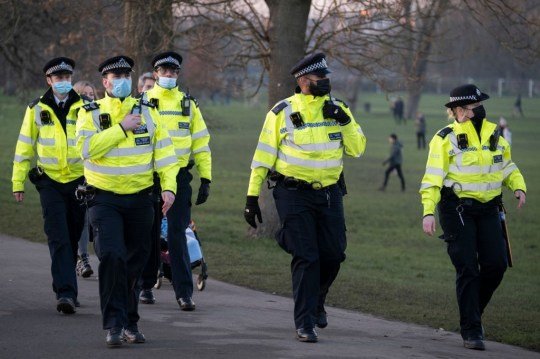 Attacks on police officers are on the rise

Mr Apter said anyone found guilty of assaulting an emergency worker should face jail time, adding that many attacks have led to police officers coming down with Covid-19.

He said: ‘The frustration we have in dealing with these individuals involves sentencing, as it’s inconsistent and often leaves victims feeling completely let down by the criminal justice system.

‘Those who commit these attacks must spend time in prison, as without this there is no deterrent and emergency workers will continue to feel let down by the criminal justice system.

‘We have recently seen examples of Covid being transmitted to colleagues through these attacks.

‘When someone knowingly has the virus, or believes they have it and then wilfully coughs or spits at a police officer, we need the CPS to consider a much more serious charge than the ‘Assaults on emergency workers’ category.’

‘Without this, these types of attacks will continue to rise.’

Some 1,137 charges were handed out for breaking coronavirus laws, including a man caught travelling between counties in Wales to solicit the services of a sex worker and another who claimed 15 people having a party at his house in Manchester were part of his support bubble.

Other crimes flagged as being ‘coronavirus-related’ included public order offences, criminal damage and common assault. Flouting coronavirus rules was regarded as an ‘aggravating feature’ of the crimes during sentencing.

Overall, 2,106 defendants were prosecuted for 6,469 coronavirus-related offences, with a conviction rate of 90%, according to the CPS.

The figures were released as Home Secretary Priti Patel chaired a Downing Street press conference during which she announced a new £800 fine for people who attend house parties. 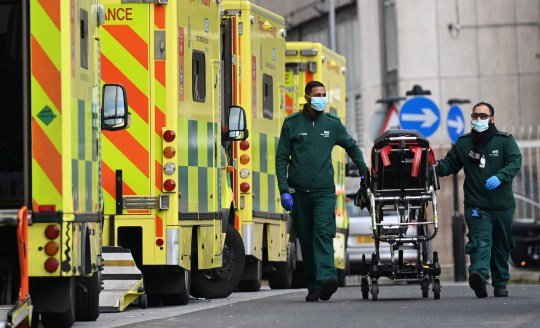 Assaults on emergency workers are most common Covid-related crime

Chair of the National Police Chiefs’ Council (NPCC) Martin Hewitt welcomed the measure and went on to describe a number of large parties officers had been forced to break up during the pandemic.

Officers were injured in a number of the examples he gave, while in one incident, in Bournemouth, he described one of them going on to test positive for Covid.

Appearing alongside Ms Patel at Downing Street Mr Hewitt said: ‘While that infection can’t be directly linked to that event, I think what it does do is put in perspective the dangerous nature of policing. Even with the adequate PPE that we provide to our staff, this is risky.’

He added: ‘These are just a few examples, where our officers are not only exposing themselves to the risks of Covid, but in some cases are also facing abuse and physical assault from those who are willfully breaching the regulations and endangering all of those present.’