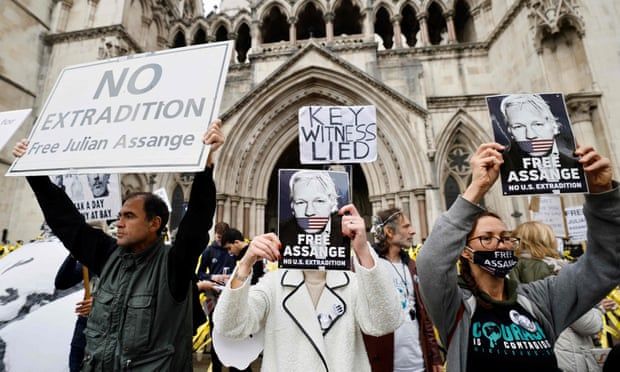 US seeking to overturn ruling that WikiLeaks founder could not be extradited because of suicide risk
Lawyers for Julian Assange have cited new allegations that the CIA plotted to kidnap or kill him as “grounds for fearing what will be done to him” if he is extradited to the US to face espionage charges.

The WikiLeaks founder’s legal team also described diplomatic assurances given by US authorities in an effort to overturn a ruling earlier this year against his extradition as meaningless, and not enough to overcome concerns about his risk of suicide were he to be sent to the US.

On the first day of an appeal against the ruling on Wednesday, a lawyer for the US said authorities had promised that Assange would not be held before trial in a top-security “supermax” prison and could also serve a sentence in his native Australia if convicted.

Edward Fitzgerald QC, for Assange, said his client was too mentally ill to be extradited, that the US assurances did not remove the risk of him being detained in extreme isolation in the long term, and the risk of suicide remained substantial.

Assange would be put into isolation on arrival in the US, he said. “This is not some distant fact. This is going to happen as soon as he arrives in America.”

Assange is being held in Belmarsh Prison and appeared only by video link on the first day of the two-day hearing.

Lawyers for the US authorities hope to overturn a January ruling by a district judge, Vanessa Baraitser, that Assange could not be extradited, which cited a real and “oppressive” risk of suicide.

They contend Baraitser was misled by a psychiatrist who testified about Assange’s fragile mental state but did not include the fact that he had fathered two children in the UK.

In written legal argument, Assange’s lawyers said there were “unique and special reasons” that led to Prof Michael Kopelman’s understandable caution about the identification of Stella Moris as Assange’s partner.

This arose from claims, aired during proceedings last year, about a plan to poison or kidnap Assange from the Ecuadorian embassy and even steal a nappy from one of his sons to gather DNA.

Recent reports after an investigation by Yahoo News that CIA officials had discussed plans to harm Assange also justified Kopelman’s claims, according to Assange’s team.

“There are great grounds for fearing what will be done to him given the revelations of surveillance in the embassy and plots to kill him,” Fitzgerald told the court.

Prosecutors in the US have indicted Assange on 17 espionage charges and one charge of computer misuse over WikiLeaks’ publication of thousands of leaked military and diplomatic documents. They carry a maximum sentence of 175 years in prison.

A lawyer for the US said on Wednesday, however, that the sentence could be much shorter. The longest sentence given for equivalent offending had been 63 months, Jame Lewis said.
Add Comment