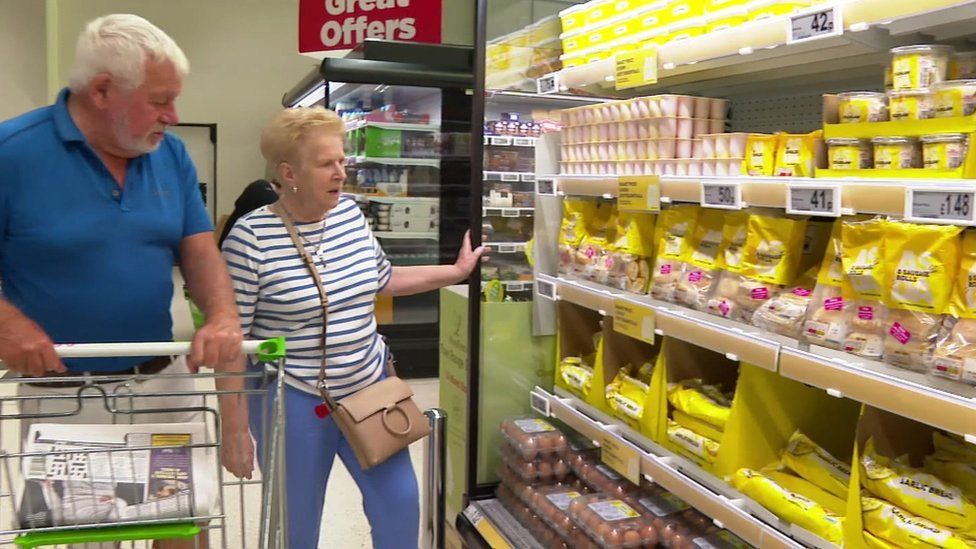 Some Asda shoppers are setting £30 limits at checkouts and petrol pumps, the supermarket's chairman has said.

Customers are putting less in their baskets, switching to budget ranges and are worried about the future, said Lord Stuart Rose.

"What we're seeing is a massive change in behaviour," he told the BBC.

It comes after food and fuel costs soared in the UK. Inflation - the rate at which prices rise - reached a 40-year high of 9% in April.

Lord Rose said he saw the inflation rise coming last year like a "train coming through a tunnel with a big flashing light on the top". Now it's time to "fasten our seatbelts", he said.

"People are trading back. They are worried about spending," he said. "They've got a limit that they've set out, too. They say £30 is one limit... and if they get to more than £30 then that's it, stop. It's the same with petrol."

Lord Rose said the country was facing some very tough times and urged the government to do more to help low income households.

But the Treasury said it understood people were struggling with rising prices and it was making cost of living payments of £1,200 to those on the lowest incomes.

The retail veteran has some 50 years of industry experience under his belt. He remembers the runaway inflation of the 1970s and said this bout of rising prices has come as a very nasty surprise for consumers.

"I'm of the generation that remembers what it was like last time. And once [inflation] gets hold, it's quite pernicious," he said.

"And it takes a long time to eradicate... We're in danger of being in a place that it's very difficult to extricate ourselves from.

"What's rather sad is that the country, the government, perhaps the Bank of England didn't see inflation coming quickly. They've now recognised that."

Asda has been tracking disposable income since the financial crisis in 2008 and is all too aware of the squeeze on consumers.

Its latest data shows households had, on average, £44 less a week in discretionary income in May compared with a year ago - a fall of nearly 18%. This is the amount of money left over after taxes and essential bills have been deducted and it is the third month in a row where disposable incomes have dropped to record levels. 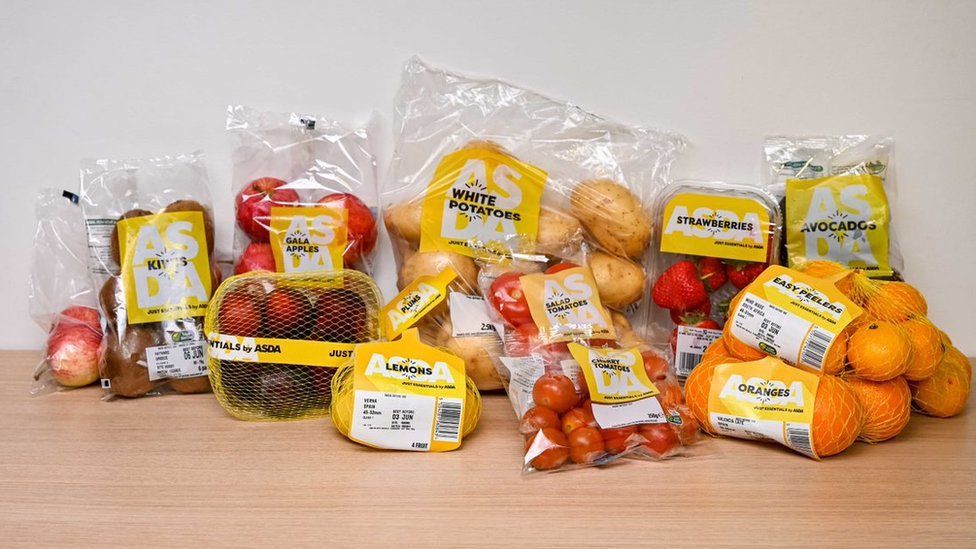 Like other supermarkets, Asda is having to grapple with its own soaring costs and decide how much of this to absorb and how much to pass on to shoppers.

All the big grocers are in a battle to keep prices as low as possible on the most popular everyday items because they know customers will vote with their feet and shop around.

The UK's third biggest grocer has expanded its cut price groceries with a new range, Just Essentials, covering some 300 products.

It has also launched Dropped and Locked, an initiative to lower prices on 100 items and keep them at the same price for the rest of the year.

"We're doing everything we can. We've invested nearly £100m in the last month or so making sure customers get essentials at very, very attractive prices to try and help them," said Lord Rose.

But will it be enough? Asda has recently been performing less well than its rivals.

Lord Rose said he was not too worried about market share in the short and medium term.

"It goes up a bit, and down a bit, you'll see the monthly changes and that's always been the case in retail... We will do what we need to do to look after our customers," he said.

"Secondly, because we've had a change of ownership - my colleagues and I only took over the business a year ago - we're doing things which we think will affect the long term of the business which will give customers a better Asda."

The Asda chairman and former M&S boss said he did not want to predict where food prices will get to by the end of the year but would like to see more government support for those most in need.

"I would urge them to do more for those people at the bottom end of the earnings income scale," he said. He suggested a VAT reduction or another reduction in fuel tax would be "helpful".

He acknowledged the government now has a difficult balancing act between tackling rising prices without scuppering economic growth. But he knows what he would do.

"I would say the most important priority in the short term is to kill inflation, because once inflation gets embedded, it's very, very hard to kill. If it means we have to slow the economy down for a while, and it looks as if we are heading for a recession, then so be it."

A government spokesperson said its £37bn support package meant it would deliver a tax cut in July to save the typical employee more than £330 a year.

It said people on Universal Credit would keep £1,000 more of what they earn and a 5p cut on fuel duty would save a typical family £100.