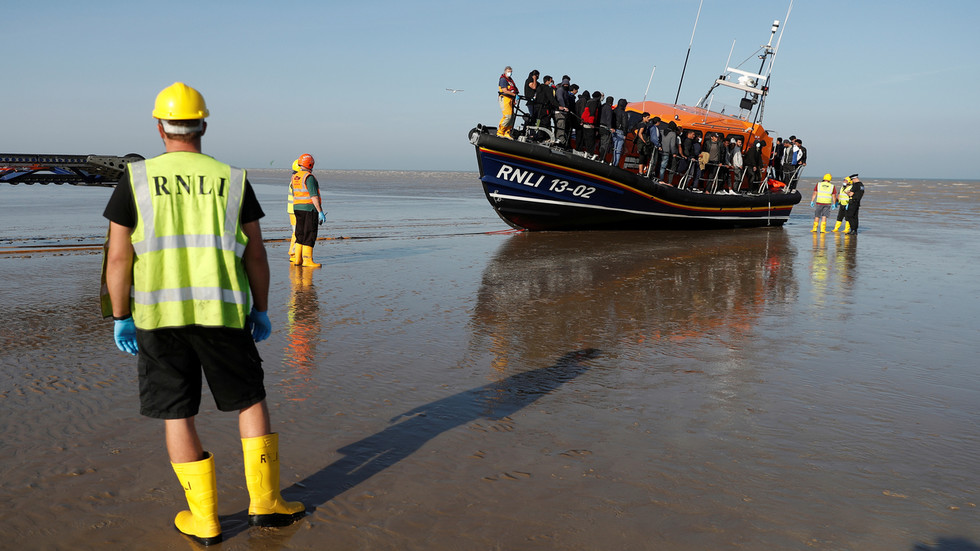 As migrant bodies pile up, the UK & France have no right to lecture Poland & Belarus

Migrants are still crossing the Channel in huge numbers – and dying too, with five fatalities in the past fortnight alone. No one seems to be taking this crisis seriously, with the media distracted by events in Eastern Europe.
This year, nearly 23,000 illegal migrants have made the 21-mile journey across the English Channel. By the end of the year, that number could hit a massive 30,000. In the past two days alone, nearly 1,200 migrants navigated their way across what is the busiest shipping lane in the world, taking the number who have successfully made the journey to 3,000 this month alone.

Yet, bizarrely, what has been going on has been largely ignored by the UK media, which is appalling. There has been wall-to-wall coverage of the migrant crisis on the Poland-Belarus border, but it seems our very own migrant crisis is either taboo, or not worthy of reporting. Either way, it’s wrong, because I would argue that this is the most pressing issue that the UK faces at the moment.

I warned back in September that if the French and UK governments did not get a grip on the situation, bodies would start being washed up on beaches, and unfortunately it seems this prediction is coming true. The Channel is becoming choppier and the temperature, in both the air and the water, is dropping.

In the past fortnight, at least five people have died attempting to make the perilous crossing – and they are only the ones we know about. It is clear more will wash up in the near future if the French do not deploy extra resources to ensure that migrants do not enter the water.

On Tuesday alone, there were incidents where British patrols saved migrants either from going overboard or rescued them from the water. One frustrated UK Home Office “insider” claimed that the French “don’t give a s**t about the growing death toll.”

And to add insult to injury, the UK government has offered to pay a whopping £54 million to France to increase patrols on the coast and prevent the migrants making the perilous journey. Indeed, a UK government source has said that the French have “serious questions to answer.”

Is what the French are doing really any different to what the Belarusian government is being accused of? They are, after all, allowing the migrants to make their way across France to the coast, in the knowledge that their final destination is the UK. Moreover, when the migrants do reach the French coast, the authorities are clearly not doing enough to prevent them from leaving their shores.

Regardless of France’s rather laissez faire attitude, the UK is also culpable. The migrants are making the journey safe in the knowledge that once they arrive they do not have to worry about deportation. Indeed, according to reports, no illegal migrant who has made their way across the English Channel this year has been removed. And why is that? Well, it’s because human rights lawyers are on hand to ensure that they can tie the government in knots through obfuscation and endless appeals.

The only way to deal with this situation is through tough love and sending a clear message that the UK is not a soft touch. Indeed, UK Justice Secretary Domonic Raab has promised that the government is looking at ways of tweaking the Human Rights Act to put paid to this farce. However, there is, as I have argued previously, a far simpler way of dealing with this issue and that is to withdraw from the European Convention of Human Rights and its Strasbourg court.

Regardless of the Human Rights Act, the British government is also to blame, as it has allowed the message to get out to would-be migrants that the UK is the land of milk and honey. Indeed, who wouldn’t want to get to the UK when there is a four-star hotel waiting, a free bed, free healthcare, and nearly £40 a week to spend? And the victim is the British taxpayer, who is going to be forced to fork out up to £70 million to pay for the hotel accommodation.

This whole situation is making both France and the UK a laughing-stock. Plus, how can either country lecture Poland, or indeed any other country, about migrant issues when they are behaving in this manner?

Both France and the UK have lost the moral high ground, as it seems the migrants are being used as pawns in a larger political game. Indeed, it is clear for all to see that the migrants are caught up in the wider Anglo-French dispute regarding fishing rights and Brexit, and neither side wants to be seen to give way. Again, is this really any different to what is going on between Poland and Belarus? I’m not so sure.

And finally, what about next year? If we consider that 8,410 migrants came across the English Channel in 2020, and the number could be up to 30,000 this year, that is an increase of two-thirds. If we continue on the same trajectory, there could be anything up to 90,000 attempting to make the crossing, and then the bodies really will be piling up.

This issue needs sorting, and sorting now. The migrants need to know that if you come to the UK illegally via this route then you will be swiftly deported. In the meantime, the French must up their game and stop playing politics with the lives of the migrants.
#Raab
Add Comment