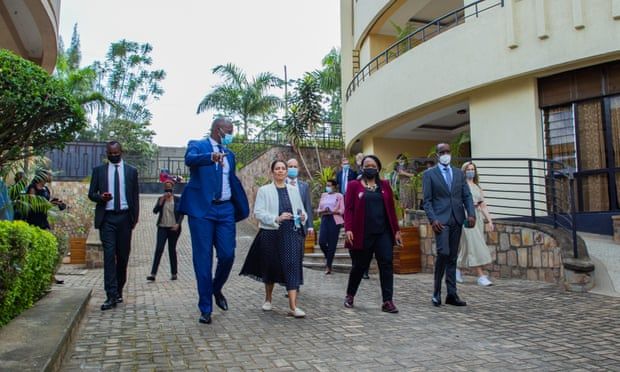 As a Rwandan, I see what’s missing from the asylum debate: the voices of refugees themselves

Rwanda has a long tradition of hospitality. But many asylum seekers view this British plan with suspicion
In the aftermath of genocide, Rwanda turned to tradition to help rebuild the country. There is a saying: turi bene mugabo umwe Gihanga – we all have the same father. Hospitality is part and parcel of this custom, a natural reflex of living together rather than an obligation. Sasa bugari, another saying goes, or widen your bed and always make room for the unknown traveller who may seek hospitality at any time. In the shack where we landed after being exiled, my mother immediately set about weaving two mats for any unexpected guests who may drop in, certain of a warm welcome.

My father, too, would be up at cock’s crow, before dawn, and off into the savannah in search of more fertile earth on which to grow the next crop. Come nightfall, seeing smoke above a banana plantation, he knew he could simply lay down his staff outside a hut and call out “Yemwe abaha” (hey folks) to be received with all the respect and discretion that was due to a traveller. Early the next day he would set off again, secure in the knowledge that when the sun set behind the hills a woman somewhere would have prepared a welcome mat for the passing traveller.

As Rwanda rises again from the ashes of the genocide against the Tutsi, many of those now governing the country endured exile, just as I did. There must have been Rwandan refugees almost all over the world. So how can we disregard all those who are suffering the same lot? We too have a long experience of exile. We cannot forget the misery we endured, so it seems only human nature to reach out to those who are now in the same situation.

In taking in refugees and asylum seekers who are otherwise bound for Britain, is Rwanda looking for some form of reparation? Is rescuing others from exile a way of proving to itself that its own exile is over? Will welcoming outcasts help heal its own wounds?

Rwanda has so far accommodated 130,000 refugees, mostly from neighbouring countries – the Democratic Republic of the Congo and Burundi – but also Libyan evacuees and even a class from a girls’ secondary school in Afghanistan. The country is also versed in international cooperation under the aegis of the United Nations. International bodies have called in its army, reputed for its effectiveness and discipline, to serve in Darfur, Central African Republic and Mozambique. But the same organisations are in some doubt about the plan hatched by Britain and Rwanda.

I followed the speech by Vincent Biruta, Rwanda’s minister of foreign affairs and international cooperation. Why, he asked, shouldn’t we try to relieve suffering? Perhaps we should also see this move as an attempt by Rwanda to show that African countries, repeatedly dismissed as among the world’s poorest, can in fact do their bit for migrants and even provide assistance to one of the world’s most prosperous nations. By some strange irony of history, Rwanda will, in June, be hosting the Commonwealth heads of government meeting, a relic of a defunct empire.

I am not only a Rwandan writer, but also a social worker. In my work, I have heard what migrants have to say on the subject. Where I live in France, near to the port of Ouistreham on the Normandy coast, ferries depart daily for Portsmouth. Migrants hang around here in the faint hope of getting on board. Recently, I was guided through the port by Laetitia Jeanne, a young volunteer who helps migrants, day after day, with the endless hassles they face.

Their responses (I have changed their names) differ depending on which continent they come from. African youths tend to think highly of Rwanda, with its image as a startup nation open to all forms of initiative. This view is borne out by African students I’ve met. So, as some will say, why not Rwanda? Ibrahim, from Sudan, told me that if he had to choose between Sudan and Rwanda, he’d opt for the latter. “But I object to people being forced to go to Rwanda instead of the country they choose, risking their lives in the process. We also need to be sure of the guarantees for those who agree to go there. Many people might prefer that option to risking their lives at sea.”

The Afghan migrants I spoke with did not see things this way at all, convinced that the partnership is a trap, a roundabout way of sending them back home. “What are we going to do in this impoverished country?” they asked. In England they have reached the end of their journey. Ali, from Afghanistan, told me he thought Britain’s plan was “contrary to the right of asylum”.

“An asylum seeker is someone who gives up one life and decides to go to another country to start a new life. Now they’re going to be deported to another country where they don’t want to live. Of course, in abstract terms, the idea of asylum is to look for a safe place and Rwanda is safe now, but it’s not somewhere to make your dreams come true.”

Ahmed, who was also from Afghanistan, told me that a friend recently called him from England. “Lots of people have gone into hiding [there] rather than go to Rwanda. They’re 100% certain their application for asylum will be rejected and they’ll have to go back to Afghanistan. They can’t understand why this country [has been chosen]. There’s nothing nearby. It’s a miserable place. They didn’t go to all this trouble to make a life exiled in a country they didn’t choose.”

So will people like Ibraham, Ali and Ahmed be given a choice? They too should have a say over their futures.
#Afghanistan
Add Comment