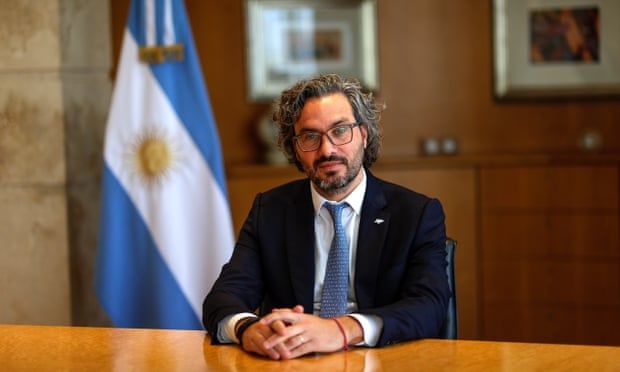 Argentina criticises UK refusal to talk about future of Falklands

Foreign minister calls for improvement in bilateral relations 40 years after conflict
British-Argentine relations will be stifled so long as the UK refuses to engage in discussions about the future sovereignty of the Falkland Islands, or if both sides continue to act as if the war happened only yesterday, the Argentine foreign minister has said.

Writing in the Guardian on the 40th anniversary of the Argentine invasion of the islands in April 1982, Santiago Cafiero called for an improvement in bilateral relations.

In an important statement of the Argentine coalition government’s thinking on the islands, he said the UK’s treatment of Argentina at times resembled that handed out to a country in breach of basic human rights norms rather than a nation that has been a democracy for 40 years.

He writes: “We believe that no outcome of any war can resolve a dispute recognised by the international community. This would set a dangerous precedent. The 1982 conflict did not alter the nature of the dispute between both countries, which is still pending negotiation and resolution.”

The foreign secretary also points out that before the Argentine dictatorship’s surprise invasion, there had for 16 years been negotiations over the substance of the sovereignty of the islands that took into account the interests of the islands’ inhabitants.

Pretending that the dispute does not exist or that it does not create obstacles in our bilateral relationship is “naive”, he says.

He insists “the two governments share fundamental values and a vision of a rules-based world order. And yet, in the South Atlantic agenda, we behave as if the conflict had taken place just yesterday.”

The Argentine invasion caught Whitehall and British intelligence wholly by surprise, leading to a panicked and finely balanced debate within the cabinet about the feasibility of sending a taskforce to free the islands, which the Argentine junta thought Margaret Thatcher did not have the resources, resolve and diplomatic support to do.

Contemporary Argentina is a threat to no one, the foreign minister writes, and points out that the pursuit of the historical sovereignty claim in the national constitution is conditional on it being pursued peacefully.

“Despite this, the UK maintains a major military base in the South Atlantic, carries out periodic military exercises in the disputed area and maintains restrictions on the sale of dual-use military materials to Argentina,” he writes. He says that these kind of restrictions are reserved usually for countries responsible for serious human rights violations, and finds it “incomprehensible” that such treatment is given to Argentina.

He says his government has presented proposals that would be beneficial, such as the re-establishment of regular flights between the Falklands and Argentina. “More flights mean more trade, more tourism and more dialogue, as we have had in the past,” he says, but so far there has been no clear response from the UK to a request to reopen flights.

He also points to the great progress by veterans, islanders and the International Committee of the Red Cross to help painstakingly identify the bodies of most of the unknown Argentine soldiers who fell during the UK forces’ retaking of the islands.

“We have also made great progress over the last 40 years in humanitarian matters. We were able to identify the remains of more than 120 Argentine ex-combatants and provide an answer to their families, after so many years of uncertainty.”

A third excavation is planned with the help of the Commission of Relatives of the Fallen in the Malvinas and South Atlantic Islands.

The Argentine invasion, greeted initially with patriotic fervour and politically beneficial to the dictatorship, led ultimately to the collapse of Gen Galtieri’s regime as the death toll mounted and the lack of training of a working-class conscript army became apparent.

In total, 649 Argentinian soldiers, 255 British servicemen and three Falkland Islanders died in the conflict. The Malvinas veterans, initially ignored, now have more status, with 2 April a day of memorial.

Ever since the defeat, Argentina has pursued various diplomatic initiatives, including the combative one led by the then president, Néstor Kirchner, from 2003 and then from 2007 by his wife, Cristina. Those 13 years included non co-operation over hydrocarbons and a ban on ships entering Argentine ports flying the Falklands Islands flag.

A plebiscite on the islands conducted in 2013 revealed a 99.8% desire to remain British, and has been the cornerstone of the UK’s diplomatic stance ever since.

In 2016, Argentina reverted to a more conciliatory approach led by the government of Mauricio Macri, but the centre-right former mayor of Buenos Aires fell from power in 2019 after he failed to deliver economic prosperity.
Add Comment