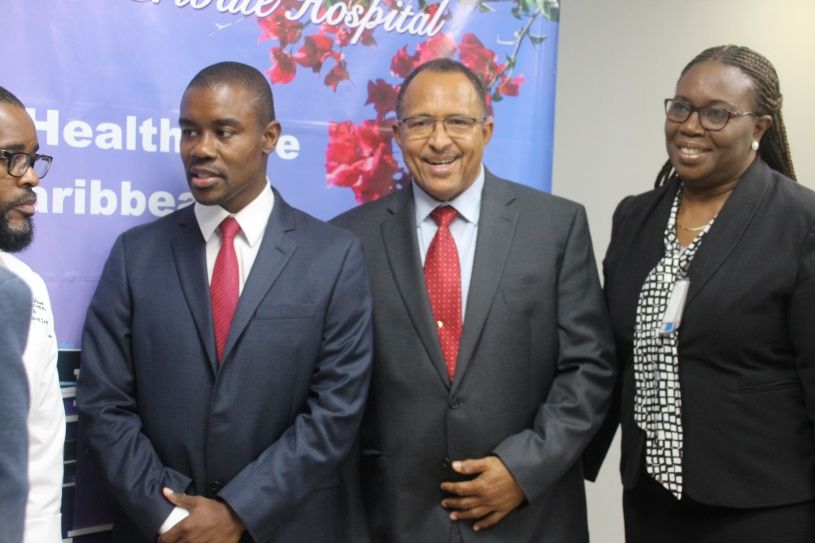 The Bougainvillea Clinic has performed another first historical surgical operation, this time, successfully operating on a female resident who was suffering for years with fainting spells, shortness of breath and other complications associated with an underperforming heart valve that required open heart surgery.

The Bougainvillea Clinic has performed another first historical surgical operation, this time, successfully operating on a female resident who was suffering for years with fainting spells, shortness of breath and other complications associated with an underperforming heart valve that required open heart surgery.

According to the Medical Director of the facility, Dr. Heskith Vanterpool, it was a team effort which involved resident doctor, Dr. Rodger Miller, a cardiothoracic surgeon from Jamaica, who partnered with Senior cardiothoracic surgeon visiting from University Hospital in Jamaica Dr. Sunil Stephenson and the anaesthetic team was led by Dr. Craig Stoutt, a local.

The surgery which was to replace the aortic valve with an artificial valve, was conducted on Tuesday, November 16 at the Bougainvillea clinic.

The operation took a total of five hours to complete and the female patient was able to respond to commands shortly after the surgery and is currently in the intensive care unit (ICU) where she is said to be recovering well.

“This is a fantastic team effort,” Dr. Vanterpool said during a press conference on Thursday, November 18, adding that about 25 persons were involved in the process in various capacities.

“I was quite surprised by some of the things that I saw, the kind of emotions that it generated, particularly when the heart was stopped, there was no breathing for about an hour and a half,” he added.

Doctor Miller explained that it was necessary to stop the heart to conduct the surgery, and so it was intentionally stopped and re-started. Notably, during this period the perfusionist provided circulation and oxygen to the patient’s vital organs by use of the heart-lung machine.

Following the life-altering procedure, the patient was kept attached to the ventilator in ICU overnight, but she was mostly breathing on her own and so the breathing tube was removed from her airway the next morning.

The next morning she was also able to communicate in a normal voice and was able to move without much difficulty in bed.

She is expected to be discharged within five to seven days.

With the first successful open-heart surgery down, the facility is now hoping to lure others from across the region and the world to come to their facility to conduct surgeries of that nature.

“Remember that at Bougainvillea clinic we also have a cardiac catheterization laboratory facility where two experienced interventional cardiologists visit on a monthly basis to carry out coronary angiography, angioplasty and stenting, ”a press release from the facility said.

It continued: “Despite the availability of coronary artery stenting there is still a significant percentage of patients will be better served by coronary artery bypass surgery than coronary stents. Hitherto, these patients have had to be referred overseas for bypass surgery but now we are also able to do this type of surgery right here in the British Virgin Islands.”

This facility has been the first to successfully cure abnormal heart rhythms and conduct a kidney transplant.