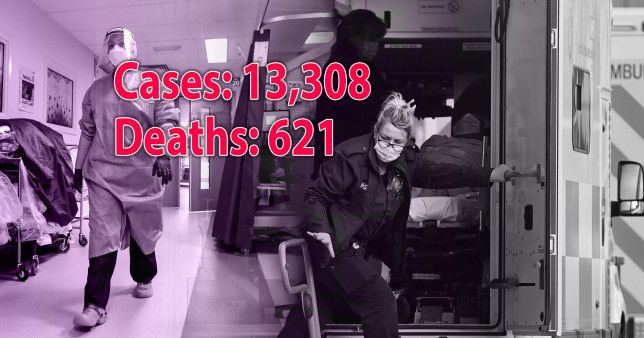 Another 621 people have died with coronavirus in the UK while a further 13,308 cases have been confirmed.

New Government data also showed that more than 544,000 people have had the vaccine in the latest 24 hour period, bringing the country close to the target of vaccinating 15million by mid February.

Hospital admissions for February 9 – the latest date for which the information is available – also show a drop of more than a quarter based on a seven day rolling average.

But a further 436 people who tested positive for coronavirus have died in hospital in England, NHS England said on Saturday.

This brings the total number of confirmed deaths reported in hospitals to 78,588.

Patients were aged between 21 and 100. All except ten, aged between 49 and 89, had known underlying health conditions. The deaths were between January 4 and February 12. 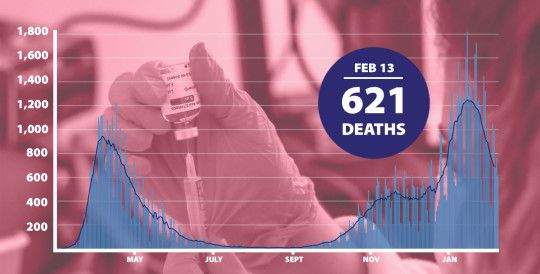 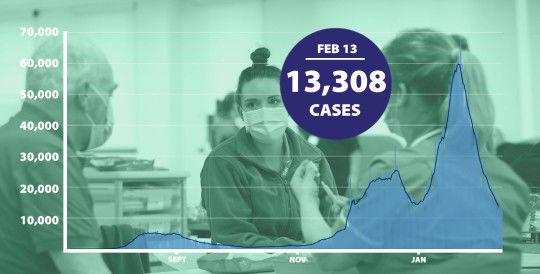 Cases have dropped rapidly during the third lockdown

The latest vaccinations mean 14,556,827 have now had their first dose. The Government want to reach 15million by February 15 and then ease lockdown three weeks later.

Earlier the Prime Minister Boris Johnson said the latest figures mean he is now ‘optimistic’ he will be able to announce a roadmap out of lockdown on February 22.

It’s expected the Government will be able to confirm that schools will be the first to reopen and will do so on March 8.

A provisional timetable for the opening up of the rest of the economy was leaked last night. This suggested non-essential shops would be allowed to open by the end of March with pubs and restaurants soon after, potentially in time for the Easter bank holiday weekend.

Staycations could also begin again around this time but foreign holidays are expected to be off for a few weeks longer due to concerns about new strains of the virus coming in from abroad.

But experts have warned that another wave of infections as big as the one the country is currently experiencing could occur if lockdown is eased too quickly.

Professor Steven Riley, a member of the SPI-M modelling group, said that while the UK’s vaccine rollout has been ‘incredibly successful’, it did not mean controls could simply be dropped.