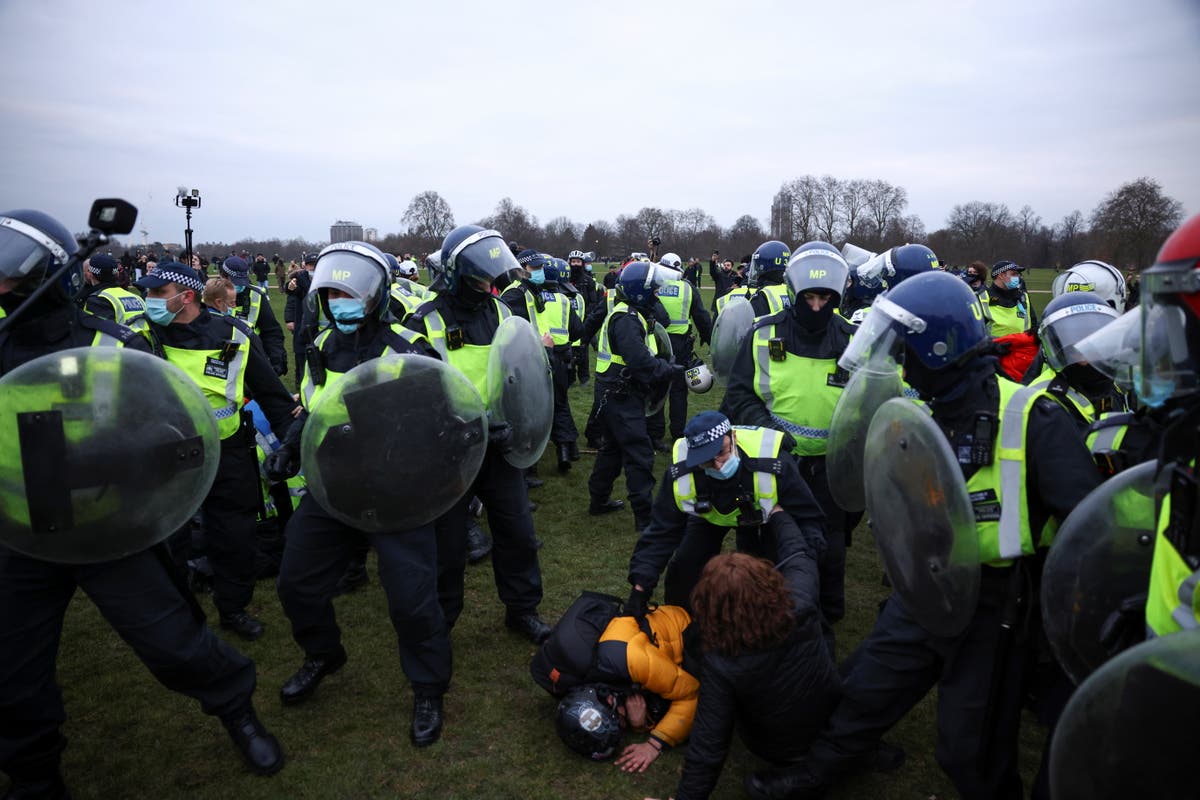 Police were filmed retreating back to their vans after being bombarded with bottles and cans by the protestors.

Covid lockdown protesters hurled bottles at police in ugly clashes with police in Hyde Park on Saturday amid criticism of the Metropolitan Police’s handling of the Sarah Everard vigil last week.

Thousands of protesters, including Piers Corbyn and Laurence Fox, marched through the streets of London.

The protest circled round Hyde Park and continued onto Oxford Street, in defiance of lockdown measures that ban mass gatherings.

Police can be seen striking one protestor with a baton as others try to rip him away from their grasp.

Officers were forced to retreat back to their vans, as protesters threw bottles and cans.

A group of around one hundred chased police vehicles, punching and kicking them, as they left the area following a day of protests around central London.

Members of the public left the park, with small children carried by their parents.

Fireworks were reportedly fired at police in early skirmishes with marchers shouting “Freedom” and “We’re coming for you Boris” as they headed towards Downing Street.

Footage showed officers clashing with protesters as one was pulled to the ground and handcuffed in one of 36 arrests made so far.

Most of the arrests have been for breaching Covid-19 regulations, police said. 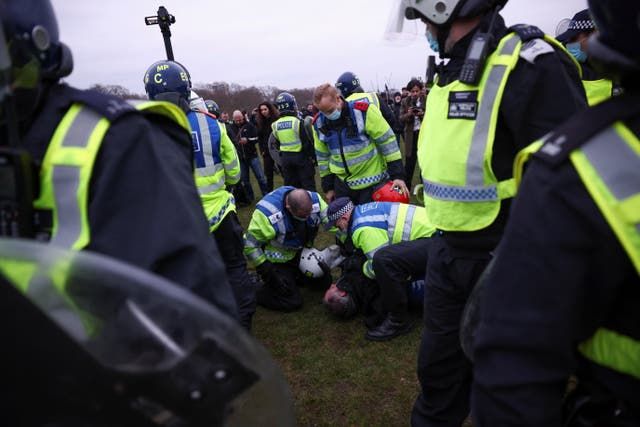 People taking part in an anti-lockdown protest in central London.

Demonstrators shouted “shame on you” at police, with one person carrying a banner reading “stop destroying our kids’ lives”.

Another woman held a sign which said: “Yes sex is great, but have you ever been f***ed by the Government?”

Deputy Assistant Commissioner Laurence Taylor, who led today’s policing operation, said: “This was another challenging day for our officers and I would like to thank them for their professionalism.

“Throughout the day, officers sought first to engage with people who had gathered to explain that their actions were unlawful under the COVID-19 regulations, and encouraged them to go home to help protect themselves and others during this public health crisis.

“Where this approach did not work and officers were met with hostility, police enforced the regulations and made arrests.

DAC Taylor added: “We once again saw police come under fire from missiles thrown by people in crowds, and several were injured as a result of targeted assaults. It is totally unacceptable and saddening that officers enforcing regulations that are there to protect us all were the victims of violent attacks. I wish them a speedy recovery.

“Many of those on duty in central London today should have been in their local communities dealing with violent crime and other local issues, but they played a role in reducing the risk of COVID-19 spreading by dispersing crowds.” 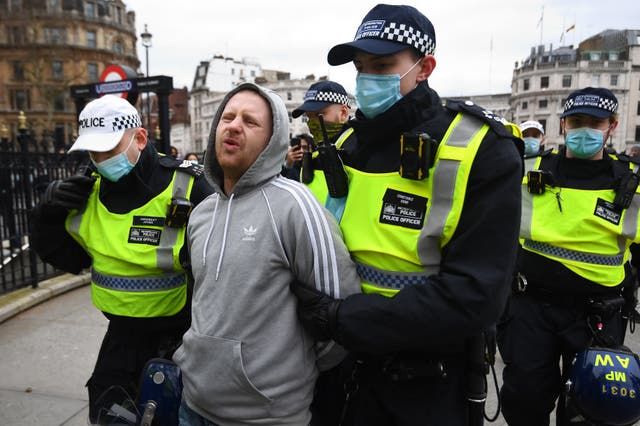 It comes as more than 60 MPs and peers have signed a letter warning that allowing the police to criminalise people for protesting is “is not acceptable and is arguably not lawful”.


The letter to Home Secretary Priti Patel and Health Secretary Matt Hancock was co-ordinated by Liberty and Big Brother Watch.

The letter follows a public outcry over the way the Metropolitan Police moved in to break up a vigil last week on Clapham Common in memory of Sarah Everard. 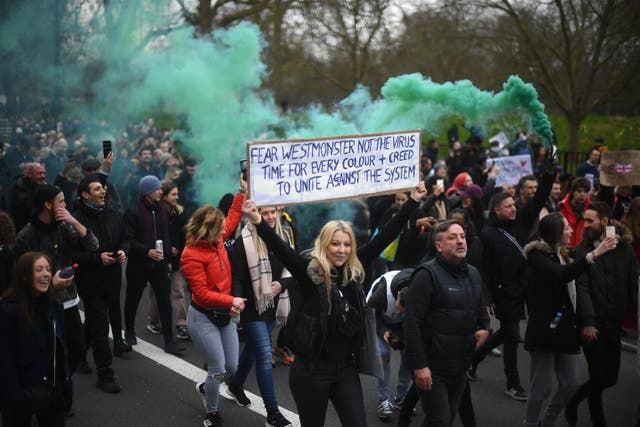 The protest started out peacefully before scuffles broke out at the front of a crowd as police surrounded a bandstand covered in floral tributes to the 33-year-old marketing executive.

Male officers were photographed grabbing hold of several women before leading them away in handcuffs, to shouts and screams from onlookers.

The letter said such “shocking scenes” were “entirely avoidable” if the Government had provided guidance to police and ensured protests were clearly exempt from the ban on gatherings under lockdown.

Sam Grant, head of policy and campaigns at Liberty, said: “In a healthy democracy, protest is a critical way we can fight for what we believe in.

“The Government’s current quasi-ban on protest is completely unacceptable.

“Last week, the police conceded protest is not banned under the lockdown regulations, but used them to threaten then arrest demonstrators anyway. 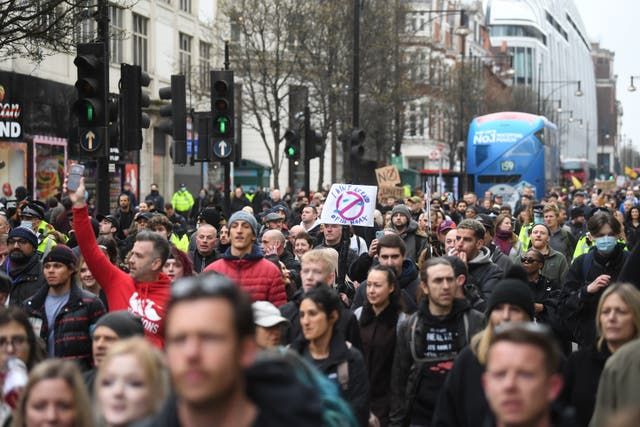 “The Home Secretary must immediately issue guidance to all police forces to ensure socially distanced protests can go ahead and create an explicit exemption for protest in the current regulations.”

Big Brother Watch director Silkie Carlo said: “A country cannot be described as a democracy if people do not have the freedom to protest.

“The harrowing scenes of police officers using force against women at Clapham Common recently were avoidable and wrong.

“Over the past week, many more demonstrators and even legal observers have been arrested or fined.

“This stain on our democracy is a direct consequence of this Government’s disrespect for the most basic of British democratic freedoms.”