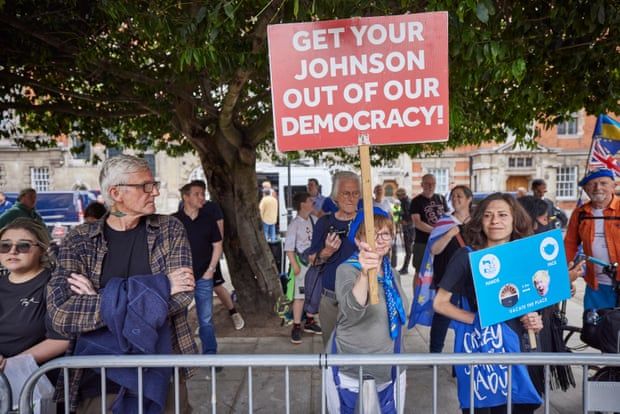 Statements were drafted, alliances were sought, and the PM announced he would quit as days of pressure came to a head

When Nadhim Zahawi released his statement calling for the prime minister to go early on Thursday morning, his allies believed there was a risk he could be sacked as chancellor. He had held the post for two days.

Zahawi, who has a slick and advanced leadership campaign prepared, had taken the role in an effort to show he would act in the national interest. The statement he drafted was the words he used to the prime minister the night before, as part of a delegation of “men in grey suits” telling Johnson to go. The prime minister had sworn to fight for his premiership until his last breath.

But inside No 10, a resignation statement was already being tentatively prepared. “There was always a chance things would change overnight,” a Tory source said.

Zahawi’s letter was public by about 8.45am, but Johnson had already spoken to Sir Graham Brady, the chair of the 1922 Committee of backbench MPs. It reportedly lasted 10 minutes and was “businesslike”. Brady had previously warned the prime minister that he was likely to lose a new confidence vote, planned for Tuesday next week, by a significant margin. The prime minister accepted that was true. He also spoke to the Queen.

Johnson agreed with Brady that a new Conservative leader should be in place by October for the party’s conference. But Brady specifically did not say a contest should take that long. Indeed, the party expects it to be much swifter, perhaps completed by mid-August.

Yet it was overnight – when many in No 10 and No 11 Downing Street barely slept – that attitudes towards Johnson really hardened among MPs. Some who had written resignation letters about legacy and dignity just hours earlier were already clamouring to say he should not be trusted to serve as caretaker PM in the event of his resignation.

Red-eyed MPs blamed a small group in Johnson’s inner circle for letting the farce drag on for so long, after sources close to him insisted it was not “doomsday” and “he wants to stay and fight”. “There were definitely some tears,” one source said. “But I think those came from people who knew that it was over rather than the hardcore.”

One name drawing particular ire was Andrew Griffiths, the MP who leads the prime minister’s policy unit. “He was the one saying, ‘We’re getting back on the front foot, we fight on,’” one MP said. “It was completely moronic.”

But Johnson himself was undoubtably the driver. “There were a few hours over the course of [Wednesday] evening where he was not behaving rationally. He was erratic, deluded. I have very serious doubts about leaving him in charge of the country at all,” an ally of another departed cabinet minister said of Johnson. One MP said people had received texts from people close to Johnson calling them traitors.

By Thursday morning, Johnson knew he had an option to form a moderate and experienced cabinet with caretaker ministers if he chose to go. Robert Buckland, the new Welsh secretary, and Greg Clark, the new levelling up secretary, were part of the package on offer. Otherwise Johnson would have barely been able to patch up his cabinet – with many more ministers quitting and the potential need to sack more for disloyalty.

As word emerged that Johnson intended finally to announce his resignation but stay to see in a new leader, bruised MPs surviving on minimal sleep went back into crisis mode, fuelled by what they had witnessed of his behaviour over the past 48 hours. Dozens demanded that the prime minister go immediately and hand over to deputy prime minister Dominic Raab in the meantime.

The stomach for that fight was diminished after Johnson finally emerged from Downing Street at 12.30pm to fall on his sword, even though many were riled by his description of the campaign to oust him as “eccentric” and a product of “herd instinct”.

A handful of Johnson’s acolytes showed unrestrained anger at their leader being ousted, with a small number of them coming to No 10 to watch his resignation speech. As the Benny Hill theme bellowed down Downing Street, played by long-time stop Brexit protester Steve Bray, the MP Andrea Jenkyns yelled at the gathered crowd. MP Christopher Chope seethed that the party would “rue the day”.

MPs who had clamoured for Johnson to be dragged out of Downing Street have now been entirely distracted by the leadership campaigns. The race is almost comically open-ended, though there are some candidates with a distinct advantage thanks to more diligent preparation.

Over the course of the morning, different MPs said they were planning on backing Rishi Sunak, Sajid Javid, Tom Tugendhat, Penny Mordaunt, Jeremy Hunt and Suella Braverman. Jake Berry and Steve Baker also emerged as candidates taking soundings. Buckland said: “Who knows?” when asked if he would.

Zahawi has a number of “red wall” MPs on board for his campaign, which has been prepared by Mark Fulbrook, an ally of the election strategist Lynton Crosby. The chancellor is being talked about by some as the one to beat – though his decision to stay and serve will mean some MPs never support him.

“His argument will be, at the time that he took the role as chancellor, it was not certain the PM would have to go – but by the next day he told Boris it was over and he still stayed because the national interest meant we had to have some competent people in charge,” an ally said.

Sunak’s campaign is widely expected to be run by his friend Oliver Dowden, the former party chair. The ex-chancellor is said to want a slick operation with an enviable list of names to show he has momentum. Javid has been meeting MPs, with his former parliamentary private secretary Saqib Bhatti tailing him around parliament.

But among the outsiders, it is foreign affairs select committee chair Tugendhat who has the most well-organised operation. “He’s not just got a chair, he’s got a steering committee,” one MP said. Tugendhat, who has no cabinet experience, has been touring constituency association dinners. His aim will be to show that his backers are wide-ranging – from the ex-cabinet minister Damian Green to the red wall MP Aaron Bell.

Hunt is near certain to stand, with an announcement expected imminently, one ally said, but he may well lose backers to Tugendhat.

Braverman is seen as a wild card, but her campaign is deadly serious – and she may be the obvious recipient of votes from the party’s right. She met MPs from John Hayes’ Common Sense Group on Thursday. Liz Truss, the foreign secretary, was flying back from a G20 leaders’ summit in Bali on Thursday to revive what MPs described as a “faltering” campaign.

The race is so wide open that MPs described having to urge colleagues not to stand. One former cabinet minister said a colleague had mentioned out of the blue they were wondering whether to run. Panicking but without wanting to be rude, the ex-minister said they had told them awkwardly to “seek advice from their close friends”. The MP replied: “Well, that’s what I’m doing now” – suggesting they saw the ex-minister as a realistic supporter.

With so many potential names on the ballot, the 1922 Committee is expected to change the threshold for nominations next week. But with so little time, serious candidates are likely to have to get their campaigns under way in earnest by Friday morning if they want to be sure of making the cut.

It may have been a drawn-out and painful departure of the prime minister, but it could be a fast-paced few weeks to come.