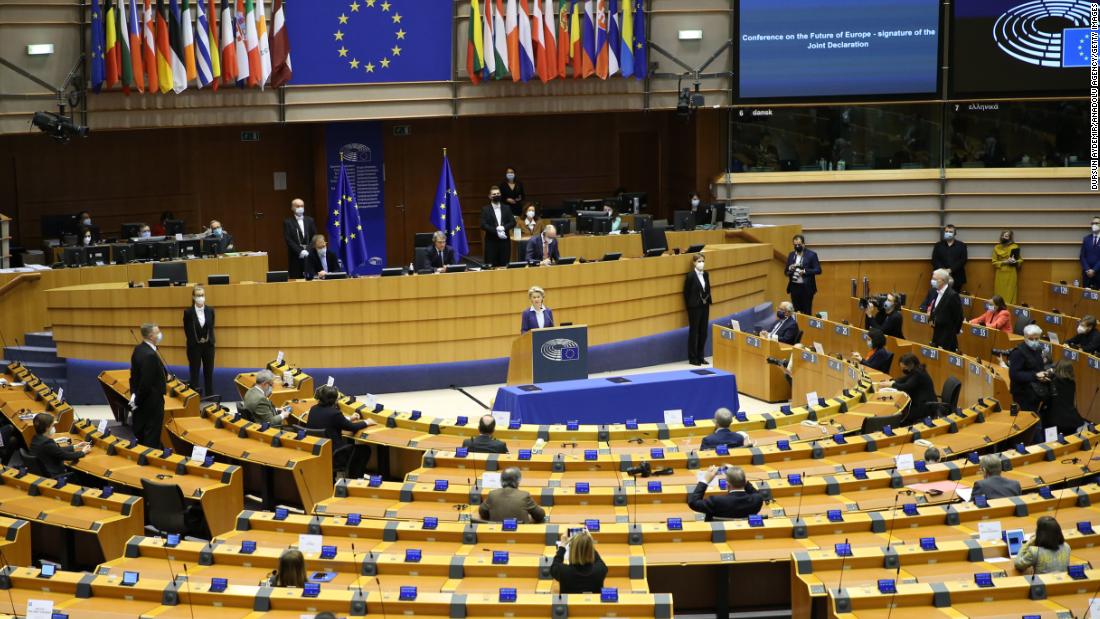 Analysis: The looming crisis in Brussels that no one is talking about

She's been a fixture of life in Germany for almost 16 years. But now the political stability that the country has enjoyed for so long under Angela Merkel is coming to an end as she prepares to stand down as Chancellor.

Until recently, the consensus was that despite standing down and letting her successor fight September's federal election, Merkel's Christian Democratic Union (CDU) and sister party, the Christian Social Union (CSU) in Bavaria, would still be the dominant force in German politics.

Last week, a shock poll placed the Green party ahead of the CDU by a margin of 7%. While CDU sources dismissed this as an expected spike in popularity after confirming Annalena Baerbock as their candidate for Chancellor that will die down, it's long been expected that Germany's next coalition would include the Green party in some way.

Subsequent polls have also placed the Greens ahead of Merkel's party on the "Sunday Question," a weekly survey that literally tracks how Germans would vote if elections were held this Sunday.

"Even if the Greens don't win outright, a decent enough share of the vote would force the CDU to cut the Greens a good deal in a coalition deal as they don't have many options for partners," says Cathryn Clüver Ashbrook, executive director of the Project on Europe and the Transatlantic Relationship at the Harvard Kennedy School.

Despite this Green surge, few are expecting any radical policy changes in Germany, as the CDU have adopted numerous Green policies over the past few years and the Greens have drifted rightwards to becoming a centrist party. Indeed, Cem Özdemir, a senior Green politician, said recently that his party would not be radically changing German policy on NATO, European policy or support for Israel, three issues that had been contentious in the past.

The second of those issues should be of comfort to the European Union's top brass in Brussels. Germany, as the wealthiest and largest member state, carries enormous influence in the overall direction of the European project. Under Merkel, Germany was broadly supportive of the EU's agenda, only occasionally throwing its weight around and blocking certain proposals.

Despite the party seemingly having little appetite to make radical changes within the EU, a Green victory in Germany would mark a symbolic end of an era in Brussels.

The European People's Party (EPP), a pan-European center-right group with members from all EU member states, is the dominant political force in Brussels. It has more elected leaders than any other political bloc in the EU and is the most represented in both the European Parliament and the Commission.

To say that the EPP's leadership is closely aligned with the German Chancellor would be an understatement. And Ursula von der Leyen, the current Commission President and EPP member, previously served in Merkel's cabinet. No longer having a center-right conservative in the Bundeskanzleramt would be the strongest indicator yet that Europe's traditional parties are facing an uncertain future. 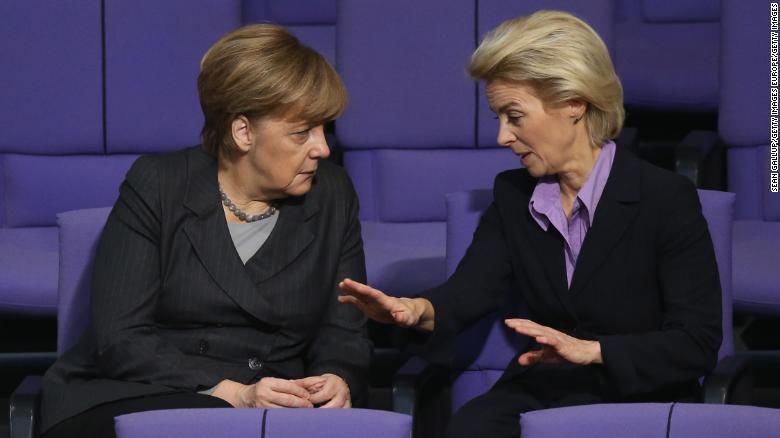 Daniel Freund, a German Green MEP, explains that two of the biggest forces in European politics, the rise of progressive politics versus right-wing nationalist populism, has squeezed parties like the CDU from both sides.

"The CDU has for a while been a shapeshifting party, adapting in response to whatever its biggest threat is. Not long ago that was the far-right AfD (Alternative für Deutschland) so it went anti-Europe and anti-immigration. Now we are eating up its votes, so it makes sense it would move more in line with us," he says.

Diplomats and officials say they now talk openly about the CDU being weaker than it was even five years ago and is looking like a different party. "In all honesty, von der Leyen could easily be a member of the Green party if you look at what she believes in," says a German diplomat.

Even in the event that the Greens don't win, a Green and Black (CDU/CSU) coalition looks increasingly likely and most observers in Brussels think it would be perfectly stable. However, in just over a year's time, it could run into the other volcano waiting to erupt in European politics.

France's next presidential election is looking far from safe for Emmanuel Macron. Politico's poll of polls for 2022 voting intentions places Marine Le Pen, leader of the far-right National Rally, one point ahead of Macron. Her party came out on top in the last European elections and is clearly spooking Macron, who is shifting towards Le Pen on issues such as immigration, and has been accused of Islamophobia for his comments on tackling radicalism. 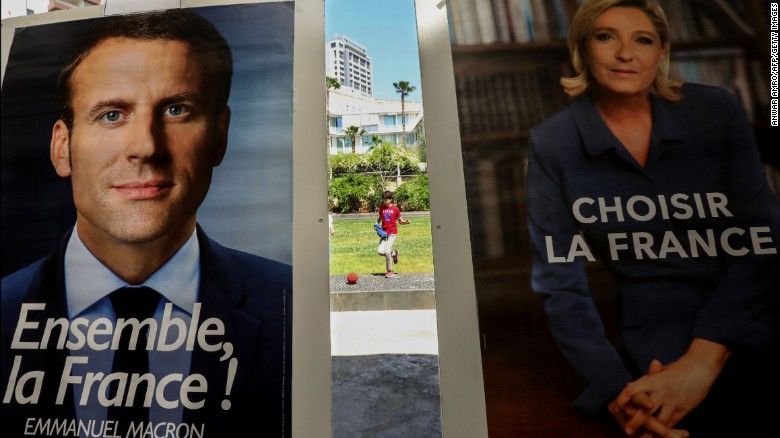 Anyone who has spent time in Brussels knows that if you want to get things done in Europe, you need to get the French and Germans on the same page. A Green-Black government in Germany and Le Pen presidency in France could make this extremely difficult.

"It's hard to see how a progressive, vehemently pro-EU Germany and nationalist France would be able to agree on huge issues -- like our common policy on China and Russia," says a European diplomat.

Le Pen is known to have links to Russian President Vladimir Putin and it could become a major issue if she becomes a blockage on European attempts to deal with nefarious Russian behavior in Ukraine, in its treatment of opposition figures and in its broader aggression around the world.

And while the Green party is hawkish on the matter of China, in a coalition it is likely Germany would continue its policy of trying to influence change in China by dangling the carrot of greater trade. Le Pen has not said much on China, but has warned against isolating Russia to the point of pushing it in to the arms of China, which we can assume means there is some hostility.

More worryingly for EU integration, Le Pen no longer wants to emulate the UK with a "Frexit," but, along with likeminded nationalists, take the whole thing over from the inside. There are plenty of such politicians scattered across the bloc and a nationalist winning the French presidency would be their single biggest victory since the election of Donald Trump as US president in 2016. 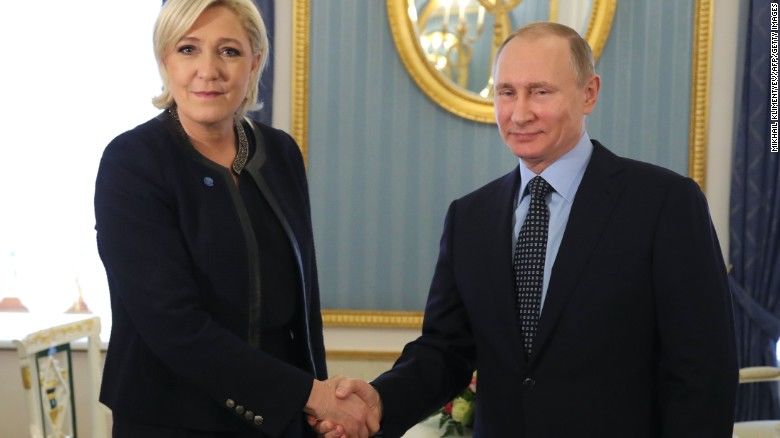 Marine Le Pen is known to have links to Russian President Vladimir Putin.

European politics is changing faster than many in Brussels are willing to admit. "We've already seen big fissures between France and Germany with Macron at the helm. What happens with Le Pen is a total unknown," says Clüver. "I think people are just too paralyzed with fear to think about this, but in reality, it's much more dangerous than the eurozone crisis."

Even in the event of a CDU and Macron victory, the political establishment in Brussels needs to acknowledge that the appetite for something different has been building for a long time. If it doesn't adequately prepare, it might find that old friends in Paris and Berlin stop quite being so deferential to a style of leadership that is increasingly unattractive to their voters.